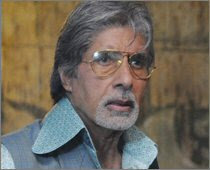 London, May 3 (IANS) Bollywood megastar Amitabh Bachchan is miffed with the soaring budget of his latest film "Teen Patti" and has slammed the crew and unit of the movie.

Big B, as he is fondly called, was recently in London filming alongside Sir Ben Kingsley for the film, but apparently wasn't happy to see the unprepared unit in the last shooting stint of the film, reports femalefirst.co.uk.

"When the film first went on the sets, the budget of the film was a mere Rs. 12 crore and now after shooting for over a year the film has crossed the budget of Rs.20 crore," said a source.

"Big B is perhaps unhappy with the prospects of his film going over budget as no star would like to be in such a situation where his film is finding it difficult to recover its huge making cost especially in the present times of recession," the source added.

Directed by Leena Yadav, "Teen Patti" is a movie on high-stake gambling.

Amitabh plays a professor who tutors the art of the game, but with a cause, to five of his brightest proteges - played by R. Madhavan and newcomers Siddharth Kher, Dhruv Ganesh, Vaibhav Talwar and Shraddha Kapoor.