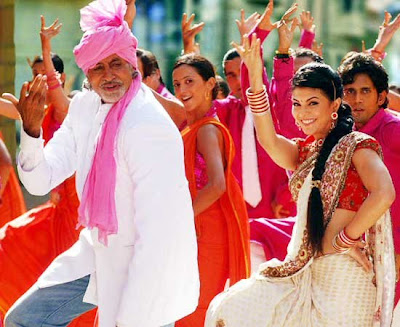 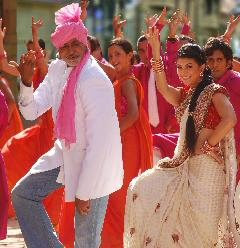 Amitabh Bachchan's celebrated look in the classic "Pag Ghunghroo' from the film Namak Halaal still fresh in our minds, the actor will be seen once again in a similar avatar in Eros International's "Aladin'.

Big B will be seen grooving to a peppy number called "O Re Sawariya' in the celebrated White kurta and Pink Pagadi which he once donned for the film Namak Halaal.

In this sequence, Jacqueline (Jasmine) is trying to woo Riteish (Aladdin) while Amitabh Bachchan (Genie) keeps popping into the scene at various points.

Says Director Sujoy Ghosh, "We had no intentions of repeating his look from Namak Halaal. It is purely a coincidence, but it definitely shows how the actor has impacted our minds over the years through his cult performances."

Talking of the song, Sujoy adds, "O Re Sawariya is a fun filled number and Mr. Bachchan has added an extra charm to it with his unique style and unbeatable energy. We had a great time filming this song and I am sure audiences will love it too".

The song is filmed on Mr. Bachchan, Riteish Deshmukh and Jacqueline Fernandes and choreographed by Bosco Ceaser and Saroj Khan. The soundtrack is by Vishal and Shekhar.

The costumes for the film are designed by Narendra Kumar. - Sampurn Media