I have to admit that the distant country cousin Twitter 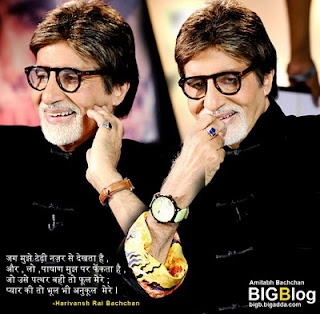 I have to admit that the distant country cousin Twitter, is turning out to be quite an experience. It is contagious. It invites without invitation and immerses you instantly. Its like being in an overcrowded congested room, where, because everyone is speaking all at the same time, it is difficult to hear your own voice - that is if you have one at all !!

So the moment the birds start their morning chirps and you start anticipating the alarm to go off, you actually hit the start button of the Mac to catch the latest Tweet. And all along as you drive to the gym and sweat it out on the machines you wonder when the routines will end so you could get back to the Tworld !

Its been an interesting morning. An eminent doctor from Mumbai an perhaps now retired and settled in Pune, has translated ‘Madhushala’, my Father’s epic of 1935 into Marathi and has come over through my house doctor to present it to me. For those that may not know, and who have interest in Hindi poetry and in particular of my Father’s, it would be of interest to know that the first translation of Madhushala ever was in Marathi. The Maharashtrian home has always had a culture of the classical - in music and in the written word. And it is not surprising that the very first rendition of the epic poem in translation was from this State and from this language, Marathi. The doctors version is another example of the ’sanskriti’ that exists in this part of the world and for it to come from someone that dedicated his life to the medical profession, is not just unusual but most praise worthy. There is more though. The doctor has brought along with him the music director of the Marathi film that was selected for the Oscars as its official entry this year, Anand Modak and he has rendered a composition of the poem into music and wishes to bring out and album on it. I heard the dvd and found it interesting. Madhushala was presented in song the very first time it was recited by my Father, at the Benaras Hindu University around 1937 and it came from a tune that was composed by my Father on his own. It has remained the trade mark rendition since. HMV and Manna Dey brought it to verse and song and music again in the 80’s here in Mumbai and that cd remains the only professional recording to date. But if approved, this Marathi recording would be the second. When I shall perform in Paris in June, I intend to start the evening with the music and song of Madhushala sung personally and in keeping with my Father’s composition.

Later in the day though and almost coincidentally, a group of academicians from a local University come over to discuss and present to me, the work they had done in translating Madhushala in Sanskrit. This is most interesting and when completed would be exceedingly unique. I intend to approve after copyright formalities are done, to publish this work.

But Paris, and as the day for the performance draws near, builds butterflies as large as an eagle within the stomach. Some prayers and words of consolation from the FmXt, would be in order.

Aishwarya left this morning for Chennai right into the thick of the cyclone Laila which has now hit coastal Andhra and Tamailnadu. But she was safe and has started work on Robot with Rajnikant. I was most worried about the weather conditions, but thankfully all went well. Nature has such a distinct way of reminding us all the time that we are such insignificant pawns in their presence. It becomes imperative therefore that we respect it, preserve it and learn to live with its eminence.

My schedules are getting firmed up gradually and as I sense the calendar filling up, I get the impression that very soon I shall be slipping away into commitments that shall keep me occupied for months to come. Its good being occupied. I doubt if many others would consider that, fact. But you know at this age, its worth while getting up to fetch your own glass of water, your own lunch and every little daily chore that may have slipped the mind. Mobility is the word. Stop for a day and or even a few hours and the creaks and pains start to invade your system.

I notice that I am gradually slipping lower into the back rest of the bed, pushing my way through a number of soft pillows, to keep my eyes open and my mind fresh and spontaneous.

Little thin pillow has seen better days and has been removed from sight. Temporarily al be - it ..

Sleep well and in love -