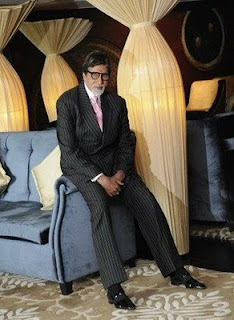 
Mumbai, May 5 (IANS) After presenting Amitabh Bachchan as a cop in "Khakee", now Rajkumar Santoshi will present him as a vigilante in his next action drama, which is a last minute arrangement to utilise the megastar's dates.

Santoshi's "The Outsider" with Amitabh has been temporarily postponed for the lack of proper permission to shoot in the US where it was situated.

"The other project 'The Outsider' was not working out on time. It has become very difficult for Indian filmmakers to shoot in the US. Rather than allow the dates to go waste, I put forward the new project. It's a thriller about a vigilante," Santoshi told IANS.

Sanjay Dutt and Ajay Devgn have agreed to be part of the hurriedly-designed project at short notice only because Amitabh plays the lead in it.

"It's an out-and-out action film. Mr Bachchan plays a vigilante. And yes, Ajay and Sanjay are also part of the project. They also have very powerful parts," said Santoshi.

This is Santoshi's first film with Sanjay with whom he was planning to collaborate on a historical about the partition. But period films are a no-no at the box office.

"The responsibility of doing justice to Mr. Bachchan and Ajay whom I've worked with earlier and Sanjay, whom I'm working with for the first time, is the same," said Santoshi.

The shooting starts in the next couple of months and the crime thriller will be shot both in India and abroad.

"We'll be shooting the film in India and Dubai. Mr. Bachchan will be seen as a master of disguises. For his special disguise, we're getting makeup persons from Hollywood. And he'll be performing stunts like we've never seen him perform," said Sajid Nadiadwala, producer of the film.

"We're getting stunt co-ordinators from some of the top names who have done the action in A-grade Hollywood films recently. I can't reveal names of the stunt guys and the makeup guys from Hollywood because we're under negotiation. And you've to hear the dialogues Santoshi has written for Mr. Bachchan. They're the best I've heard since 'Deewaar'," he added.