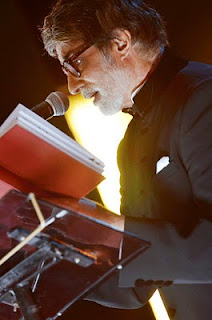 BigB read Madhushala 3 volumes of the Bachchan Rachnavali in Bhopal  MP
Bhopal , MP      Mar 5 , 2011       Sat 2 : 33 PM
These should have been up yesterday but the problem of up grading the system that I write this blog on and the subsequent disappearance of the site, prevented it. Pictures were not loading up and so went back to the technicians and they resolved it so there …

Just the 3 volumes of the Bachchan Rachnavali, or the anthology out of the 9 that contain his entire works, up at the rostrum before the performance last night. There is a hidden attraction is there not, in holding weather beaten leather bound books. There is a sense of passage of time, of age, a certain antique value … and in a peculiar sense, a reverence !!

My Father looks upon me on stage, his strong piercing eyes assessing the worth of my rendition of his creativity .. and someone mentioned on the blog after reading the reincarnation story of how I now do indeed look more representative of my grandfather, because the age of my Father’s photograph behind me is less than what mine is today .. a novel observation ! Thank you !

For those that came to the Paris show, a bit of nostalgic similarity in the dress .. I always feel comfortable and respectful in not changing the attire .. the shervani and the pathani pyjama and my trusted shoes, bit narcisstic with the golden B .. but how does one refuse a gift ..!!

A limited accommodation and limited acoustic ambience when you compare it to Lincoln Center, or the Theatre du Champs Elysees in Paris … it is a college auditorium after all and will have limited resources and means. That though is not the criteria. Its the thought of presenting it for the students and the faculty and their graciousness in accepting my offer ..

At the podium in rehearsal .. and the looming picture of my Father almost overpowering, enveloping .. in blessing and in protection .. giving strength and accreditation ..

And when it all was over, introducing the wife - the daughter of Bhopal - to the gathering. She has come in for a few days to be with her relatives and her home here ..
As the ‘jamai’ of this city, the son in law .. it is a prerogative and culture that the city takes pride in welcoming us and traditionally to look after us. The city has done that in abundance. The city gave their daughter to me, with the known understanding that I look after her for the rest of my life. This makes the ‘jamai’ a favored person whenever he shall visit his ’sasural’, the home of his ’saas’, his mother in law. Such beautifully bonded our traditional beliefs and rituals, to keep relationships together. To give the ultimate preferences to the family, its longevity and togetherness. The joint family system, which the west has never understood or practiced. And I am so proud of the response that Abhishek gave to Oprah Winfrey when he and his wife Aishwarya were on her show in USA.
She asked Abhishek - “I believe you and your wife live with your parents. What is all that about ?” she giggled in mock surprise. And Abhishek responded - ” Do you live with your parents, Oprah ?” and when she nodded in a negative, he retorted - “So .. what is that all about !” and the entire audience went into a huge applause and laughter, including Oprah !
It takes effort and perseverance to make that just balance in a family that lives together. The various benefits of its existence, its functioning, are at times difficult for the west to understand or even accept. But there has been merit of it. Not all in the east of today would entirely agree either. There is great consternation on its continued form. But the purists and the elder, who have always been given immense respect in our society, pursue and persist for its continuance. I like the idea of a full house. Of millions of relatives running around, of joint gatherings of the family, of conducting various activities together, of sharing pain and excitement, of lending each other to the other, of free exchange, of care and concern in the others circumstances, of welcoming each new entrant into the family and making them our own. Of the volunteered help that comes unabated, the attention in crisis and difficult times. And then the festivities and the charm and dignity of its performance within the house, each member an important participant. Its an entire world of private existence and it is so so wonderful.
I never made any effort to replicate my feelings in the way I have just described, with my EF, my extended family. And I have no idea why and how it came within me to address you thus. But now that I have and now that I find it flourishing of its own accord, geared and driven by all the incredible members of this blog, it represents to me, that joint family, that I so desire and am comfortable with.
We are all islands of singular individuality. We have the capacity to survive alone and not be too bad at it either. But what has been fascinating for me is the fact that we reached out and held each others hand, in a unique gesture of being one. And once we did that we realized, I would like to believe, how necessary it was for all of us to do that. To reach out. To give and share and be of concern. To think in unison and to gather around on this common platform, whether related or unrelated in common cause !
My love ..
Amitabh Bachchan
Source:  Big B Blog bigadda
Posted by Mahendra at 12:12 AM