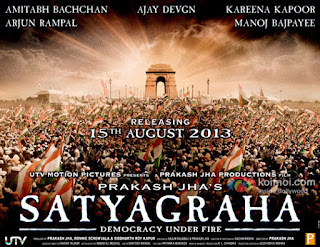 Ajay Devgan becomes kejriwal and Amitabh Bachchan Anna
We all know Anna hazare started the fight against corruption and every Indian has witnessed it. Now its time to watch “SATYAGRAHA” on silver screen will be directed by Prakash Jha. The lead role of the movie Amitabh Bachchan playing Anna Hazare and Ajay Devgan playing Arun Kejriwal. Prakash jha is well known for making filim’s based on real subjects and “SATYAGHRAHA” is his next project.
Before also Ajay has work with Prakash Jha in the movies like GANGAJAAL, APAHRAAN in which Ajay played real life roll’s. Ajay is doing lot’s of hard work to play this character e has joined a workshop o his character can be presented well on the screen, Prakash Jha say’s actor like Ajay don’t need a workshop to play any character for this session we don’t call it training its only a part of reading because actor like Ajay don’t need acting lesson’s.This movie is based on true story but after seeing this movie you will come to know it’s a story of today’s political incident’s many character’s from the movie well be familer to our  audience. In today’s date what ever scam’s, corruption going in our country you will  see on silver screen that’s the thought of Prakash Jha on  “SATYAGRAHA”. Watch “SATYAGRAHA”
news bigbangbeat