New Delhi, June 2 (IANS) Australia's Queensland University of Technology (QUT) has asked Bollywood superstar Amitabh Bachchan to reconsider his decision to decline a honorary doctorate in the wake of a series of racist attacks on Indian students in that country.

In a letter in response to Bachchan's denial to the doctorate Saturday, QUT vice chancellor Peter Coaldrake has expressed his respect for BigB's decision.

"We understand your dilemma and fully respect your decision about the difficulty of accepting the award at this juncture," Coaldrake said in the letter, a scanned copy of which has been posted on Bachchan's blog at www.bigb.bigadda.com.

The honorary doctorate for his contribution to the world of entertainment was to be conferred upon him in July at the Brisbane Film Festival where a retrospective of some of his best films is also to be showcased.

But the actor declined to accept the honour due to "emotional" reasons.

Now, on behalf of the university, the professor has approached the 66-year-old star again and said: "If and when it is appropriate, your further consideration of the honour will go a long way in enhancing the mutual understanding between our two countries....

"You are in a unique position to play a leadership role in healing wounds that must be healed.

"We sincerely hope the circumstances improve and that at a later day, the opportunity will be available to acknowledge your contribution," he added.

New Delhi, May 31 (IANS) Bollywood megastar Amitabh Bachchan and his actor son Abhishek shot a sequence for their upcoming film "Pa" Sunday in the Delhi Metro.

The father-son duo alongwith actress Vidya Balan shot the sequence for the film in a to-and-fro journey from Dwarka Sector-9 to Yamuna Bank and back, spending around four hours in the Delhi Metro Rail Corporation (DMRC) premises.

Posted by Mahendra at 6:23 AM No comments: 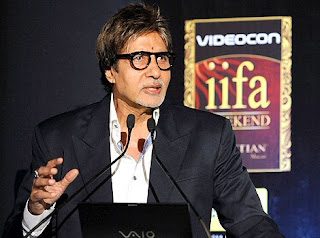 Actor and IIFA Brand Ambassador Amitabh Bachchan addresses a press conference in New Delhi. The annual International IIFA Awards 2009 will be held at the Venetian Macao Resort Hotel at Macau from June 11- 13.
Posted by Mahendra at 5:25 AM No comments: