Plot Summary: Aarakshan is the story of Prabhakar Anand (Amitabh Bachchan), the legendary idealistic principal of a college that he has single-handedly turned into the state’s best. It is the story of his loyal disciple, Deepak Kumar (Saif Ali Khan) who will do anything for his Sir. Of Deepak’s love for Prabhakar’s daughter, Poorbi (Deepika Padukone), of his friendship with Sushant (Prateik). It is the story of their love, their lively friendship, their zest for life, and of their dreams for the future. Centered on one of the most controversial issues of recent years, with the Supreme Court’s order on reservations, the story suddenly becomes a rollercoaster ride of high drama, conflict, and rebellion, which tests their love and friendship for one another, and their loyalty to Prabhakar Anand.

Review: Solid performances, hard hitting subject matter, more than a few tear jerking moments, unbiased treatment. What else do you need in a good film? But film making aside, there is a greater good involved in this film. It’s not just about Reservation and quota and what’s right or wrong. It’s simply about the importance of education and everyone’s right to acquire it. When schools are free and every child is treated as an equal, why wouldn’t there be equal opportunities, right? Hence, it is definitely a film everyone MUST WATCH. 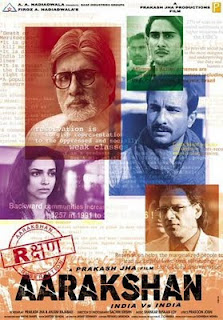 That doesn’t’ mean it’s a perfect film. Yes, the first half has a song too many and the whole film is a little lengthy and exaggerated but that’s all right. Things have to be exaggerated in order to grab attention. Just like in an advertisement – you have to exaggerate it to sell anything…but that doesn’t mean the product is any less potent or doesn’t do the job.

Simply put, ‘Aarakshan’ is about Prabhakar Anand (Amitabh Bachchan), the legendary idealistic principal of a college that he has single-handedly turned into the states best. Anand is seen caught in between a world for and against Reservation. Centered around one of the most controversial issues of recent years, with the Supreme Court’s order on reservations, the story suddenly becomes a rollercoaster ride of high drama, conflict and rebellion. Deepak Kumar (Saif Ali Khan) a Dalit junior professor & Sushant (Prateik), the son of the rich college trustee, former friends; now find themselves fighting on two sides of the  issue that threatens to ruin much more that their friendship. Poorbhi (Deepika) is Prabhaar Anand’s daughter, who gets caught between loyalty for her Father and her love for Deepak.

How do all of them find a way out of this dangerous and painful situation? And yes, they do find a rather inspirational solution. Watch to find out.

The solid performance that each cast member pulled off definitely adds weightage to the film. Saif is sincere and bankable as usual. Deepika manages well given her limited range. Manoj Bajpayee and the rest of the cast fit perfectly well in their OTT roles. No prizes for guessing that Amitabh Bachchan as the idealistic and principled old man is the hook, line and sinker for the film.

In short, an absolute must watch. Kudos Mr. Prakash Jha for your guts and sincerity.

Verdict: Our education system needs a revolution. This film has the potential to start one.

Posted by Mahendra at 4:33 AM No comments:

The first public showing of "Aarakshan" .. and I have cried throughout .. not because of the film ..yes the film does have those moments too .. but because an art form of such intense creativity should be kept away by banning it in certain States of this our beloved country.

I stood, as did all of us at the beginning of the show when the National Anthem was played, and sang along with perhaps a handful of others in the sincerest of emotion and belief in an anthem that brings all of us to our feet in respect dignity and most importantly, our pride.

And as I come to learn hour after hour the various objections and restrictions that various states raise in banning this creative art form, this example of one of the most significant tenets of our Constitution - the freedom of expression, I read and reread the very first stanza of the Anthem -
O ! Dispenser of India's destiny, thou art the ruler of the minds of all people ..
I am saddened that India's destiny, the dispenser of which rules the minds of all people, has no effect on those minds that sit in the most august houses of our legislative assembly, those very people that take on oath the truth of wanting to protect the integrity and sovereignty of this nation, pander to unsubstantiated rumor and belief, without as much as any verification of its validity.
Without any knowledge of what the film contains, without any desire to determine in the truest and most basic principles of law in democracy, fact. It has merely strengthened my and many others fears the weakeness it conveys in our belief in governance and its ethics.
UP, Punjab and today Andhra Pradesh have given notice to ban the film and not allow it to be projected for another 2 months - a provision given administratively to each government. After that period is over the film can have exhibition and … the Producer is not obliged to carry out any changes that the administration in governance may have found, because the film technically and legally has found certification without a single cut !! What good will 2 months do then in the law and order situation - the reason given for the non showing of this product ! So the same film is a law and order problem now and today but shall not be a problem after 2 months ?? You will destroy the commerce of the producer and all those that have invested time blood tears and money into this film, when even after waiting for 2 months there cannot be any change that will be accepted to be done !! What is the need then of the Censor Board, a statutory body instituted by you, the legislatures and Parliamentarians that govern this land. You nominate what you believe, to disbelieve what you nominate !! Better to remove it altogether then rather than give it disrespect.
I do not care and never have cared about the fate of any film of mine, and I never shall. I do not care if this film does well or not, but I shall admit this … this film has shown a mirror to the country and to one of its conditions. This film has shown a path that needs to be taken for a better and more secure future of this country. And if God forbid this film fails at the box office, it shall demonstrate to a large extent the failure of the reality in the country, that today it struggles with.
I shall believe and will always believe in the words that Dr Prabhakar Anand pronounces during the course of this film -
Is desh mein do bharat baste hain .. aur sahi mano mein agar hum samaaj mein parivartan chate hain, toh in dono ke beech ka jo antar hai use mitana padega ..
'Two India's reside in this country .. and truthfully if we have to see any progress in our society, then the distance between these must be erased ..'
Disturbed as I am on the happenings that one endures every hour, I am deeply disturbed by what a person of the eminence of Rajdeep Sardesai, owner controller chief of CNNIBN has to tweet regarding the film -

only 2 winners in aarakshan debate. prakash jha whose film will now 'sell' and ramdas athavale, dalit leader who has struck a 'deal'
For you Rajdeep, a journalist of such esteem, all that attracts you to a film you have not even seen, is the factor of its 'sale' and the 'deal' that it will strike - an accusation that does not even have the basics of journalistic respect and truth. For those that have through years constructed something of such value, that its value may never be evaluated, all that you can sarcastically put across in typical word play that all journalists follow is, how amusing it can sound. That is so regrettable. Particularly so, because in a moment of truth you had disclosed to me privately, of how your idealistic periods of training were such a revered moment in your career. Is this a reflection of your reverence. Is this what it taught you ? Go see the film Rajdeep, like it or dislike it, but I shall challenge you that you shall not have a word in disregard to the motive and bearing of the film. For, this film will have the capacity to make you think and nod in approval towards many truths, a desire that I would have and shall expect from people of your standing.
Amitabh Bachchan
--
Mahi

Posted by Mahendra at 2:55 AM No comments: