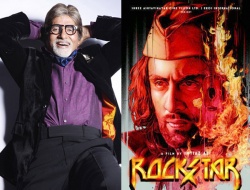 
The film frat can’t stop raving about Imtiaz Ali’s ambitious filmRockstar, and Amitabh Bachchan is among those who immensely liked the musical love story starringRanbir Kapoor and newbie Nargis Fakhri.
Though Amitabh is elatedly waiting for the new member of the Bachchan household as Aishwarya Rai’s due date is supposedly around mid-November, he took some time off to watch the film Rockstar. “It’s late but not without cause... just back from RockStar and living in the brilliance of all - Imtiaz Ali, Ranbir, AR and Nargis... Still with RockStar and its beauty,” writes Big B on twitter. Amitabh also writes about A.R. Rahman’s soulful music in the film. “AR Rahman music takes a while to grow on you and when it does, difficult to let go ..been with RockStar music whole day .. even now !” Rockstar opened big on Friday. Directed by Imtiaz Ali, the movie chronicles the journey of an aspiring singer Janardhan Jakhar, and how he falls in love with a Kashmiri girl Heer Kaul.
Posted by Mahendra at 4:37 AM No comments: 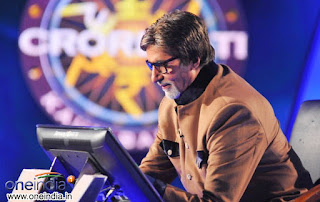 With the finale of Kaun Banega Crorepati 5 being aired next week, Amitabh Bachchan says it is hard to say goodbye to the popular game show. “The recording for the finale for KBC took place today (Thursday) and it took an entire day to do so. It has been an exceptional season this year and when one leaves such environs there is bound to be a deep feeling of not wanting to depart. All the little little things that made up these extraordinary days on set was of a very distinguished quality,” Big B posted on his blog. The last episode of season five, which started August 15, will be aired November 17.
“A routine had been set, people worked to maintain a sense of togetherness in all these days. And today one had to say our ‘bye byes’. Tough when you have to do this, but I guess you must bury the old so that the new prosper. The new will indeed take over, and should. But in a most deserving and disciplined manner,” he added.
The 69-year-old had made his small screen debut with Kaun Banega Crorepati way back in 2000. And since then, the megastar has hosted four out of five seasons. The third edition was hosted by Shahrukh Khan. The first three seasons were aired on STAR Plus, but from the fourth season it was telecast on Sony with Amitabh as the host.
With the underlying belief that ‘Koi insaan chhota nahi hota’, this season saw people from India’s interiors participating. Of them, Sushil Kumar won Rs. 5 crore and Anil Sinha Rs. 1 crore but there were many others who won large sums of money, fulfilling their lifelong dreams. Thanks to all this and Amitabh’s mass connect, the show managed to generate the highest rating of a non-fiction show by registering 7.2 TVR (television rating) and 8 TVR for two episodes whenaam admi Sushil Kumar won the Rs. 5 crore jackpot. It was telecast in two parts and reached out to 25 million people on November 1 and 27 million people November 2 respectively.
Posted by Mahendra at 4:32 AM No comments:

An excited would-be grandpa Amitabh Bachchan seems irresistible to have a glance at the yet-to-born new member of his family. The Bachchan bahu Aishwarya Rai is all set to give birth to her first child in November mid."The family gathers together from all over as we wait for the 'arrival' ... Greatest joy for me - a full house and the 'chahel - pahel' (hustle bustle)," Amitabh Bachchan posted.It's not only the Bachchan family, but the entire nation is eagerly awaiting the arrival of the new baby. Aishwarya Rai's yet to born baby has turned out to the most awaited celeb kid till date.
Posted by Mahendra at 4:26 AM 1 comment:

An entire day singing glories of the film ‘Rockstar

Jalsa , Mumbai              Nov  13,  2011               Sun 11 : 56 PM
An entire day singing glories of the film ‘Rockstar’ … sending letters and flowers to some concerned people on the film and to receive their equal affection .. listening to the music and allowing it to grow as does all Rehman’s music … and then again to allow its background as I write .. beautiful ! I wish that my words can contain the beauty of the chords, lyrics and voices of the music.
The Sunday with the fans outside the gate and the sudden meeting again with Ef in their midst – Renate and Nandita … rescuing them almost from getting crushed in the melee .. a joy and a pleasure to meet them again ..
But most important of all .. the day spent in splendor with the family, recounting relocating and realizing the great times with them in earlier days … that incident, that particular photograph and the laughter and recollections … they are the best of times !!
The truest chords and notes of music bring such a great feel of emotion and feeling .. a moment difficult to describe. You tend to feel it with some degree of involvement, but then after a while you allow it to take over your life and being .. free from all encumbrances, worries and thoughts .. such a cure, such an exalted feel .. god like !!
And then … you feel so empty and insufficient. The desire to do so much more with so much more intensity that you almost get lost in its purpose. Inspiration if not transferred immediately to creation would mar all future progress ..
I must resist being idle, but simultaneously look for that which is inspiring and not routine and mundane ; done before a million times. Perhaps it is time to make that change, or at least venture into a realm that promises change. Change hurt no one. At best it would fail and drop, but at least it would have been experimented with … and with conviction …
I read many folders that claim they are interesting .. they claim not I .. I must feel the desire, or if not then give some that do, that can exploit the germ in me and give me challenge and competition .. I wish and must explode, to drop all selfness in a heap by the door of exploitation and move to where they give me what they want on their terms, not mine. Its not that I fit into what they give but quite the other. I must give what they can fit me into.
O ! Lord ! bring me that challenge and hope of intent. Give them the sense of what I would be challenged in and may they make judicious decision. Let them develop and let me be given to develop. I must get out of the morass and the depression of that which is the norm. I need to be abnormal, wild and loose. In my thought and purpose. I need to be able to deny, to refuse, to revolt almost in the sensitivities of what is on offer .. to stop the niceties of decorum and form, to stand upright and defy almost at the cost of being disliked .. disliked in a nice way …
I brim over with thought. I brim over with desire. I brim over with capacity and explosion ..
I must and I must soon … or else …??
Amitabh Bachchan
Posted by Mahendra at 4:06 AM No comments:

Is it just me or does this occur with others too

Jalsa , Mumbai          Nov 12/13 , 2011             Sat/Sun  1 : 47 AM
Is it just me or does this occur with others too ; moved by sentiment on seeing or being part of inspired creativity … a desire to be in part a portion of it … to lament that fact that not being among those that create it is great disaster … to wonder what it would have been like to have lived those moments with them.
And this then is the reason for this late post, this beyond my doctors recommended timing, this liberty I take when it becomes difficult to control the insides …
Creativity has many manifestations, colors and attitudes. But among its many and varied qualities, there is but one certainty. When it touches a chord it is impossible to ignore it. There is desire to talk, write discuss it with some immediacy. To share and hope that those you share it with have the ability to appreciate what you appreciate.
And so I write with some rapidity. To share and express that which impresses me and moves me to this condition. A condition I have trouble getting into … not because I have trouble with it, but that when I do I live with it for great amount of time.
I would imagine that appreciating an aspect of creation would be as important and valuable as the act of creating itself. The relevance of inspired reflection one from the other is a most potent force according to me. If I do not have knowledge of the existence of the other, then I would be foolish to imagine that there is but one and one alone. One of the biggest fallacies of existence is to believe that one is the best and that no other exists. Turn the corner and you shall find a hundred others, equally if not more talented and proficient than yourself. To discover other talent and expertise I would imagine, would be the foremost task of any to accept it in a temper of gaining from it, rather than diminishing its achievement. Ignorance of the other or an imbecilic blind eye to another of value would be disastrous. Who would one compare your greatness with then ? When there is no other, how can one proclaim they are the best ?
And so I welcome the contributions of more. I welcome them so we educate ourselves of being able to look at the level at which we are. Not them, we. In the reflection of the other, or of their shade or shadow will we ever be able to determine one from the other. If there is no 1 to 10, how on earth can there just be a 1 ?
Many by now shall wonder what it is I speak about. There is no need. I speak in general. Or maybe I speak with incident. But of that later …
I worked at the closing of KBC during the morning hours and I am observing the response to my presence on the streets. Some months ago I was on similar location and other than an occasional wave from a passing vehicle, there was nothing much to be acknowledged on me. But some months on there is a marked difference. People follow you, they stop and join in the crowds that collect by the road. They show respect. It is not the young screaming and fainting in your arms kind of environ. It is more a smile, a folded hand in greetings of a ‘namaste’. And I wonder .. artistic creation can and does have a life span particularly in the profession that I find myself in. A failed project and the numbers diminish. A successful project and the opposite happens.
So what really has been the difference. I have no films of merit on release. All I have is a television programme which apparently moves well with the audience. Could it be that that then is reason enough for them to notice me in renewed form. One never knows with audiences … they rule and they guide ..
I wonder how they guide now ..
Good night and my love ..
Amitabh Bachchan
Posted by Mahendra at 4:02 AM 1 comment: