HANUMAN CHALISA SUNG BY AMITABH.ON k.b.c 4. 1 OF MY
Posted by Mahendra at 7:14 AM No comments: 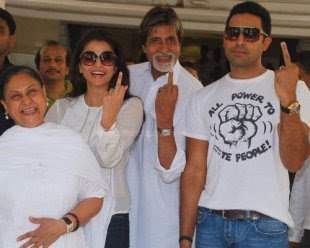 Jalsa , Mumbai      July 20/21 , 2011        Wed/ Thu  1 : 38 AM
There is soft music playing during the lunch organized by the ladies in the house, distant nostalgic and old world songs by the the greatest, Lata Mangeshkar. I cannot say why I put it on, but on I did and for some reason the food the atmosphere the bearing while we on the table seemed most receptive, calm and digestive !!
In the West grace forms the reverential beginning of the meal. In our part of the world a gentle prayer, a sprinkling of the water around the thali or plate in front of you, an eyes shut and touching the food first with the hands and then to the forehead, as would be done in a temple before the deity forms the general routine.
Food has been considered close to divinity at all quarters. Its what we are born with, to exist, to grow, to keep our systems alive and active. Its what we work for, study for, live for and continue for. In Hindi we often respond to a question as to why we do certain things, or when you query me on why I work so hard, with a ‘paapi pet ka sawaal hai’  … ’tis the question of the sinned or evil stomach … !!
The stomach forms our main body part. It controls our health and bearing. It is the point of the umbilical chord, often used metaphorically when describing the beginning or the life of any situation. It is also the muscle that is most frequently used, apart from the tongue. If the stomach is right all else is.
It needs the reverence it gets. I have no objections to it and no issues either. But look at what it entails - diet and food and delicacies and different kinds of millions of eatable categories to keep it healthy and pleased. When it gets upset with what you load it with, it retaliates, throws it apart. Its an obedient part, which when treated with honesty and reserve, shall deliver.
It is thus natural  then that human kind paid attention to it in large measure. And hence the prayer. A thanksgiving in what we are respecting … ‘For what we are about to receive , may the Lord make us truly thankful, .. for Christs sake … Amen !!!’ , is the common ‘grace’ said before each meal as we stare at the array of delicacies before us. But in many ways it is a thanks giving to the Lord for having provided, for, there are millions in the world that never get provided ! There is a joy in feeding. The wife gets the complete satisfaction when she feeds the husband and the child. ‘The way to a man’s heart is through his stomach’ .. !! The cook and those that cook get the greatest satisfaction when they prepare something for another. There is nothing more satisfying than to see the expression of the hungry after they are fed. Its Godly ! I cannot say about the West, but here in our country there is a certain shyness when you give the food. I have observed that they take the offering and move away to some secluded spot and eat almost in secrecy. The pet dog when given something out of schedule shall move away from where he received it to a private corner and devour it without being disturbed. Want to annoy your pet while he is at meal time, go and disturb him or her. There she be a sharp dislike irrespective of how obedient they are for most of the day.
What a lot of etiquette and design has gone into preparing stuff that feeds us. What aesthetics have been put in place to reflect the process of the meal time. And so much more … it is simply so fascinating… !!
A newborn child shall not know how it should speak, but knows where the mouth needs to go to be fed ! Conquests wars and battles have all centered around the fact that usurping another territory meant the security and guarantee of food.
Food is the blessed component of our existence and hence the reverence and prayer for it …
‘ya devi sarva bhuteshu khshuda rupena sansthitha .. namastasyaee, namastasyaee, namastasyaee namoh namaha’
Invoking the goddess to feed us .. and in prayer !!
But the most endearing moment of the day. A film recovered by Jaya of our wedding, June 3, 1973 and to see my parents alive and moving .. to see Jaya’s father and relatives alive and moving .. to see so many of us younger and innocent and without care …
And now …. ??
Good night and love …
Amitabh Bachchan
Posted by Mahendra at 12:18 AM No comments: