My Mother birthday She would have been 92 years today BigB 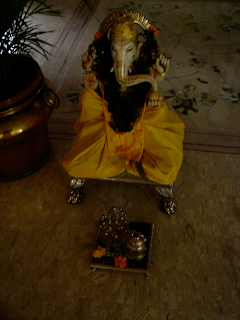 Singapore singapore
august 12th 2009
Wednesday 10:25 pm
http://bigb.bigadda.com/
August 12th ! My Mother's birthday. She would have been 92 years today ! Flower 'torans' would have been put up at all the gates at Prateeksha, Jalsa, Janak and Sopaan in New Delhi. Her room decorated with her favorite flowers, the red rose - she loved flowers -  brought a smile on her face even if she was indisposed and a 'whoop' when better. She loved gifts - small, cute and those full of feeling rather than those with a heavy price tag. A bottle of perfume, a box of chocolates, little trinkets, books to read. In her later years we would dress her up in new clothes, bright pastel shades of the 'salwar kameez', her hair done up by the nurses in attendance, a dash of her favorite perfume about her, her face bright and eager, seated on her chair she most spent her time on, and one that had been strengthened to carry her weight when she wanted to come down from her first floor bedroom, down to the hall, where she would sit in her Alzheimers condition, anxious to open the gifts that we had brought for her, with her own hands.  Her quivering, soft gentle hands would unwrap the gift paper as a child would, impatient to get to the goods underneath them. And once there she would lift it up gingerly , read the card and without saying a word, would look at the one who had gifted her and blow a soft kiss towards them, her fingers, a bit twisted with the arthritis, barely having the strength to reach her lips.

Head bent, she would sit there, quiet and looking no where, till we would urge her to come and blow a candle and cut the 'cake'. She disapproved of the regular kind on such occasions, so we would get her a cake shaped 'meva' heap and put a single candle on it. She would look all around her when all was done and ready and then ask the others to blow the candle - she not having the strength or the wind to be able to do that on her own. When we insisted that she do it, she would shift with great difficulty in her chair and bring her face close to the flame, fill her cheeks with whatever air she could manage, do the action and one of us would blow it off from behind, making her believe that she had done it. I think she knew she had been tricked, her expression of disapproval remaining with her, even after the family had begun to sing the greetings.

My Father's Hindi equivalent for the more obvious, 'Happy Birthday to you..' ditty.

She was a strong woman. Nothing could get her down. With her children she was a lioness, protective and ready to attack any adversity that came the way of her cubs. Ever the optimist, fun loving individual, she had the capacity to change the mood of the room she would enter, instantly. In her darkest of hours, and she faced many, she never allowed it to travel to her next of kin, especially her children. She touched everyone she came in contact with. Not just those that belonged to the literary fraternity of my Father but other common people, the ones on the street, or the places she regularly visited - the temples, the sweet shop, the magazine and book store, her daily drive to the wayside coffee parlor, the 'mithaiwala', all had a special equation with her and she with them. Even today after she has gone, they call and meet and enquire of the family, not because of who we are today, but of who we were when Ma used to interact with them. They come and narrate stories of their association, stories of her caring and generous nature, of how she made them feel like one of her own family. Those that she dealt with then, are still around and still in the unaltered position. The 'mithai' comes from the same 'mithaiwala', the plumber or the electrician she had deployed in the house in Delhi are still there, as are most of the staff that worked under her. The temple priests still fill us whenever we meet them, of all her visits and the prayers that she conducted for the well being of the family. There was a radiance about her that was beyond description. We lived under that brilliance and protective cover, secure in the thought that she was there for us at every turn we took. And now as I connect with others that came under her influence, I find them expressing similar feelings. They feel 'orphaned' they say, and a mist covers their eyes as they reminisce memories of her.

She gave me strength when I had lost and fallen. Gave me hope and courage when I was covered in the dust of adversity. Every whack that she bestowed upon my face or hands were not one of anger and resentment, it was an expression of her overwhelming love and concern for me. She gave me style and dignity. She taught me grace and forgiveness. She educated me on the value of my surname. She directed her anger at me when I erred, not because I had erred, but because 'how could you have erred'. It was almost an anger that took personal responsibility of a mistake done by the other. We all know that the welcome embrace of a friend, a beloved, a senior, an elder is always filled with that special feeling, a sensation we enjoy and relish and feel comfortable with, but we also know that when we put our head by the side of the Mother, or resign our body into the gentleness of her lap, nothing in the world compared or equalled that feeling.

My Mother's Mother died at child birth, when my Mother was born. How ever did my Mother know what it was to be the best Ma in the world ? http://bigb.bigadda.com/ 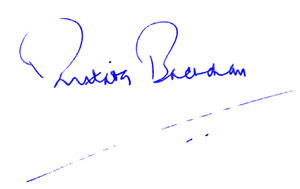 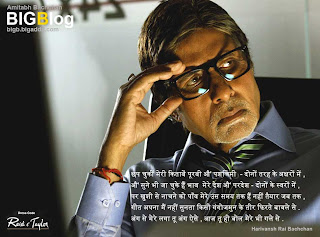 Amitabh Bachchan BigB Wallpaper
Posted by Mahendra at 8:59 AM 1 comment: