I have realized eventually that my extended family : Big B 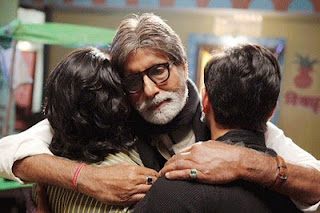 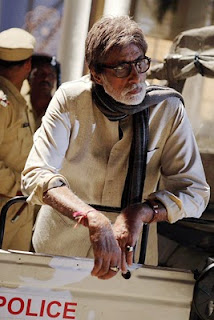 On the sets of ‘Aarakshan’ playing with Prakash Jha’s daughter’s little cross breed dog - Diva .. a mix between a spaniel and a poodle !! Such an affectionate little lady ..

….. and my daughter in the film Deepika in an emotional moment ..!!

I have labored the whole day to be able to connect with all the FmXt, but at the end of it all, some do get left behind. To them my sincere regrets and apologies, but it is a physical marathon accomplishing the task. I did promise earlier too that I would take care of all the responses on three posts and that as you all know has remained unfulfilled … pity !
Then there was the twitter brigade too, which kept pouring in at every interval .. my addressing them took care of many of the Ef that had migrated to the shorter climes of the T 301 .. my 301 st day on twitter. But nothing beats the EF here and its DAY 1053 !!
A fascinating game of the World Cup again tonight - Pakistan vs New Zealand, and an almost foregone conclusion that NZ would lose. But they won ! And what a game played by Ross Taylor. His last few overs were just unbelievable ! A man possessed almost of proving that he could bring honor and glory to his country and team !
A lazy day ! A day of no creativity ! A day without test and fear of performance ! A day of just singular commitment ! The desire to respond to as many .. to connect with those that come in the hope of some response, not just for a day or a few days but for months. That have remained loyal and trusted to the medium, in the hope that one day they shall be heard and acknowledged. And when they are - a simple greeting or an acceptance of their words - the joy and happiness that it brings to them is infectious. There are those that even though they do not get the ‘amaltas’ celebrate its gift to the others ! This is quite quite amazing. It does not matter if it did not happen to me, its the joy that it happened to the other. This selfless expression of care and feel. This genuine expression of the pleasure for someone else is rare. Life does not give too many opportunities for such behavior. It is a self centered, self absorbed world that we live in. We are not born that way, we become that. The harshness of our order coerces us to adopt and adapt to these egomaniacal, self serving, inconsiderate traits. Competition, envy, jealousy, inferiority and superiority complexes, all combine together to drive us into a well of destruction and chaos.
To find the absence of all these horrors in our own courtyard is such a commendable attribute. It makes me hold my head up in grace and pride. It gives value to our association in a manner that sets examples. Our examples desist the obvious is in itself an accomplishment. It is not how or when or why it happens. It has happened, and that to me is all that is of matter.
Each new chapter that we entered into, each fresh horizon that we visualized, all came with its share of issues and nay sayers. The important fact is that we swam through it all. Yes it was rough weather, harsh and ugly streams of high rising waves of oppression, dissent and abuse. But the mere persistence that we demonstrated, demoralized the opponent. And today we are proud to have a platform, that may not always exhibit the excellence of many others, but at least it is ours - un borrowed, unfettered and our own ! And you dear family are entirely responsible for it. In a spirit that has never wavered or faltered you have trudged this path with fortitude and grit !
We come together not for notice or acclaim. We come together because we want to come together. There is very little that any force can do to prevent ‘want’. It is when you want that you will ! You have all been valiant soldiers, that have withstood odds ; seasoned as you are now to battle, to grow, to multiply. May your fraternity grow and may it be as fulfilling to you as it is to me …
My concern, my love as ever ..
Amitabh Bachchan
Posted by Mahendra at 11:04 PM 1 comment: