Amitabh on a 1600 cc motorbike 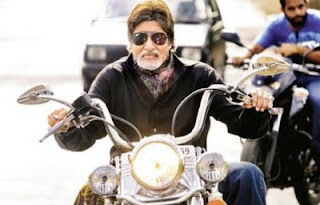 Amitabh Bachchan created a major commotion on the sets of Bbuddah when he arrived on his 1600 cc stylish motorbike.

In this slick adventure, director Puri Jagannath has shown Amitabh as an angry old man. Mouthing popular dialogues from Deewar, Agneepath, Shahenshah. Bachchan is expected to bring the house down with this film. We are eagerly waiting this one.
Posted by Mahendra at 4:31 AM No comments:

The location is causing me problems of communication BigB 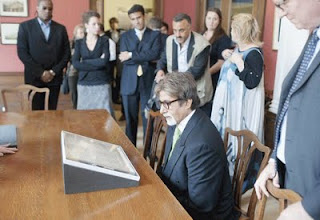 SeaSandRockDessertSnow and ekant May  20 ,  2011   Fri  7 : 52 Pm
The location is causing me problems of communication … and I am livid ! I hate to be in a situation when connectivity deprives me of my most important moment of the day - my post to my EF ..!!
I have always tried to be at a place where at least if nothing else, my network works. That has not been adhered to when I got to where I got to and this is upsetting my mind and thinking.
Anyway .. we must live with it and find a way out .. and if there is no way out, you change. So if things do not improve, I shall move ..
The first look promo of the ‘Bbuddah - hoga tera baap’ trailer was released today on the Tv during the IPL game and I have been overwhelmed with the response that has come to me on twitter and the mobile here. This is just such a joy to find all the hard work paying off. I must first thank the  director Puri Jaganath for conceiving this idea for me and pushing me to do it, with a strong persuasive effort from Ram Gopal Varma, whose assistant director Puri had been. The entire team of people that have worked on the film need a warm applause from me and my thanks for working like a fine well strung unit. They have patient and composed and most efficient. Thank you all. Now the test for the audience starts … the film releases on the 1st of July and all our fingers and toes are crossed for its hopeful appreciation among the audiences !!
London was most rewarding and had its share of excitement and varied experiences. With the innovation and inauguration of the Bachchan Bol Vog in the UK and meeting all those that have developed and seen it function to perfection, I was exposed to an entire media entourage in their most generous and polite respectful manner. It was wonderful to see them all after a long time and to find them still interested in what I do and say.
Oxford in the middle of all this was such a rewarding visit. Would you not agree after this -
And that ladies and gentleman of the EF … is the Magna Carta ! The original, preserved and archived in the Bodlein Library at one of the many ornate and grand halls of the Oxford University. Been shown to me in a rare gesture of exclusivity, this is such an honor. A document that became the corner stone of the practice of law, of democracy and in many ways the formation and reference for the construction of several major Constitutions of country’s. Awesome !!
Along with this there were so many other such experiences that it would take me a while to not just describe them but, to understand and explain their importance in today’s world. You feel so dwarfed in the presence of such magnificent greatness, such vast knowledge that if circumstances permitted I would want to get back to University again. And as I say this I remember an incident that transpired between my parents and the first Vice President of the country, that great mind Dr Sarvapalli Radhakrishnan. In one of his private meetings with my Father and my Mother he had told her ” sell all your jewelry, but send your boys to Oxford or Cambridge ” !
And as I spent time with the many intellectuals at the University there was talk among them of the need and importance of preservation - even preservation in our own film Industry - of our films and scripts and songs and dialogues and procedures that went through in their making. How humbling to think that intellectuals out of another country, people of great eminence in the field of international education and knowledge, would even consider thinking or suggesting such procedures to us, when really it should be coming to us independently and within ourselves. Would there be any takers, any initiatives ?? I wonder and lament too !!
The winds turn cold .. the evening dark … and the silence haunting and daunting almost at once .. it comes to the stage when I must bear the unhappy thought of closing my conversation with you ..
The blue waters of the sea, the distinct outlines of the scattered islands below, lived in, housed and formed along the edges of vast fields of agricultural enterprise, the gentle white impressions of the surf among the waves that clash with their own counterparts, a few sparse clouds, a drone .. and ekant !!
Love to all ..

Amitabh Bachchan
BigB Blog
Posted by Mahendra at 2:27 AM No comments:

Bbuddah Hoga Terra Baap Teaser 1
Posted by Mahendra at 1:17 AM No comments:

Posted by Mahendra at 1:15 AM No comments: