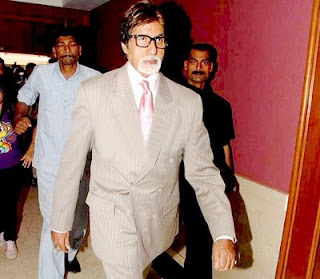 My caste is Indian, declares Amitabh

Mumbai, May 12 (IANS) While the debate over caste census intensifies with most parties rooting for it, Bollywood star Amitabh Bachchan is clear where he stands on the controversial issue. If ever asked to mention his caste, he says categorically, he would be ready with the answer -- Indian.

Census enumerators came calling on the Bachchan household, prompting Amitabh to express his views on the issue of caste census.

"Wary of the sensitivity that this has raised recently by politicians, they keep away from it. They reason that they would wait for some government decision on this. I tell them irrespective of what the system decides, my answer is ready - caste, Indian," he wrote on his blog bigb.bigadda.com.

Big B says that his father, Harivansh Rai Bachchan, a noted Hindi poet and litterateur, never believed in caste system.

"My Father never believed in caste and neither do any of us. He married a Sikh (Teji Bachchan), I married a Bengali (Jaya Bhaduri), my brother a Sindhi (Ramola), my daughter (Shweta) a Punjabi (Nikhil Nanda), my son (Abhishek) a Mangalorean (Aishwarya Rai)... in his autobiography he (Harivansh Rai) had expressed that future generations of his family should marry into different parts of the country. So far that tradition has been kept alive!!"

Prime Minister Manmohan Singh has said the government will soon take a decision on caste-based census in the country.

Amitabh recounts the morning the enumerators came to his house.

"From the morning a consensus on the census. Officials from the BMC, the Bombay Municipal Corporation, troop into Prateeksha to detail in on information that shall for the first time in India develop for every citizen the UID - a Unique Identity Card.

"All kinds of information is sought name, place, age, dependents, place of birth, house, residence years and on. I wait for them to come to the crucial controversial one - caste. They don't."

Posted by Mahendra at 6:50 AM No comments: