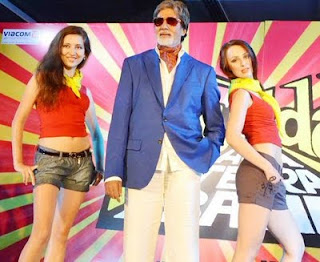 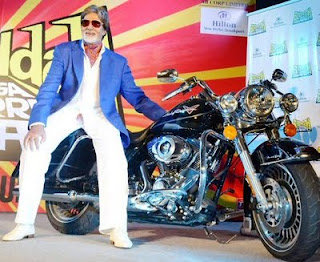 Bollywood superstar Amitabh Bachchan on the permotional event for his upcoming film " Buddha Hoga Terra Baap" in New Delhi
Posted by Mahendra at 5:27 AM No comments: 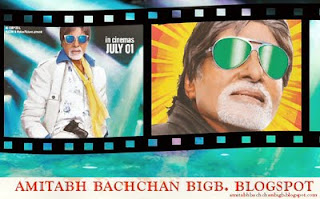 Amitabh Bachchan on being a Bbuddah jo ban gaya grand-baap...

Ironically while you prepare to become a Dadajee, you are playing a 60-year old cool-dude in your new film Bbuddah... Hoga Terra Baap. A bit of a dichotomy there?

Let the dichotomy exist in the minds of those that consider it to be one. For me it is wonderful that I can enact a role at this stage which you call a cool dude, whatever that means! The challenges as an actor shall always provide opportunities that may not necessarily be viewed as realistic. The private persona of an artist does not always jell with his or her role on film. Do artists that play negative roles, get viewed as being villains in their homes as well? Actors on film, stage, TV and other modes of creativity would all be living in a dichotomy then!!

How cool does it feel when youngsters call you the youngest (at heart) grandpa in the entertainment industry?
No one has called me that yet. But were they to, I would consider it favourably.

You are an intrinsically sober soul. How difficult was it playing the flamboyant and loud character in Bbuddah?
I would question your opinion or your charge of me being intrinsically a sober soul. And I would wish to know too how and why you reached such a conclusion. 'Intrinsically' would denote that you have had access to my insides. That is questionable! But that apart, I would play a flamboyant and loud character in Bbuddah with equal sincerity as I would play a sober intense individual in an Anand, a Deewar or an Agneepath!

There are three generations of heroines vying for your attention in Bbuddah… Hoga Terra Baap. How does that make you feel?
Wanted!!

2011-12 are again, decisive years for you. Besides becoming a Dadajee, this period will see you play a variety of roles in films that range from the loud (Bbuddah) to the grim (Aarakshan) to the action-packed (Department). How would you define this period?

Versatility is what most artists hope to be attached to during their years of creative work. If in these years of my career I am getting the opportunity to portray different kinds of genre, then I am happy.

Tom Hanks recently said he'd love to do a film with you?
He has probably Googled the wrong person..!!

Posted by Mahendra at 3:34 AM No comments:

Sleep deprived at 6 am in the morning, trudging off to the airport at that hour Big B

Sopaan , New Delhi   June 26/27 ,  2011       Sun/Mon  12:47 AM
Sleep deprived at 6 am in the morning, trudging off to the airport at that hour, heavy on head, light on the traffic and muggy in the terminal, there is but just one occupation after the seat belt sign is turned on, the safety instructions played and the taxi off begins - Slumberrrr  !!! The weather is rain cloud ridden, grey and turbulent, the captain of the flight sends in a note graciously through the air hostess welcoming me on board and wishing me luck for #BHTBaap ! That does not happen too often ! Half read news papers, spectacles mid way between the hands and legs, neck cricked in an uncomfortable position, one does not allow the distractions to overcome you … you sleep  …
Until you hit some heavy rain clouds again and watch the window gaining stripes of water from the outside, as we descend down on a cool somewhat wet Delhi airport. And on landing its straight onto the media at the Hilton Hoptel in west Delhi. Delhi of my College and School days has gone through a metamorphosis - wide lane roads, miles of fly overs, and not a inkling of where it is I travel. And this from one that lived and spent almost 15 years of my life in this great city.
The media jamboree is relentless. One after the other in different rooms, on different floors, in restaurants, in side alleys … in short everywhere. But the press is kind and generous. After a huge volley of questions ranging from .. well … all walks of the industry to the film and my personal take on it, I find myself on the highways again, riding for miles with not an inkling of where we are. This city has become another city. I cannot relate to it, cannot recognize it, or worse, cannot understand its renewed dimensions ..
Its time to catch up on friends from the time we were in University together. Dear friends who were more than just that. They became family. Felt as family reacted as family and gave affection as family. We may not have had the frequency of contact, but the frequency of our wave lengths remained unchanged. Those carefree days of University, when attending classes was an event - we were never in them ! Out on the streets of the busy commercial locations in coffee shops, on discreet drives in borrowed cars and Lambrettas, at locations wild and hidden, on picnics and music … those were the days, and those were the days spent with friends who I meet tonight for dinner. Nostalgia abounds - old stories, fun, naughty, emotional … they are never ending those moments and reliving them can never tire one … each and every incident so vivid in our memory, like it had happened only just yesterday ..
How we long for those days to return … but return they never shall … !!
The buzz on the film now reaches pinacle strength and it would be impossible to fathom the level of expectation on the film per se. One can merely wait, as my friend described it, for the ‘dabba’ to open. The ‘dabba’ … box … box office !!! The final test which takes care of all tests and trials, which gives verdict, appreciation, rejection all at once …
And we learn that this is the test that we shall have to respect. Here endeth the lesson ! The finale !
I love to express my feelings … and they remain as ever … warm affectionate and filled with love … only love ….
And now to lean across and put off the lights … i am already in bed !!!
Amitabh Bachchan
Posted by Mahendra at 2:17 AM 1 comment:

I am begging to be excused tonight BigB

Jalsa , Mumbai   June  25/26 , 2011      Sat/ Sun  1 : 35 AM
I am begging to be excused tonight. I am due to be up in another 3 hours and there is a very busy schedule as I land in Delhi … one media after another. So if there is time to be saved it will have to be here at our connect. I have just finished for the day and knowing the anxiety that prevails among all of you, I thought it best to put in an appearance before signing off …
The Economic Times wrote a beautiful article on me this morning and I had wanted to share it with all the EF .. but time has restricted me. I am planning to carry it along with me to Delhi and if I can get the time there would love to put in more value to this writing by introducing you to the article. An example of what the best in journalism can be. I thanked the two senior journalists that came by for the interview and received back compliments of equal measure. There are some very intelligent and mature minds in the fraternity of journalism and I think that I encountered two of them for this interview.
The media I must say has been most generous for this film of mine and has been most encouraging and supportive. Thank you members of the fourth estate. Recently too I have been observing some of the debates that have been on air on Tv, and there too the opinion and analysis of some of the fraternity has been most educative.
BHTBaap is of course a light film, without any preaching or motive of bringing it on celluloid, but the next Aarakshan shall certainly attract debate and discussion, because of its sensitive nature. At times it is good to merely drift along without motive or angle. Allow matters to happen rather than make effort to make them happen. Both succeed at times, but I am more comfortable with the former. Sometimes our own belief is not strong enough to do the latter. Sometimes your conviction fails you, determination weakens and so rather than achieve, you fall into the abyss of incompetence. That is never required or necessary.
But more of that some other day .. let me be tonight .. though there is immense guilt in leaving you without completing my thoughts …
Love
Amitabh Bachchan
Posted by Mahendra at 2:16 AM No comments: