Big B is only ambassador of tourism not state Gujarat 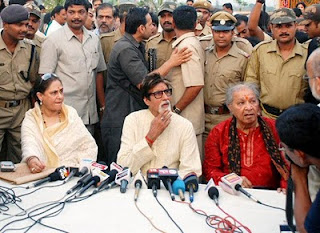 Big B is only ambassador of tourism, not state Gujarat

The Gujarat government on Monday termed as unfortunate Kerala's decision to withdraw its proposal to make Amitabh Bachchan its brand ambassador to promote tourism after extending an invitation.

"The CPM government's decision is unfortunate... There is some misunderstanding. Bachchan is not the brand ambassador of Gujarat but that of tourism," visiting Gujarat Tourism and Health Minister Jay Narayan Vyas told reporters here. "Amitabh Bachchan is a star who has very few parallels in India. Bachchan and Sachin Tendulkar have achieved acclaim and success through hard work and talent. They are national talents and we should respect them."

Asked if Bachchan would participate in Gujarat's golden jubilee celebrations to be held on May 1, he said, "Bachchan being our brand ambassador does not need an invitation to come to Gujarat. When he endorses a brand, he verifies it thoroughly. If he has agreed to promote Gujarat tourism, it is due to its merits."

On Modi making an appearance before the Supreme Court-appointed SIT, Vyas said it was due to "media compulsions".

"No country or state can ever prosper if congenial atmosphere does not exist," he said.