Amitabh Bachchan to start a campaign on hepatitis B awareness 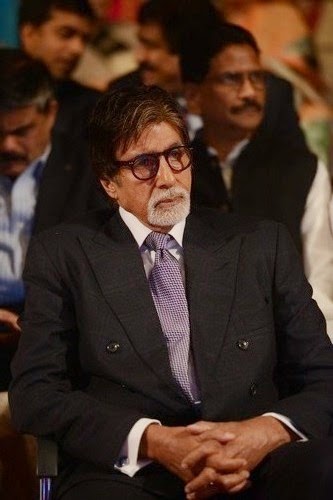 Amitabh Bachchan to start a campaign on hepatitis B awareness


Superstar Amitabh Bachchan was recently named as the ambassador for the MCGM’s (Municipal Campaign of Greater Mumbai) TB awareness campaign. Expressing his happiness at having headed the movement to eradicate polio in the country, Amitabh Bachchan tweeted his gratitude at having been chosen for the movement to beat TB in Mumbai. Being a survivor of TB himself, the star shared his experience and told others about how he was lucky to have timely and good treatment for TB.

Now, the star wants to start a campaign against hepatitis B. According to a tweet he recently posted on his Twitter account, Amitabh Bachchan said that he was eager to spearhead the campaign against the deadly disease and had already met a few doctors from the committee. He also added that the doctors and he will ‘strategize, detect and cure’ as soon as possible.

Megastar Amitabh Bachchan is planning to start a new campaign for infectious disease caused by the hepatitis B virus (HBV).

The 72-year-old actor, who is also a UNICEF Global Ambassador for polio eradication, met doctors recently to strategies the plan.


T 1720 - Wish to start a campaign on awareness of HepatitisB .. met some committed doctors and shall strategise .. detect and cured asap ! 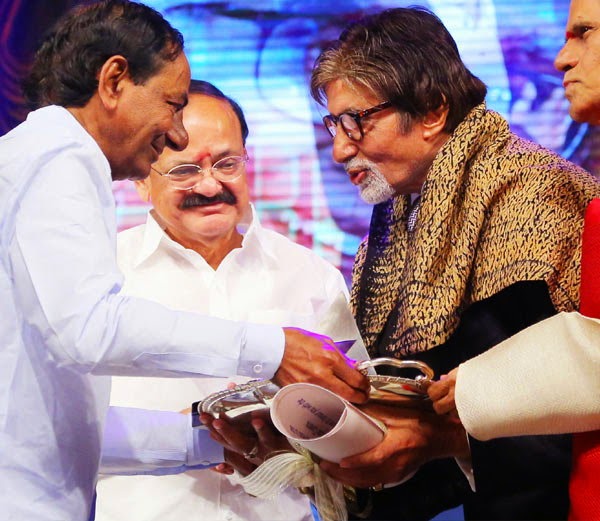 Bollywood megastar Amitabh Bachchan was honoured with ANR Award at a glittering ceremony held at the Annapurna Studios in Hyderabad on 27 December. The Akkineni International Foundation presented the prestigious award to the BigB for his decades of contribution to Indian cinema.
Akkineni Nageswara Rao (ANR)'s son Akkineni Nagarjuna thanked Amitabh Bachchan for accepting the award. "It is a moment of great pride for entire Akkineni family. By accepting the award Amitji has given the Award its fullest recognition and made it even more precious. Amitji graciousness has brought tremendous motivational significance, both symbolic and high degree of prestige for ANR Award," said the actor. 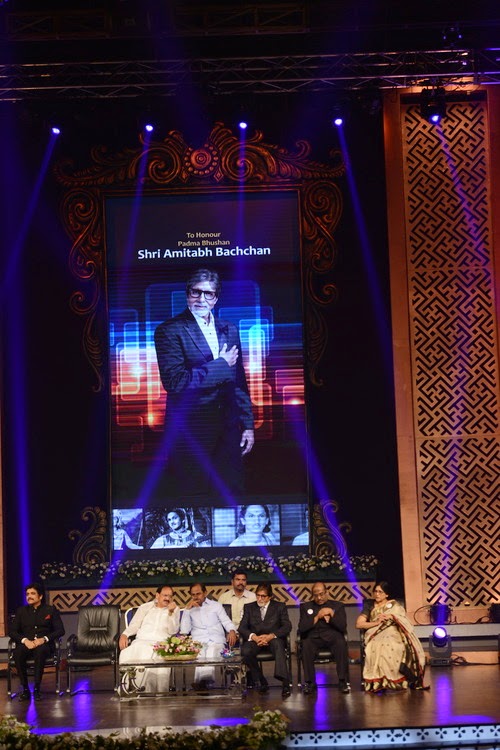 "With remarkable talent, a meticulous work ethics and a tremendous ability to reinvent himself, Amitabh Bachchan continue(s) to enthrall us with his unforgettable impression in world cinema and in the hearts of millions of fans including ANR," Nagarjuna added.
In his speech, Amitabh Bachchan spoke about ANR's immense contribution to the society. "It is privileged to be part of this industry. It is stalwart like ANR who has given the film industry dignity, respectability and grace. The industry survives because of people like him. He is an iconic figure. I'm humbled to receive this ANR national award. I would like to add his family is his true successors," Bachchan said.

Actress-cum-dancer Sobhana presented "Dancing Drums," a specially-choreographed dance, which was followed by a performance of 50 children dancing to a song from "Manam" at the award function. Also, 19 students who are passing out of the Annapurna International School of Film and Media received their degrees from Amitabh Bachchan. 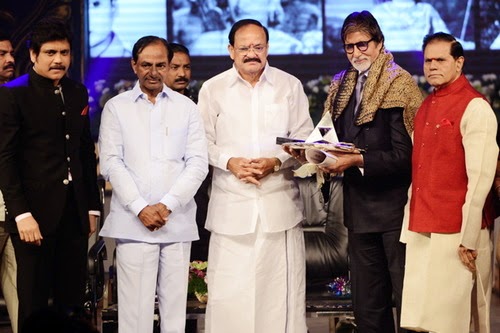 Chief Minister of Telangana K Chandrasekhar Rao and Parliamentary Affairs Minister M Venkaiah Naidu, Rajya Sabha Member and industrialist T. Subbarami Reddy, besides many distinguished guests from the industry attended the award ceremony. Along with the entire Akkineni family, numerous fans of the legendary ANR were also present on the occasion. 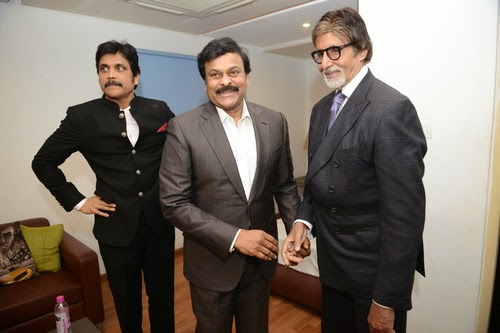 The Akkineni International Foundation was founded by Akkineni Nageswara Rao to provide aid to the differently-abled and funds for education of needy students.

Named after Dr Akkineni Nageshwara Rao, the ANR award honours artistes who made distinguished contribution to the growth and promotion of film medium and carries prize money of ₹5 lakh.

news by ibtimes
Posted by Mahendra at 1:40 AM No comments: