Big B to shoot in Gandhi birthplace Sabarmati Ashram in Ahmedabad

Big B to shoot in Gandhi birthplace Sabarmati Ashram in Ahmedabad

Another day of enlightenment ! The early hours of the morning and no better place than the ashram at Sabarmati, the abode of the Mahatma, the white doves of peace, the ‘charkha’ and the serenity of divine presence even in his absence.

Behind me HridayaKunj - abode of the heart. Hridaya, heart. Kunj a place a home, a resting place a house. HridayaKunj was named by one of the Mahatma’s associates after spending time with him at the ashram. The simplicity of his house. Just a verandah in front where he devoted his time to thought and spinning the charkha. On the left his private meeting room, small and barely able to house more than three to four people. To the right of the verandah his kitchen and behind, a private room and small courtyard for Kasturba his wife. Thats it. No glass windows, no locks and gates, just the most unobtrusive residence. To the left of the picture is the small cottage where Vinoba Bhave lived, another dedicated follower of Gandhi ji. It was also occupied by Mira, so named after Gandhi ji compared her dedication to that of Meera of Krishna. Mira was a British lady who after reading about Gandhi ji left England to come and be by his side and partake in his beliefs and teachings. Further at the back another cottage where all the bigger and important dignitaries stayed when they visited Gandhi ji - Nehru, Rajendra Prasad and others … 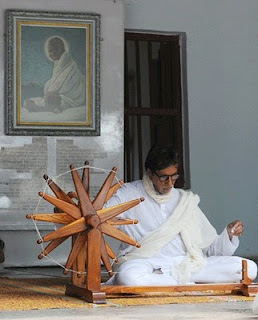 Below and under my feet the raw mud and earth, swept clean for the day. the feel of that mud of that earth took me back to my own place of birth, Allahabad where most of the open spaces in our house would look and feel this way. We do not see this much in our cities these days. Cemented and pebbled by today’s modern standards, the ground has lost its feel of mother earth. When your bare feet touch the soil, there is a certain nakedness about the moment, a certain oneness with nature. Wearing the shoe may demonstrate the progress or the social change within the country, but there is and shall always be that raw feel when barefooted, which can never be replaced. And it does seem strange but even after my work finished for the day, I somehow chose to remain bare feet even while traveling to and from the Hotel. There was a certain purity about it.
As they prepared for the next shot a little girl was brought up to me. Tender and frail, she suffered from Thalassemia Major, a blood disease where the only cure is continued blood transfusions. Being a Thalassemia Minor myself, I have been supporting many institutions in Mumbai and in several other locations within and outside the country, where dedicated volunteers work devotedly towards looking after those afflicted. It is so distressing to see little kids suffer. It breaks ones heart, but when you find yourself in their presence, you put up a brave face and tell them that all will be well soon. This little one loved ‘Bhootnath’ and ‘Baghbaan’ and a smile filled up her face when she talked of these films ~ 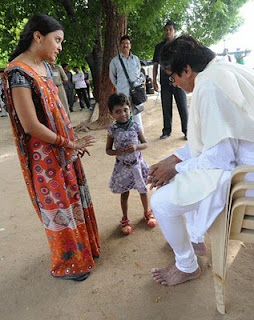 The lush ‘neem’ trees are such a healthy presence at the ashram. it is considered to be extremely healthy to sit under them. The leaves as many know of the ‘neem’ are a great blood purifier. As youngsters we were often asked to eat raw the fresh and new neem leaves. They tasted the bitterest ever, but because of its medicinal quality we learnt to consume it. The branch or stem of the neem is used even now to brush your teeth with in many parts of rural India. They are the best for the upkeep of healthy teeth, and those that use them continuously never need to get to a dentist. The branches of the neem filled with its leaves is also used as a disinfectant during the cleansing of homes that have had someone in the house infected with chicken pox or measles. The branches of the tree are burnt inside the house and the smoke cleansing the air of any infection. Old tried and tested grand mother technologies, that never failed.

The tree itself is one that takes ages to grow, but has, in the parts where the heat of summer prevails harshly, been able to provide the much needed shade, apart from its other qualities.

Ironic that this little girl should be meeting me under the shades of the neem, a tree whose leaves are eaten to purify blood !

The West, and particularly the Americans had at one point taken over the patent of this plant, until someone fought back and recovered it from them. Hmmm ..!!

But the day ended in another spectacular and amazing moment - a visit to the Akshardham Temple in Gandhi Nagar, the capital of Gujarat and just a 20 min car ride away from the city of Ahmedabad. The Akshardham Temples in many parts of the country have been amazing architectural achievements and the one here in Gandhi Nagar was no less. The constructions and designs are indigenous and without the use of any steel. They are neat clean and aesthetically kept regions. There is a pious feel to the area as a result of this, and a very dedicated loyal and hard working volunteer group of people maintain and propagate its beliefs and principles.

In a large amphi theater that seated 2500 people in a picturesque open space, we witnessed a dramatic and utterly delightful show of a symbolic story that depicted the philosophy of the Akshardham Temple. The laser imagery on flowing fountains and building images on them with a story tale between Nachiket the son of a Saintly father that banishes him to YamRaj the disciple of Death, was a delight to watch. The deeper meanings of Atma and Parmatma were exquisitely woven into the happenings unfolding before us on varied screens of water, with such beauty, that I felt so proud to have been invited to such an event by my dear friend and family like Jigi bhai, JJ Bhatt.

Such a fulfilling experience and then to be able to speak on phone to Pramukh Swami ji, whom I have met on a few occasions, to seek his blessings, was an ideal end to the most, how should I put it, ethereal hours in a day. 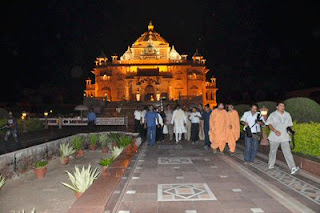 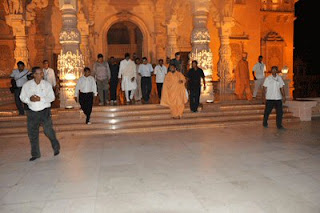 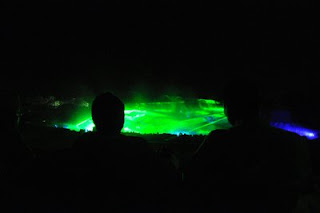 Tomorrow early again to another historic location here and then to Jamnagar and on to Porbandar, the birth place of the Mahatma …

Posted by Mahendra at 5:19 AM No comments: