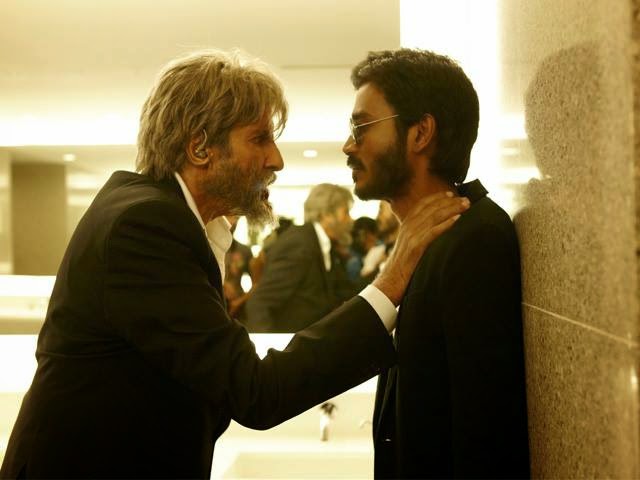 
An unusual plot premise is coupled with a writer-director’s self-confessed Big B-fixation in Shamitabh.

Dollops of stylistic flourishes and narrative sleights are added to the mix and stirred with utmost vigour. The result of the exercise is too uneven to be consistently enjoyable.

Parts of the engaging, if over-indulgent drama,are an ode to the romance of Hindi cinema.
Shamitabh thrives on the infectious energy that the two lead actors – Amitabh Bachchan and Dhanush – generate when they are set off against each other, which is almost always in this 153-minute film.

The two stars are in fine fettle, especially in the first half. But once the novelty of the gravelly voice meets starry-eyed village lad construct wears off, the film assumes the likeness of an oversized ship driven by a fist-sized engine.

Inevitably, Shamitabh, despite scaling some high points, tilts over and runs aground before it can make it to the shore.

Seasoned adman R Balki’s third directorial feature is in many ways like his first two: Cheeni Kum and Paa.

The film ventures into uncharted terrain, conjures up passages that are genuinely startling and gives the three key members of the cast free rein to express themselves, but eventually, as it nears its business end, succumbs to the lure of average Bollywood melodrama.

The bright flashes are, however, eventually lost in a miasma of excesses that leave avoidable pockmarks on the otherwise imposing edifice.

It is the unique story that lends Shamitabh much of its weight until it loses its way somewhat in pursuit of the brazenly implausible.

A geriatric wreck who has nothing to lose and an Igatpuri youngster who has everything to gain if the two men can sink their temperamental differences and fill in for what the other lacks.

All through the history of cinema, such odd pairs have yielded great chemistry on the big screen, but only when the balance between the pivotal figures has attained perfection. Shamitabh does not quite make that grade.

An aged, mealy-mouthed, self-destructive alcoholic Amitabh Sinha (Bachchan) is a spent force, having been thwarted four decades ago in a bid to make it as a movie actor.
His rich baritone is the man’s only belonging that counts for anything and he still revels in mouthing lines from Mughal-e-Azam.

A young wannabe actor Danish (Dhanush) is the exact opposite. He is full of passion and ambition and wants to see his name up on the movie billboards.

But he, too, suffers from an impediment.He does not have a voice – his vocal chord is paralysed. But his dreams are unstoppable.

An enterprising and sympathetic assistant director Akshara (Akshara Haasan) gets the two men to collaborate. Danish gets a voice processor, and Amitabh gives words to his thoughts. As the Voice and the Face combine, a star is born.

So far so good. Beyond this point, Shamitabh resembles a stretched sham of a story, too laboured for its own good. 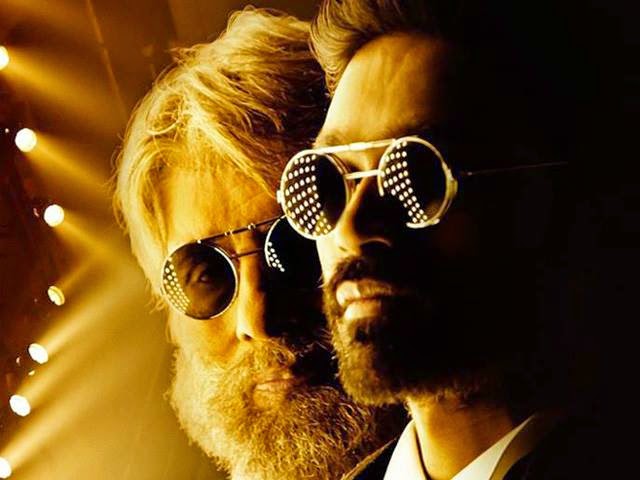 The film spends much time critiquing the ways of Bollywood, but ends up repeating many of the very follies it takes a dig at.

It throws in a musical number that goes Piddly and potters around props borrowed from lavatories. The stink it raises is inoffensive and evaporates all too soon.

Shamitabh is watchable on account of the great performances. Amitabh takes the gruff, irritable dead-end disaster of a man literally to the graveyard level.

His character lives in a Mumbai cemetery, a place from where he draws his macabre standoffish shell.

Dhanush matches the veteran move for move with an endearing level of effortlessness.
Akshara Haasan, in her debut, holds her own with an air of confidence that bodes well for the future.

Shamitabh is recommended only for its storyline, the quality of the performances and its technical brilliance.

While Bachchan is indeed the selling point of the film, Shamitabh might have benefitted had Balki gone a little easier on his obsession with the ageless superstar.


NDTV
Posted by Mahendra at 3:29 AM No comments: 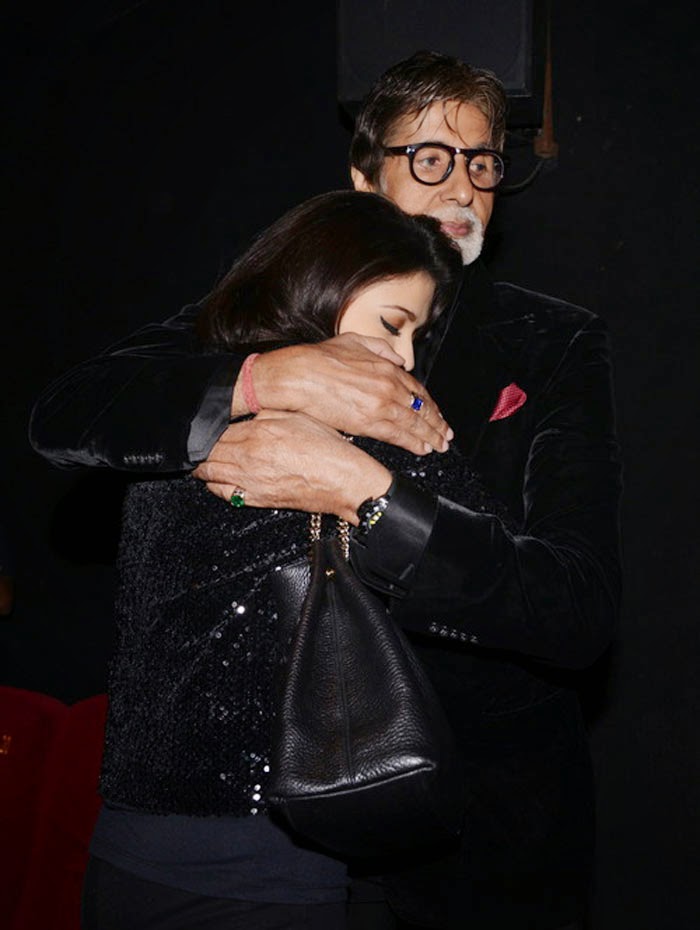 Amitabh, 72, who shared pictures on the blog from last night’s screening of his latest release, said his mind remained “stagnant and alone” despite the praise and compliments.

“The show is over… The apprehensions remain… The praise and the compliments abound… But the mind remains stagnant and alone… The appreciation of the daughter-in-law after the film is over..,” Bachchan wrote on his blog. 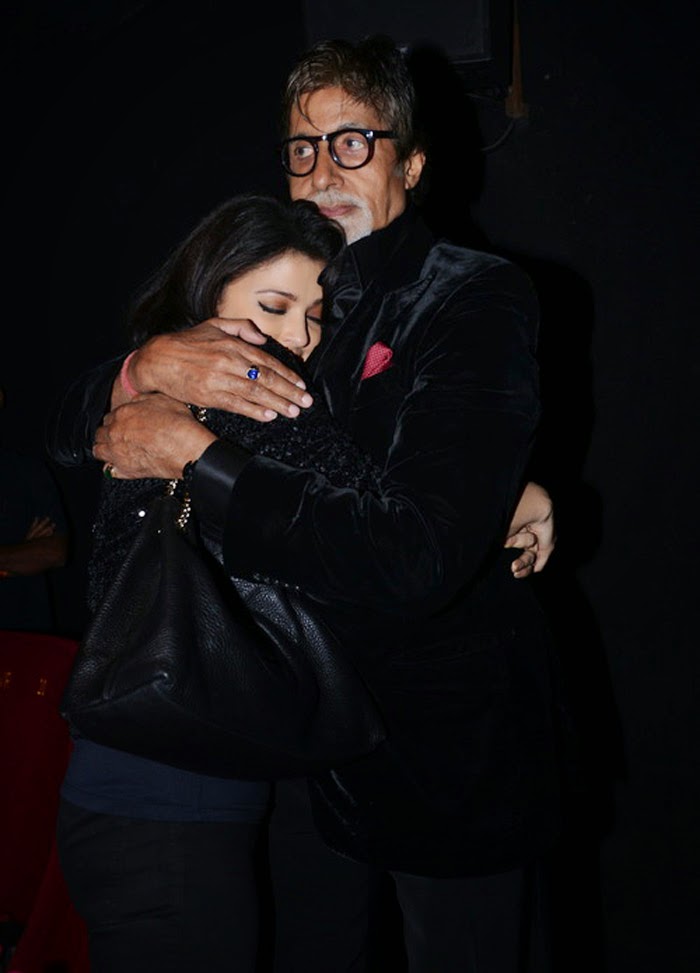 The screening was attended by his son Abhishek, Shamitabh’s actress Akshara Haasan, media persons besides Aishwarya.
Posted by Mahendra at 3:20 AM No comments: