Another day in the life of your blog … another day in the life of my life … another recognition, another event, another magazine, another grateful thanks, another year in my 42 years in this profession, over !
Took in a chartered jet from Bhopal, met up with the house, paid respects to the departed Mother of a friend at her ‘chautha’ in town, came in to the Sunday meet with the crowds, on to the Awards at BandraKurlaComplex, pride of the Industry tribute and trophy by Madhuri Dixit, interviews back stage, on stage again to pick up Aishwarya’s best actress award for ‘Guzarish’, on to meet Jaya at a common friend for dinner to meet organizers of the Stuttgart Film Fest, home now for a few hours before catching the charter jet back to Bhopal and on to set from the airport and ‘Aarakshan’ …
Pride of the Industry ! They did a showreel of my journey from Saat Hindustani to Paa and I wondered how on earth did I ever go through all this. It just seems like yesterday ! No single person can be the recipient of the pride for an entire industry, when hundreds have through years and years of blood sweat and tears, contributed so much more than I have. There is pride in my mind for the Industry, I cannot possibly be the Pride.
Humbling and embarrassing all the same ! A member from my Twitter family remarked ‘they are indicating to you by these repeated awards, to stop now, but don’t’ ! Ha ha !
Would I really need to stop. I guess my work, and my body would need to tell or indicate that to me. When it does, I shall. But till then may there be strength to continue. There is no fear within me to stop and bear the consequences. My fear would be whether my EF would still remain. Would they, deprived now of any activity my end, feel reluctant to communicate, disappear, or just shut shop. I do hope I never have to face such consequences. But to think rationally, what is it that would be wrong. It should be in the spirit of matters ; artist no longer making films, what do we need to connect with him for. Life ! And one will have to accept it in the way it comes at you.
I would dwell on this for more, but I would deprive myself of the 3-4 hours of sleep that is due to me now. We could keep this for tomorrow though, or another day. But for now … good night !
I shall clutch the trophy, dress it down with my hands, put it up with its other mates up at the office wall where others reside and shut my eyes to a short number of winks !
My love as ever ..
Amitabh Bachchan
Source:  Big B Blog
Posted by Mahendra at 7:35 AM 1 comment:

Amitabh Bachchan
Posted by Mahendra at 7:30 AM No comments: 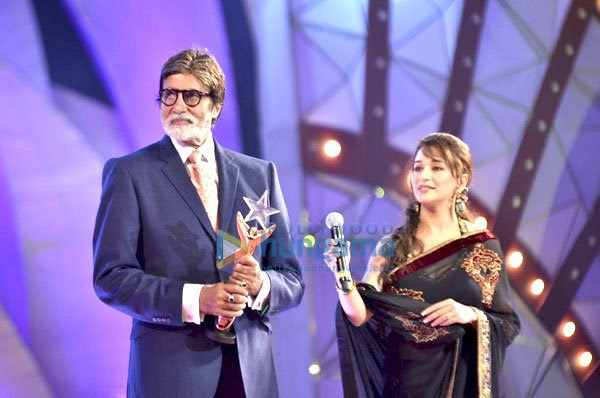 Amitabh Bachchan, Madhuri Dixit
Posted by Mahendra at 6:13 AM No comments: