Jalsa, Mumbai    Apr  3,  2011      Sun 10 : 29 PM
What a day ! Yesterday !! What a moment ! The spirits and the excitement and the out pouring of emotion and love and ecstasy ! 11 men in blue wearing the National colors, chasing a white round object and whacking it around a boundaried periphery brought an entire nation to a stop !
Yesterday, that age old superstitious finicky belief, that if I were to watch a game it would result disfavor ably for us, broken and shattered for good I would imagine. Yes, I did not see the Indo-Pak, I did not see the Indo-Aus, and for most of the time resisted this final too. But I have no idea what prompted me to switch the game on after we were 33 for 2 and tottering. And when Dhoni smacked that six for victory, it smacked my superstition too out of my life !!
I guess some memories of the past tend to haunt you throughout your life. I was in England at the Lords Cricket ground for a test series between India and England around the late 70’s or early 80’s and personally witnessed a humiliating defeat. The English team bowled us all out for a measly 48 runs ! This was a Test series. Driving out of the grounds I can never forget the bus full of British fans ahead of us, mostly school kids, taunting us with the vilest of abuses and gestures. That visual has remained with me in all its embarrassment. I would never like to see our team in such a condition again. No one would, from any country, that has a passion for the game and its nation. Each country that lost those crucial games - England, Australia, Pakistan, Sri Lanka - at the World Cup 2011 will feel terrible. I am an Indian and felt the same at our loss. It is a game yes ! But its also national pride. And when that gets hurt, it is beyond repair. There is that something that connects you deeper than any other feeling.
I was in the Hockey Stadium at the Asian Games of 1982 in Delhi when Pakistan gave us a thrashing, 7-1 defeat ! I did not know where to look after the game was over. I was in the Stadium when India beat Brazil in a Davis Cup tie in Kolkata during the late 60’s, that great game played by our hero Ramanathan Krishnan and know what it feels like to be a part of a nation that wins and becomes victorious. I was in Dubai during the World Cup Football some years ago while shooting for ‘Boom’ and in a coffee bar filled with British fans, watching the game between Brazil and England. And when Brazil won, saw the ladies of England break down and cry uncontrollably. A similar embarrassment prevailed when I was at the Los Angeles Olympics in 1982, watching the hockey game between India and a rival team, which we lost. The shock and embarrassment becoming even more pronounced due to some other unmentionable factors too.
And so yes … when that last six was sent into the stands by Dhoni against SriLanka at the final yesterday for World Cup victory, I was out on the streets ! Abhishek Aishwarya and I got into the car, opened up the sun roof, climbed up on the roof, did some precarious driving and waving the Indian tricolor, joined the screaming and the joy of the millions that were out there along with us. I have never seen anything like this before. I had never done anything like this before. Well …. may be at another Tennis Davis Cup venture when India played USA in Delhi at the National Stadium courts, the courts where I was a member of the RajKumari Amrit Kaur Coaching Scheme, yes I trained at the national level for some time in Tennis before joining college, when I was in the University and a whole bunch of us had smuggled our way through to the stands - we never had the money to buy tickets - and shouted and screamed ourselves hoarse when we beat them !
It was such a great release almost, of all pent up emotions. Not just for me but for all those that were on every possible mode of transport, driving aimlessly and screaming, flag held high. No one said anything on the roads. There were no words being exchanged. It was just a roar of emotion and that one sound …. INDIA !!!
I cannot imagine another moment in my living memory when we saw the country in such spirits. Perhaps the Independence of the country ! But then that was a different matter !
This moment and this day shall remain etched forever in our thoughts !
Defeats and victories have been an integral part of the psyche of mankind from the day the universe was created. The desire to compete, to win over the other, to prove who is the stronger, the faster, the higher, the more accomplished has been a human phenomena, a phenomena that was installed within us by the maker, or for those that do not believe in makers, by nature ! Most of mankind’s issues have been governed by the tenets of this psyche.
Difference ….
That is the root. I am different from you. I speak differently, look different, have different belief, live in different circumstances, have different ideas and thoughts …. difference !!
All our lives we live with this stigma. And spend all our lives in trying to defeat it. And how wonderful then, when we find ourselves on a platform that signifies and exemplifies that one true spirit, that we are family and are one. Extended albeit, yet family, and one …
Love and with the blessings of all  ~

Amitabh Bachchan
Posted by Mahendra at 7:42 AM No comments: 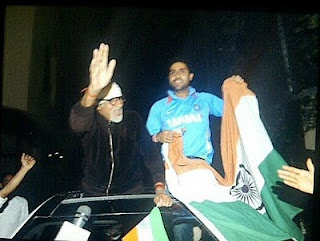 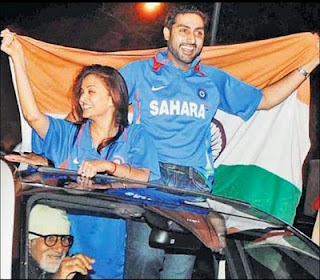 Sonu Sood refuses to get physical with Big B in Bbuddah Hoga Terra Baap
By Subhash K. Jha, April 2, 2011

A somewhat sticky situation on the sets of Poori Jagannath's Bbuddah on Tuesday, nearly blew up into a full-fledged crisis.

Sonu Sood who was shooting with the mighty Bachchan for the first time in his career was told to do a sequence where he had to get rough with the Legend. Nervous and anxious to begin with, Sood simply froze at the thought of acting so belligerent with the Big B and that too on the second day of his shooting with him.

Says an eyewitness, "Sonu simply went cold. Every actor who faces the camera with Mr. Bachchan for the first time, goes through some amount of nervousness. But when Sonu was told he had to rough up Mr. Bachchan he was panic-stricken. He tried to convince director Poori Jagannath to postpone the sequence, arguing - and not wrongly - that he would be able to handle the aggression against someone so senior and legendary after shooting with him for a while. But Puri wouldn't listen."

The final straw was the moment when Sonu was supposed to push the Big B to the ground. Known to be a thorough professional Sonu simply refused to do the needful. Says the source, "Sonu had to say some very rude things to Mr. Bachchan on camera. He managed somehow cringing and apologizing after every shot. But when he was told to physically push Mr. Bachchan, Sonu staged a walk out. 'Sorry Sir, yeh mujhse nahin hoga,' he said."

Apparently, the Big B kept persuading Sood to go ahead and give the aggression his best shot.

Says the source, "Mr Bachchan kept urging Sonu to get on with the violent shot. 'Come on, push me, do it!' Mr Bachchan tried to galvanize the nervous young actor into action. But Sonu wouldn't budge. His hands and feet had frozen. He just couldn't get aggressive with an actor he reveres."

Sonu doesn't deny there was problem. "It's true I just froze when I was told I had to get aggressive with Bachchan Saab and even push him down. Come on! This was a man I hero-worshipped from childhood. I waited ten years to share screen space with him. Now when it is finally happening, I was told I had to be extremely rude and violent with him in our very first scene together."

Sonu pleaded with director Poori Jagannath to postpone the sequence for later. "I wanted to lose my inhibitions get comfortable with the God of acting. But I was told I had to go through it...It was doubly painful since I share a very special bonding with the Bachchans. I starred with Abhishek and Aishwarya in their most special films Yuva and Jodhaa Akbar. Now it's Bachchan Saab. I didn't want to start on that rude note."

Big B told Sonu Sood to relax and just get on with it. But for once the young actor refused to take orders from the director.

Apparently, director Poori Jagannath cancelled Sonu's leave from the sets on Wednesday to be in Mohali for the Indo-Pak cricket match.

Whether this was in retaliation to Sonu's refusal to get tough with the Big B for the camera, is not confirmed.
News BH
--
Mahi Gorele