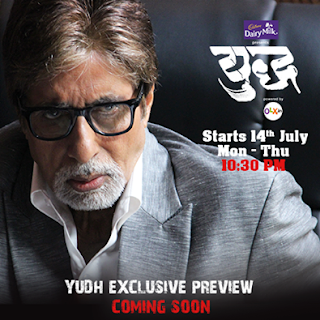 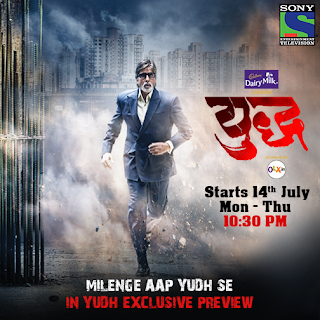 Amitabh Bachchan, currently shooting in Europe for R Balki's Shamitabh, is geared up for his first fiction show on television. He discusses the expectations that the home medium generates. Your first fiction serial Yudh starts telecast this month. How was the experience of shooting on television, and how was it different from shooting for feature films?  Apart from the fact that we shoot for television, I would imagine the technique and the creativity relate entirely to film. Because Yudh from its very inception has been designed to be one that shall be finite in nature, a beginning, a middle and an end, it was perhaps comfortable to know which direction we were going and to be not making an attempt to keep the serial alive, endlessly.  How different was it shooting a serial as compared with feature films?  There was the liberty of time in compiling a story or an incident or a scene. Cinema is restricted to 3 hrs.Yudh shall, depending on the channel broadcast decisions, be on for 20 one-hour episodes, or 40 half-hour episodes. As a performer, this gave us a wider bandwidth in getting greatly more involved in the character and having the convenience of time to execute it.  You are paired with Sarikaji in Yudh. You have earlier done a film with her that never got released. How is the experience of working with her?  The one with Sarika, that has not been released is with UTV and they have not given us an indication as yet on its release, despite the fact that it has been in a state of readiness for some years now. But, with Sarika, this is not the only film that we have worked together in. There have been at least three. She is an accomplished artist, a national award winner and a joy to work with.  And what about the rest of the Yudh cast? Do you feel that the acting talent on television equals its large-screen counter-part?  By asking this you seem to unjustifiably indicate, that those that perform for television are lesser in talent! With due respect, may I just state that a larger screen does not necessarily validate a larger performance. Television may have been sized down technically, but the performers on them should never be looked upon as being lesser.  I agree. The acting talent on television is impressive.  Look at it this way. Haven't performers from TV gone on to film with similar talent and excelled? And has not the reversal been equally constructive and acceptable? The cast of Yudh, hand-picked by the creative team, headed by Anurag Kashyap, generally associated with the larger screen, are all exceptionally talented artists. It has been a learning experience for me to be in their company and their ability.
Amitji, how would you describe your role in Yuddh?  Yudh is the short form for Yudhistir. He is a real-estate and construction company head and owner. He faces the obvious business competitiveness as do all businesses, there is a complicated family situation which he has to deal with, politics naturally falls into this malaise, and he is dealing with a debilitating disease which could turn out to be terminal. How he shall deal with all these situations is what the serial is about. There are several interesting tributaries to the story, which hopefully, shall make each episode leave a lasting impression on the audience.  Do you think the serial has the potential to stretch itself out for another season? If so, where would you find the time to accommodate it?  Whether the serial has the potential to stretch itself out, is for the makers to decide. If there is potential, we shall certainly give it due consideration. And if the due consideration fructifies, time shall be found to accommodate it.  Do you watch Indian television? What are the shows that you enjoy?  Yes I do. News, sports and some of the reality shows, the serials, all find an audience in me.  You are also getting ready for another season of KBC. How would the new season be different from the earlier seasons?  Yes KBC starts in August and preparations are on for that as well, and it would not be prudent of me to disclose just yet what the changes are. But suffice to say that the basic format shall obviously remain the same. The dressings will project the difference.  Do you enjoy the role of crusader-anchor on KBC, as it gives you a chance to help the needy?  Yes, I do. There are many contestants that come to the game show with great aspirations and expectations and if through the show and the game, we can give them an opportunity to become a game-changer in their life, it gives all of us great satisfaction. Kyunki yahan sirf paise hi nahin ... Dil bhi jeete jaate hain.  In the meanwhile you are in Europe shooting for Balki's film. How has the experience been so far?  It has been exhilarating!!

The film is named Shamitabh, which is very close to your own good name. Is that a coincidence?  I do not have the liberty or the permission to reveal that yet, but on seeing the film there shall be greater clarity. How different is this experience of working with Balki as compared with Cheeni Kum and Paa?  Each one of Balki's films with me has been novel, out of the ordinary and most challenging. Shamitabh is no different.  Dhanush is an unabashed fan of yours (as we all are). How would you describe his and Akshara's ability as an actor and a co-star? Dhanush is an exceptional artist who enjoys huge fan and star following in his own territory in the South, as well as in the project that he did in Hindi in Mumbai. I am not aware of him being an unabashed fan of mine; quite the contrary. Akshara's is a first effort, which does not look like a first.  What other movie assignments have you said yes to? Shoojit Sircar's Piku, Vidhu Vinod Chopra's production directed by Bejoy Nambiar, and a few others have been green lighted. Once I get closer to their schedules I shall be in a better position to talk of them.

--
Mahendra Gorele
Posted by Mahendra at 11:16 AM No comments: