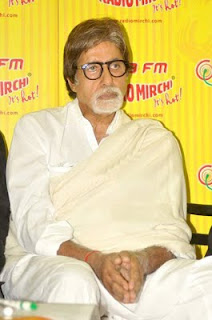 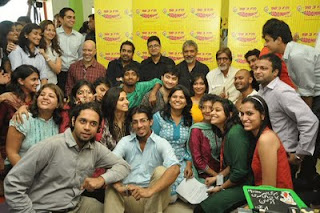 The Radio Mirchi team this morning, with team ‘Aarakshan’ in their studios … smart, bright, qualified, confident and happy .. 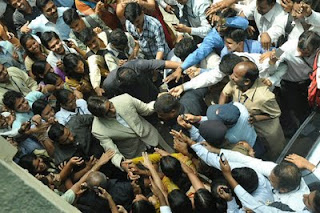 Outside the CNNiBN studios later and the affectionate well wishers before the grilling begins inside .. 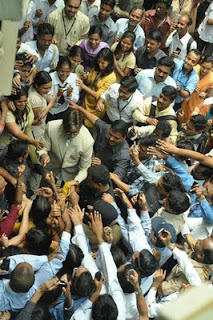 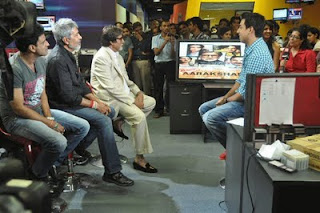 Inside CNNiBN and an entire army of journalists and reporters with us ‘Aarakshan’ and the queries .. 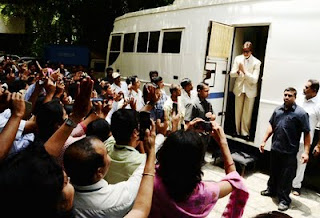 One over, another opens. One exuberant, the other restrained. One with lighter heart, and the other with issues. One location, one medium, one profession, one person - two different identities !
One, a flamboyant modern singing dancing, action oriented. The other brittle, principled, erudite but balanced. One fighting against elements that corrupt society, the other fighting against elements that corrupt the system. One victorious through feats of physicality to protect individual and personal, the other attempting to be victorious through deed and integrity.
Two films. Two stories. Two directors writers, musicians. Two productions. One common denominator.
I am privileged to be in a situation that denotes that denominator. I have not been in such company for some time, a long time in fact. Most of the epithets that come my way are constructs of the media - angry young man, angry old man, AB, aby baby, big b, big boots, star of the millenium, sadi ke mahanayak, shahenshah …
I have never identified myself with any, nor am I ever pleased in its reference. But you do not argue with the media, neither do you ever ever point to them of error. Media does such construction for ease of reference. It is their professional etiquette perhaps or a necessity. It is their ingenuity, their clasp of the medium. Their headlines or captions are their test and they are masters of it. With increasing competition they need to outsmart the other, in word and speed. Speed more, for, the electronic and the radio waves, the internet connects are moving at the speed of light. It must require an incredible amount of immediate response cycle and astonishing intelligence to be alert and inventive at notice time of … like … nothing ! That is an unbelievable quality requirement. And they live up to it and deliver day after day, hour after hour, minute after minute .. 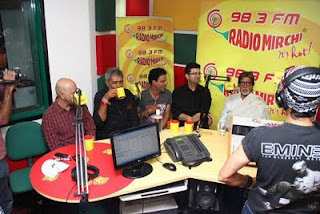 They are proficient in their job. We aim to be proficient in ours. Our respective responsibilities are significant. Not just to those that contribute to us, but somewhere to ourselves as well. There is a desire within us to be diverse and different, to attempt variation for the betterment of our craft. Circumstances at times do not permit us to do that. Our own uncertainty and fears hound us through out. Once riden why get off on another horse. Why change tracks when there is no need to change direction. But those that assess us and watch us microscopically, keep insisting on us, as though it was a task not accomplished. It could be a way of inciting us, or it could be a genuine attempt to provoke us into submission. They may or may not be right, they have nothing to lose. We have and shall always have to be right, or perish.
I do sometimes get the impression that whenever someone that ‘has it all’ attempts to go that extra mile, to expand, to achieve, to accomplish, forces that govern opinion and information, sense a need to demolish the experiment. I may be wrong in my definition, but I am certain of the outcome - well … as far as certain cases are concerned. And I would not put it beyond me to place certain personal cases as example.
In the beginning there was light and camera and studio and the thrill of work. It soon transposes into the need for recognition through success.Then even greater success and finally to maintain the top most peak and remain there forever. But that is never a possibility. Never. You will stumble and trip and fall. Fatally at times and that would be the end of the road. There are those however that continue despite their slide, in the hope that they shall climb back up again. There are very limited examples of such occurrences. They are brave that attempt such form, but each passing day brings them closer to anonymity and extinction. If the desire is survival. Survival because of a need, then I would never insist or even comment on the effort. If not, then it is better to realize the inevitable and stop, maintain the position of excellence and not participate in the run. But of those that need to, without need. Who look upon it without effect or result. Who desire to because the craft is inviting enough. Who are besotted by the romance of the profession. For them the scales are different. They are not on the step wheel of life. For them it is the joy of company, of being in the midst, of being a part of .. and nothing more. And that is a state of liberation, of freedom.
Most freedoms the world over have been through arduous struggle and strife. No freedom has ever been achieved without it. May all of us be free. May all of us achieve that state. And may all of us recognize the struggle that accompanies it.
Love .. and with struggle

Amitabh Bachchan
Posted by Mahendra at 5:01 AM 2 comments: