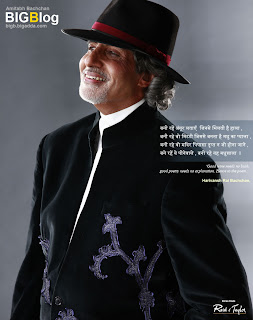 Where does the energy come from when time constraints push you to perform and execute at break neck speed. Where does an old man of 67, a senior citizen rustle, up the courage to go through the prosthetics for 4 hours and step out into the wide world of heat and unreal temperatures. Where ?

Its the desire to fulfill, to follow commitment, to keep to the time limits prescribed by the location, to help out in home production and above all to be able to enjoy being and doing what we like doing.

The location was the tarmac at the Chhatrapati Sivaji Maharaj domestic airport. KingFisher Airlines graciously gave us the facility of the use of their aircraft and staff and they were marvelous at that. Soon after wards we shifted to the mock up at their academy for training cabin crew. A couple of dress changes in a cramped up set without air conditioning and finally the end of the day around 9 pm. There were meetings lined up thereafter and they have just finished. So even if it is late, there is desire to communicate to the EF that they are not forgotten.

In between all this hustle and bustle there was the IPL and the final tonight. So Deccan Chargers won !! Could not see all of it, but it seemed like a close call for either team. Deccan were fancied winners, but the progress that Bangalore made had been phenomenal too. And this over we now get into the T20 world cup in England starting in a week. More cricket, more television and many more nail bitten fingers, because now its the world in competition.

We shot this morning at the tarmac of the airport. You go through a special gate and security. And you drive right up to the aircraft parked in a distant corner and you cannot but wonder and be amazed at the parking bay of the private jets. There must be over 50 of them. 50 private jets !! All belonging to individuals or their corporate companies. This is a remarkable sight. A couple of years ago there were hardly a couple of turbo prop King Air at the most. But now… every make of private jet in line - the GulfStreams and Bombadiers and many more, whose name I cannot give. India develops.. and fast !!

The endeavor to make this be with the reader soon is compelling me to write faster than normal. Time clicks away, an early morning call tomorrow for PAA and I must hit the bed soon. So….

Good night !! And may these quotes fill your life with laughter and happiness..

1. The nicest thing about the future is that it always starts tomorrow.
2. Money will buy a fine dog, but only kindness will make him wag his tail.
3. If you don’t have a sense of humor, you probably don’t have any sense at all.
4. Seat belts are not as confining as wheelchairs.
5. A good time to keep your mouth shut is when you’re in deep water.
6. How come it takes so little time for a child who is afraid
of the dark to become a teenager who wants to stay out all night?
7. Business conventions are important because they demonstrate how many
people a company can operate without.
8. Why is it that at class reunions you feel younger than everyone else looks?
9. Scratch a cat and you will have a permanent job.
10. No one has more driving ambition than the boy who wants  to buy a car.
11. There are no new sins; the old ones just get more publicity.
12. There are worse things than getting a call for a wrong  number at 4 AM. It could
be a right number.
13. No one ever says ‘It’s only a game.’ when their team is winning.
14. I’ve reached the age where the happy hour is a nap.
15. Be careful reading the fine print. There’s no way you’re going to like it.
16. The trouble with bucket seats is that not everybody has the same size
bucket.
17. Do you realize that in about 40 years, we’ll have thousands of old  ladies
running around with tattoos?  (And rap music will be the Golden Oldies!)
18. Money can’t buy happiness — but somehow it’s more comfortable to cry
in a Corvette than in a Yugo.
19. After 50, if you don’t wake up aching in every joint, you are probably dead!!
20. Always be yourself because the people that matter don’t mind, and the ones
who mind, don’t matter .

Posted by Mahendra at 4:55 AM No comments: