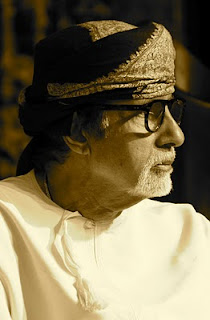 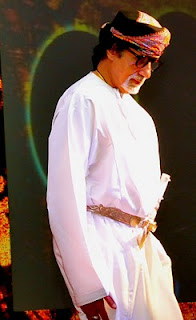 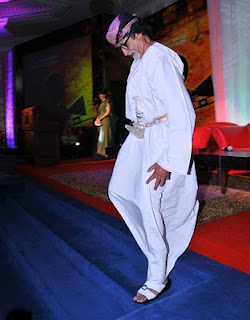 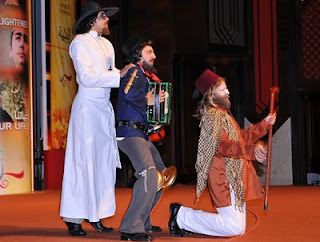 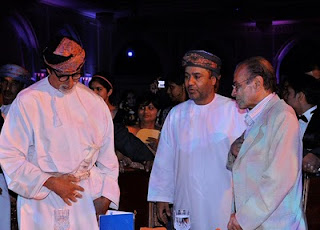 It is not necessary to share everything with your true friend.
It is necessary that whatever you share must be true

I confirm that whatever I share with my friends here on our blog is true. Yes I confess I do not share everything, but whatever I do is true.

The Omani dress in all its splendor and grace there for all to see. It is a little different from what is generally seen with some of the other Gulf wear, but all the same not without its own special distinct character. The head gear is a lot more colorful and does not have the large spread of other countries, nor does it have the black circular rope that keeps the head gear in place. Incidentally that black circular rope is made from camel hair.

Also the tassel by the side of the gown is smaller in Oman as compared with the others and of course the khanjar has its unique position and presence. It is generally worn by all at the time of a formal ceremony, or when there is occasion for an important meeting with say Ministers or Royalty.

But I have to say. No matter where and which Government office I visited, the cleanliness and order was to be seen to be believed. Everything spick and span, nothing out of place - a neatness that spilled over to the individuals too that we met. Quite remarkable !!

The picture that you perhaps will not comprehend above is the act from ‘Amar Akbar Anthony’ preformed by artists from Syria, especially brought down to Muscat for the occasion and rehearsed within a week to perform the song on stage. I never realized there were people in Syria that were familiar with our films. Maybe they weren’t and just came in to do an act.

But all said and done, as predicted by one of our FmXt - its good to be back home. A little quiet, but it is home. Abhishek is here shooting for ‘Crooked’ and thats it. Aishwarya shoots in Chennai for ‘Robot and Jaya attends Parliament in Delhi.

In the afternoon it was a promotion of another of our films on release -’ Vihir’. ‘Vihir’ is a Marathi film that AB Corp has produced, directed by a young Pune Film Institute graduate, Umesh Kulkarni and has been getting huge recognition in several international film festivals. It has just come back from the Berlin Film Festival where its showings were capacity full in the theaters and where it received an immense amount of critical acclaim. Marathi cinema within the last couple of years has been coming out with some very exciting fare. Exceedingly well made films with great emphasis on content and story. I feel happy for the young director and we as a company shall continue to invest in regional cinema and to be able to promote fresh talent.

In fond remembrance and love to those that venture into this little realm of ours ; our little world that brings continents, faiths, emotions together. A world that we hope grows an envelopes all those that live with peace and harmony, care and concern, affection and love ..