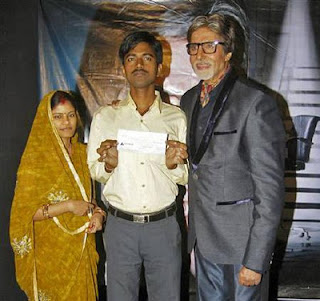 An office worker too poor to own a television set has won an unprecedented $1 million on TV game show "Kaun Banega Crorepati".
Sushil Kumar's win this week drew comparisons with the plot of 2008 Oscar-winning film "Slumdog Millionaire" and, like its fictional protagonist Jamal, the 27-year-old also watched the TV show as an escape from penury.
This is the first time a contestant has won a million dollars on the popular TV show hosted by Amitabh Bachchan. The episode will be broadcast next week and Kumar takes home 3.5 crore rupees (about $720,000) after tax.
Kumar, who watched the show at a neighbour's house because his family was too poor to afford a television set, said he had not made any grand plans for the money, a fortune in a country with a per capita income of $1,265.
"I'm going to repair my house, fulfil a few basic needs and then move to Delhi to study for the civil service exams," he told Reuters in a telephone interview.
Kumar works as a computer operator in a government office in the impoverished eastern state of Bihar and earns 6,000 rupees (around $120) per month.
"Our house has almost broken down and we have a lot of loans that have to be repaid," he said.
"If it hadn't been for this money, I would have gotten old before I sorted out my life."
"I've been getting a lot of suggestions about what to do with the money, but right now I can only think about my dream of getting through the civil services exam," he said.
"Slumdog Millionaire", shot in the teeming slums of Mumbai, tells the story of a young orphan who wins the TV game show against all odds.
(Editing by Tony Tharakan; and Louise Ireland)
Posted by Mahendra at 12:16 AM 1 comment:

After distributors baulked at the idea, Amitabh Bachchan 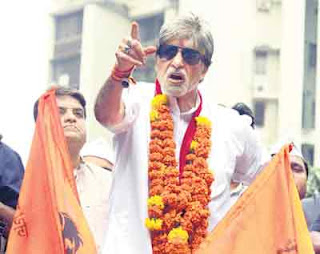 No longer a 2-day affair

After distributors baulked at the idea, Amitabh Bachchan, who had a guest appearance in RGV's Department, will now spend two weeks shooting for his role of gangster-turned-politicoRam Gopal Varma's friendship with the Big B is the industry's best-kept secret. Varma is perhaps the only man in the fraternity, who can get away with murder as far as Bachchan goes. Which is why, we are not surprised to learn that a cameo in Varma's new film Department, which required only two days of shooting, has now turned into a full fledged role that will require Bachchan to dedicate at least two weeks.


"Initially, Ramu conceived Bachchan's role as that of a gangster-turned-politician, based on Arun Gawli, with a phantom presence through the film. Audiences would have seen him in silhouette and would have just heard his voice. But then that was seen as a commercially weak proposition," says a source.Apparently, the film's distributors baulked at the idea of the Big B as a shadowy presence. That's when Varma invented the zany, rustic, anachronistic gangster which is a bit of a cultural anomaly. "The role demands that Bachchan wear a dhoti and bright socks. With glares and a desi bearing, this will clearly be the most outlandish look he has ever sported," added the source.Apparently, the actor helped Varma select the 'look', although it didn't quite match the superstar's taste. Varma said the look is inspired from research that proves that most gangsters aspire to better their social standing."Amitji is playing a gangster-turned-politician. All gangsters end up rolling in money, but aren't really comfortable with what to do with it. I loved the idea of putting Bachchan's character of an uneducated and unsophisticated man in an environment in which he isn't comfortable.The entire film is based on the conflict between Bachchan, Rana Daggubati and Sanjay Dutt. We have a fortnight of shooting left," said Varma.
News mid-day
Posted by Mahendra at 12:01 AM No comments: