Jallianwala Bagh commentary and the final assault on General Dyer 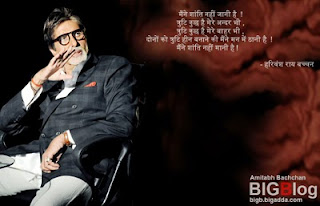 Jallianwala Bagh commentary and the final assault on General Dyer and Odwire in London as a revenge killing by Udham Singh came through by the early hours of the morning. Had turned in by 3 am and was at the studio by 6. Morning times are always good for voice quality. It is fresh and clear and has a unique resonance about it. The makers were happy, the job was done and now we all look forward to seeing it all put together for the son et lumiere !

Chennai beckons for a felicitation to the Chief Minister Mr Karunanidhi - he having designated land for the film industry of the South. He has been a stalwart for cinema much before he went into politics. A great writer and lyricist, his dialogues in the films are most memorable and have been quite unique. His felicitation by me shall be a bit of a reversal in nostalgia. My first National Award for the promising newcomer for 'Saat Hindustani' , my very first film, was presented by him at a glittering ceremony, well not exactly glittering, ceremony in Chennai, then known as Madras. It was an awkward moment for me. I had been shooting for a film there 'Pyaar ki Kahani' a film that came to me by default. It was to have been done, by then the very popular and most successful star from the Hindi firmament in the South, Jitendra. Because of the number of films that had been taken by stars, all of them were unable to give proper dates to producers. The producers went to certain associations that enveloped the industry and a dictat was passed. No star would be allowed to sign more than 9 films at a time, I think. Jitendra had crossed the limit and so this project was put up to me, because he would not be allowed by associations to partake in them.

It was a lovely experience doing this film in Madras, a first for me. The magnificence of the studio system was efficiently prevalent. Large systematic studios, clean, well organized and the nature of work, methodical. There was Anil Dhawan, elder brother to David Dhawan, or was it the other way round. Farida Jalal the effervescent actress and a fond friend of Jaya and the dynamic Tanuja.

It was a remake of the very successful Tamil film 'Kai kudrtha Deivam' starring two of my favorites from the Southern film world - Shivaji Ganesan and Savitri. He a master in his craft and one whom I began to admire after seeing this film. And then the lovely and the most beautiful face of the Industry, Savitri, a most consummate natural, the likes of which I was never able to see anywhere.

Madras was where my brother Ajitabh was posted in a shipping firm those days. The city was sparse. There was but just 2 hotels that spoke of any urban existence. Otherwise it was a calm quiet and very energized place. It was the first film premiere of my film on this in Bombay then, now Mumbai. It was funny and odd to be at the show that night. I felt awkward and self conscious. But the only one that threw caution to the winds in my praise was Mehmood Bhai, the great comedian, whose brother Anwar Ali and I had worked in 'Saat Hindustani ' and in who's house I was staying.

Madras was pristine and steeped in culture. Ethics and ethos prevailed in all homes. And in this very orthodox environment, there was a Thunderbird, the most coveted sports car of the era with a friend of ours. At nights after pack up we would go off for drives, listening in those days to music in the car through that old time cartridge cassette. It was the American system device. A square - oblong cased container the size of 2 cigarette packets put together was our source. It had pre recorded music on it, generally from the USA. You could not record fresh on it and there were many a time when we would have listened to the tape so often that eventually we would destroy it.

There were no large buildings. Simple practical homes, great places to eat idli and the exquisite sari store Nalli's. We would carry much from this store for the ladies at home and for the men there was this great fad of wearing lungi's from the same store. So much to reveal and talk about the south and its most organized working and of course whenever they had spare time, to watch our films. And in reverse make them again. Wonderful days !! Some other day there shall be greater description of them.

From Chennai there shall be Cochin in Kerala and another felicitation. This time for our very own Resul Kutty, the Oscar winner for his work on Slumdog.

4th shall be eve of Abhishek's birthday, he being born on the 5th and there shall be some people over to the house. It has been a while since ….. ……

The pressures of time still keep me away from them yellow lines. But rest assured one day I shall surprise them …

My love floweth over …

Posted by Mahendra at 7:32 AM No comments:

Hockey players asked me for funds Big B

Bollywood legend Amitabh Bachchan wrote on his blog that the Indian hockey team has asked him to spearhead a fund-raising concert to be held in Chandigarh.

"The Hockey National Team is on its way back from training camp at Pune and has a desire to meet me...The Hockey team has been struggling with their association and handlers for their pay to be settled," Bachchan writes in his blog.

"It has not happened they say till time and are anxious that I spearhead a concert to be held in Chandigarh to collect funds for them and their welfare. I have asked for details and shall see what can be done for a cause as noble as this," he added.

The disgruntled national hockey players had gone on strike in Pune earlier this month protesting non-payment of their dues and incentives.

Posted by Mahendra at 1:32 AM No comments: