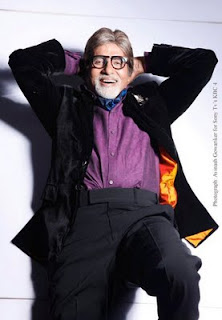 London , U.K       May  16 ,  2011     Mon 10 : 56 AM
Greetings from the United Kingdom, which as you may observe is where I have landed myself this morning.. and which as you will observe in time will be where I shall be launching the Bachchan Bol Vog facility for the UK .. and which in time to come, perhaps not very long, about a month, shall initiate the possibility of connecting to my Vog worldwide … excited !!
This is me languishing on the floor of the photoshoot as per Avinash Gowariker’s very passionate appeal. He felt it would make a great picture, so there .. the dress id KBC, and yes its Rohit Bal .. so good and vibrant with his colors !!

Thats the Sunday crowd, just before boarding for London later in the night .. enthusiastic as ever and now even more so because of the platform I have had built to climb and be seen by those that come in at the back ..

This is kind courtesy the platform which I stand on so others at the back can get to see me. It does look like I have practiced some kind of weird Yogic levitation, does it not …

And here on the streets with the first print publicity of ‘Bbuddah - hoga tera baap’ ..
Bachchan Bol gets all geared up in the coming days. We launch this in the United Kingdom on the 18th of May. Its my Vog, or in simpler terms, my Voice Blog. Did any of you know how the word Blog came about ? Well it was WEB LOG first. Which was a description of something that was logged and retained on the web. So Web log. And then using the last letter ‘b’ from web and ‘log’ from the second word and Boom ! we have ‘lift off’…. BLOG !
The work on the finishing touches for ‘Bbuddah’ has begun in real earnest. Lots to do and times to be met. Release on July 1st is almost upon us and its that time of day when you begin to get all nervous and anxious for the finishing of the film in time. Being away from Mumbai is not a good idea, but what to do, these are commitments that go hand in hand with my work, so we get into it, delegate and hope that all moves well …
The grandchildren and Shweta are here, all grown up and adultish. Taller than I what I saw of them just some days back almost, and more leaner and mature. Such a joy to be with them and be able to converse and share conversation which I would with someone my age ! The kids of today are just not built to be kids. They move from the day of birth within a couple of months to adulthood !
I am keen to share the music from ‘Bbuddah’ with the EF, but need clearance from the music company, so do hold on to your horses for a while. There is a theme song for the film where Vishal and Shekhar have used what they call and what is internationally known as ‘Dub Beat’. Its been done for a Hindi film song for the first time and when you hear it on studio level speakers its like .. WHOAH !! Mix of Rock and Hard Rock, or whatever the terminology for it is .. apparently its very big overseas in the West .. so I am told !!
But really what has been most rewarding for me as an admirer of music has been the soft melodic number composed by the music duo - ‘Haale Dil’ .. they have asked me sing that and, horrid that I sound, I have to say that the tune and the melody and the words by Anvita are beautiful !
Also most rewarding has been a composition by V@S of Rabindranath Tagore’s legendary song written and tuned by him - ‘Ekla Cholo Re’, for a film by Sujoy Ghosh, my director of ‘Alladin’, has recorded for his film presently called ‘Kahani’ with Vidya Balan. It has been historic in its concept from the day it was originally composed by the great man, but to get a piece of it as an opportunity to sing it in a song has to be a moment to cherish forever. The quality of its composition and the words are just incredibly beautiful and it is only when you delve deeper into it that you realize the genius of the work. V@S have done a marvelous job with it and rendered it in a most unusual manner.
Ah !! So much to say and share and such little time to do so ..
But for the moment lets just concentrate on my visit here, its purpose and its great usage in connecting even closer to the fans and the extended family. More later … and much much more in the days to come …
My love as ever …
Amitabh Bachchan
Posted by Mahendra at 3:31 AM No comments:

Big B film in profits even before release 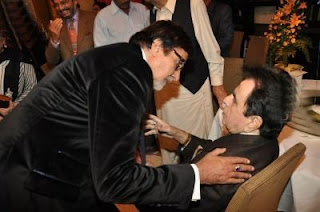 Big B film in profits even before release

Heard Amitabh Bachchan's Bbuddha, racing for a tentative July 1 or 8 release, is already in profit. A reliable trade source confirms that the film has been made at 10.2 crore.
"The post production on Bbuddha is happening at break neck speed. Amitabh has wrapped up his talkie portions and is said to be dubbing for it alongside Prakash Jha's Aarakshan that is due on August 12. And the satellite rights of the film have been sold reportedly at 14 crore! In other words, the film is a hit even before it hits the theatres."
Abhishek Bachchan, who is the producer, admits that the film has been made in the right budget. "It is a very sound investment," he says. So Big B's first box office hit of 2011 could well be on its way.
Posted by Mahendra at 1:02 AM No comments:

Posted by Mahendra at 1:00 AM No comments: