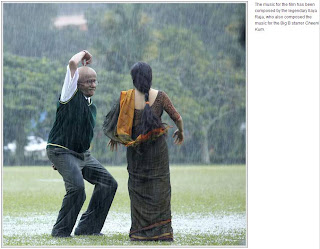 The tax exemption will help reduce ticket prices and will further help the movie business in its long run, said a statement.

Produced by AB Corp and distributed by Reliance BIG Pictures, "Paa" is an emotional story of a father-son relationship that had Amitabh playing Auro, a 12-year-old child suffering from progeria, a disease that accelerates ageing.

Posted by Mahendra at 6:51 AM No comments: 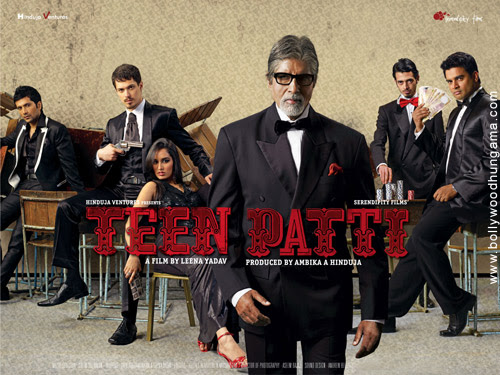 Teen Patti' would have been incomplete without Big B, Sir Ben: Director
By Robin Bansal


New Delhi, Jan 8 (IANS) Leena Yadav is ecstatic about her second directorial venture "Teen Patti" because she got to work with stalwarts like Amitabh Bachchan and Sir Ben Kingsley. She calls them magicians and says the two don't overshadow each other at any point in the movie.

"As soon as we finished the script, it was very clear in our heads that we can only make this film if Mr. Bachchan agrees to play the role of Venkat Subramaniam (the protagonist). The only choice for us was Mr. Bachchan and thankfully he agreed," Yadav told IANS over phone from Mumbai.

"And as far as Sir Ben's character is concerned, the film isn't complete without him. He starts off the film and we end the film with him and Mr. Bachchan. By importance of the script, his is an extremely crucial role," Yadav added.

So does she think either of the sexagenarians might outdo each other in the film?

"Not at all. At any level it wasn't about outdoing each other. They play two different characters and they play it to the T and beyond. They just stood their own beautifully and completely and brought two different flavours into the film which was needed. They work completely in character and hold their own," Yadav replied promptly.

Set in India and Britain, the film is about greed, deception and imagination. Oscar-winning actor Kingsley plays world's greatest living mathematician Perci Trachtenberg, while Amitabh plays Venkat, a reclusive maths genius from India. The two meet at a high rolling casino in London.

Throwing light on their characters in the film, Yadav said: "They have a very special relationship in the film which starts off with Mr. Bachchan's character admiring and looking up to Perci and the film is about the journey of their relationship.

"We needed a western actor to play a living mathematician. The role demanded an extremely strong presence and a great performer and Sir Ben was beyond expectation and totally correct for the role."

Was it easy roping in the 66-year-old Oscar-winner?

"He read the script and liked the part we were offering him and graciously agreed to be a part of the film," the director responded.

Amitabh, 67, also chipped in with creative inputs for "Teen Patti".

"Ever since the first draft was completed, he (Amitabh) has been integrally involved with it. He's been putting in a lot of interesting inputs in the script itself," said Yadav, who first wielded the megaphone for Sanjay Dutt-Aishwarya Rai starrer "Shabd" (2005).

Yadav says she admired the veterans' camaraderie both on and off the screen.

"They share great chemistry. There was a lot of mutual respect for each other between the two as obviously they are aware of each other's credentials. There was a very beautiful actor-to-actor relationship off screen between them and a lot of sharing when they would work on the screen together," she said.

"In fact, when I was shooting the scenes, all I had to do was set the scene, sit near the camera and say action and then just watch both the magicians do their magic," she added.

Posted by Mahendra at 5:57 AM No comments:

Bachchan, who has fans mooning over him the world over, has gone overboard in his praise for Modi and Gujarat after their meeting here Wednesday.

In his blog the filmstar states: "He (Modi) lives simply and with mere basic needs and most unlike the head of a state. He speaks with affection on development and progress. He is welcoming to fresh ideas and ideals. His oft repeated phrase of him being a CM, a common man, is not misunderstood.

"He does and acts as he speaks."

"He talks of raising the level of awareness for his state through tourism and I volunteer to participate in any activity that would help promote that," Bachchan wrote explaining his interest in promoting Gujarat.

Bachchan seems awestruck after the chief minister's discourse on Gujarat, possibly after the two meet and watched "Paa" together at a multiplex here Wednesday.

It shows in the blog. He goes on: "Did you know or were you aware that the largest number of heritage sites in the country are in Gujarat? This away from the historic Dwarka Nagri that lies submerged under the sea and is a subject of discovery and research, where architecture and monuments and complete palaces lie buried underneath. The rann - a massive and wide expanse of miles of white soil, that glows like it was embedded with millions of diamonds in the night, separating our borders with our neighbours, Pakistan. The historic temples - Somnath and Dwarkaji and endless places of great history, all within and still unknown to most of us. So much richness in our own and yet we cherish that which is not ours at times," Bachchan goes on.

"As I drive back we duck below a spanning sign on a bridge crossing that thanks us for visiting 'Clean and Green Gandhinagar'. I couldn't have agreed more," Bachchan writes.

Posted by Mahendra at 5:23 AM No comments: