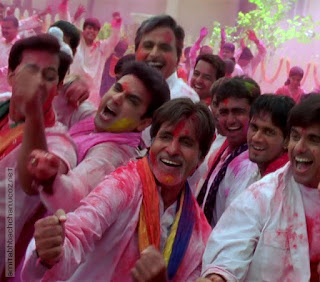 Sayantan Dalal
Actor Amitabh Bachchan is not only known for his flawless acting but also for his narrations and singing. He has done it before in a couple of films, but this time he will be lending his voice for a classic Bengali number.
Amitabh has now lend his voice to Nobel Prize winner Rabindranath Tagore's masterpiece song titled Ekla Cholo Re in the upcoming film, Kahaani. Talking about the song Amitabh says, "Singing Rabindra Sangeet for the first time was the greatest revelation. The beauty of the language, the lyricism of the tune and its dhun are outstanding. This particular song, incorporated by Vishal-Shekhar the world famous number — Ekla Cholo Re, expounding to all that if no one comes to you at your calling then walk alone. The song is truly awesome and worthy of all awards."
Director Sujoy Ghosh says that the song is about a human's solitary journey through life. "And that's what the central character in the film does," he says. The lead actor too, he says, seemed to grasp the nuances of Big B's rendition and put them in her character.
"I took to filmmaking for five reasons — Satyajit Ray, R D Burman, Kishore Kumar, Anand Bakshi and Amitabh Bachchan. After working with him (Big B) I decided that Mr Bachchan would be part of every film that I make, which is why I persuaded him to sing for us in Bengali," he reveals.
News dnaindia
Posted by Mahendra at 3:51 AM 1 comment:

Amitabh Bachchan in awe of `Moneyball`

Amitabh Bachchan in awe of  Moneyball
Mumbai: Amitabh Bachchan is spending his free time resting and watching films. After 'Artist', he saw Brad Pitt starrer 'Moneyball' and the megastar can`t stop heaping praise on the film. "Watched `Moneyball` too with Brad Pitt and a host of excellent performers... you never get the feel that they are acting," Big B wrote on his Twitter page. "`MoneyBall` will be a delight for baseball lovers and followers... the intrigues and behind the scenes that are unknown to most !!" he further posted. IANS
Posted by Mahendra at 3:44 AM No comments:

the idiot continuously gives example of its idiocy .. the smart and learned silently allows him to do so

अकल्मन्द उसे शांति से देने देता है …
the idiot continuously gives example of its idiocy .. the smart and learned silently allows him to do so ..
No these are not lines from verse or from my Father's, though I can say with some degree of certainty, that had he heard them from me, he would not have disagreed. I know not why and what made me say this now and why I composed them. But now that I have may they remain with us on our platform …
There comes a time in the lives of us, as must it should with all, when we face the idiocy of some, in acts and words that defy civility and order. Joining them or opposing them would draw us down to their level and standard. The patient and more learned would silently allow them to continue to do so. Idiocy shall not prevail in civil society. It shall perish, but perish in time. It takes a while for those that are subjected to it to be able to identify it first and then to give it time to play out. The act of lunacy is not important, the world is full of them, they shall exist. The aftermath is not important either, for by then it has played itself out. It is the period in between, of patience and silence that is testing. The period when we allow the aberration to exist. That is the real test, a test of some reckoning and character and culture and all that the good that we have imbibed or shall imbibe in the future …
True test of time determines the attitude that we adopt during such trauma – if it can be given such position and importance.
Many that read today may infer that there has been some troubled moment for me to express thus. No there is none. And even if there was, it would defeat the purpose of what I say in mentioning it.
The ask during such situations is exasperating, trying. Those that can pass through this moment, come out in better form. Those that cannot, may not necessarily weaken, but would most certainly destroy a portion of themselves within. Unnoticed, it would remain perhaps in the subconscious and erupt at a most inopportune moment. That really is what needs to be feared. Internal damage, not caused by the self but by another, effectively. Permitting another to take over your mind and body may just be the most distressful. I would consider it to be a defeat and I would never want that any should ever lose on this count.
Many argue that not expressing the anguish of such, destroys us too from the inside. May be. But I would consider it another fault if it remained within, as an anguish, to be allowed to fester, to be allowed for it to be remembered, to allow it to be looking for that opportunity when it could be paid back with appreciable interest. No that would not be my recommendation. Mine would not permit it to creep up in the front lines of my attitude. They would either be washed away soon, or at most be present as a nondescript shadow in the back of the line. Never to be touched, or given notice.
Many would argue how its recurrence could be prevented then if it does not get the treatment it deserves. Valid I should say. But not paying attention to it, or never being in a situation where it could get an opportunity to perform again is how I would approach it.
It would take a while and a great amount of resilience. But resilience too is an attribute that we must needs develop. It builds character and dignity – aspects that would stand gloriously in any situation come what may.
"I would like to tell you a martial story, perhaps I already have, that will amaze you. It is of Pergamon, an Ancient Greek civilisation that existed on the shores of present-day Turkey. This story is known because of a war memorial they left behind. It was to celebrate a victory over invading Celts, and they erected this monument at the very centre of their great city, before the temple to their gods. It consisted of a series of bronze figures, struggling against their mortal wounds, their accoutrement of war still in hand. They were beautiful, noble and defiant until their dying end. These figures of war, these warriors, were given the ultimate prize, immortalised in sculpture for the ages, to be held up above the citizenry in remembrance of their greatness."

"But here is the rub; here is what startles: these great warriors are depictions of the Celts, their enemy in battle, over whom the Pergamenes were soundly victorious."

"Think upon it, it is extraordinary. These people of Pergamon immortalised their enemy in noble memorial. These people were strong enough, confident enough in their own culture, to remember their own victorious dead by saying, "Our enemy was great and noble and died with dignity. In our victory over them, so we are all the greater, all the nobler, all the more dignified."

"To vilify one's foe is to fear them: it ultimately dehumanizes both parties equally. True victory over one's enemy is to conquer such fear. Fear and wrath: they blind; they betray good judgment; they poison the noble spirit. Pergamon did not make monsters of their enemy to defeat them: these were a people strong enough to acknowledge the dignity and humanity of their sworn foe despite war and death, for they knew that to make monsters of the enemy is to become monstrous oneself. Their victory was all the greater."

"The measure of true greatness of an individual, as much as of a country, is to understand this truth. Against such greatness, no adversary can ever win out, no other civilisation can overcome such a fatal embrace." ~

In deep gratitude to a dear friend for this contribution …

Need I say more on the subject ..

Good night and may the God's be with you, and for the non believers, your pillow …

Posted by Mahendra at 3:29 AM No comments: