My sincerest thank you’s for your kind words BigB

Jalsa , Mumbai       Dec  22,  2010     Wed  10 : 36 PM
My sincerest thank you’s for your kind words and affection for my Mother, in remembrance. It was endearing loving and most family like, even if extended. To have knowledge of the fact that there are many among us that share their feelings is by itself such a huge force. One that gives strength and courage to face another day another moment, in a harsh world.
Most of the day was spent figuring out what might I do for the coming days. Which projects to begin, which to reject and which to accept. I must admit that the options are not too frightening - the numbers and the interests are waning, but yes, there is the odd one that inspires and excites. And one of such was officially launched this evening - ‘Aarakshan’. Its a film by Prakash Jha of ‘Rajneeti’ fame and has a host of very talented people working together. Saif Ali Khan, Deepika Padukone, Manoj Bajpai, Pratik and written by Anjum Rajabali and Prakash in collaboration.
Aarakshan or Reservation, is a burning topic in the country, dealing with reservation quotas for those that are under privileged, from backward classes and who because of social and cultural constraints have never had opportunity to mix mingle educate themselves with those that are more privileged. They have little provision or occasion or sufficient finances to pursue what those that can do, and so the government passed a law in parliament which now protects them by assuring them a certain percentage of presence in all such institutions. It being 33 %.
The passage of such norms in the country created revolt among the student community and others as well. Particularly from those that came from privileged backgrounds. They argued that merit should be the yardstick for admissions and not a designated quota. Because what was happening was that a merit of 80-90% was being denied a seat because there wasn’t sufficient percentage left. The quota of 33 % assured even someone with merits of say 50%, much lower than the 90 percentage, to surpass him. The film deals with both aspects. Yes the quota for lesser merit may be argued and at the same time what does one do for those that have never had an opportunity to or privilege to even attempt a position. It is dramatic, pertinent and I think intelligently crafted. We start in Bhopal next month and on a non stop schedule would be ready for release on the 12th of August 2011. God willing ! Inshallah !!
Finding myself alone at home in the evening - the others all at work in different parts of the city - I watched film. Was keen to remain in the Da Vinci ( got the spelling right this time ) mode and so drew up the sequel, Angels and Demons ! Fascinating. Edgy and more exciting than the previous. Pertinent messaging of religion and science needing to exist together and that next time in Rome the statues and churches and monuments and every corner of the city needs to be looked at with a great deal of respect and some element of intrigue !!
Science has continuously defied religion and religion has not relented. For, there are elements in both that have no justifiable explanation. There is belief in one and belief of another kind in the other. And one does not really know which belief needs to be believed. Science with its rules and laws and logic and equations challenges abstract belief. The edifices of religion have evolved through great perseverance and majesty. The edifices of science build structures every day. If it took billions of years for matter to take shape and bring us into the existence that we are privileged to be in today, then surely it cannot be overcome or explained or removed through a hundred years of human endeavor. There is no end to human endeavor and perhaps in a million years we too shall be able to have respectable answers to the many uncertainties of life. But till that happens we need to respect and honor and be astonished by those that had the foresight to realize its importance and potential. Each initiator of a particular religion, was God incarnate. Because for someone to have such deep knowledge and reckoning and understanding, so many many centuries ago, must surely be equated with the Almighty, or some unknown force that surpassed the beliefs of all.
Human beings needed answers. What was happening around him or her was beyond explanation. And that gave rise to the concept of religion and the unknown. Religion is a success story and one that shall never face failure. The day it does humans would be a different species. Faith and belief would be non existant terms, not just in prayer, but in other more metaphorical exigencies.
Ever imagined a world without religion, faith and belief ?? A tough call ! Though many atheists would have several potent answers to the question !!
I need to answer some questions that are more inviting at the moment - namely a short walk to my pillow !
May you all rest well and dream pleasant dreams … their fulfillment is the challenge for tomorrow !
My love in abundance ~
Amitabh Bachchan
PS There was another award ceremony last night ! Big Fm the radio station and Star combined to honor awardees with their decade old contributions to cinema. Yours truly got the actor of the decade, Aishwarya the actress .. many other fraternity present and partook in song and dance and camaraderie .. a happy feel !

with Veeru Dharam ji … always a joy to catch up with him ..

Anushka and Ranvir from their latest succes Band Baja Baraat .. my best to them

getting the award from Mrs Tina Ambani and Javed Saheb

Chintu … buddy from so many films together, now in my relation through Shweta, she being married to his sisters son ..

In the audience .. javed Saheb at his witty best …kept us in splits with his remarks on the proceedings .. at the far end and a bit out of focus the lovely Vidya Balan

Aishwarya with her decade award ..

Posted by Mahendra at 5:28 AM No comments:

Smita had premonition about my Coolie' accident: Amitabh Bachchan 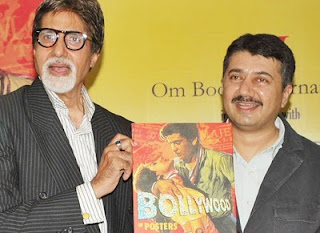 Smita had premonition about my 'Coolie' accident: Amitabh

Mumbai, Dec 22 (IANS) Almost three decades after his near fatal injury during the filming of a fight scene for the film "Coolie", Bollywood megastar Amitabh Bachchan Wednesday revealed that actress Smita Patil had a premonition about the accident a day before it took place.
"Smita was a unique lady and she had a premonition about my accident," Amitabh told reporters here.

"I was shooting for ‘Coolie' in Bangalore in 1982. One night at about 1 a.m. I got a call from Smita. She said, ‘I'm sorry to disturb you Amit-ji, but are you okay?'. I said yes I'm fine. Then she said, ‘I had a really bad dream and I just wanted to find out if you were okay'. Next morning, I had that accident on the sets of ‘Coolie'. It was just unbelievable," Amitabh said.

"Then, throughout my two-three months in the hospital, she was a regular visitor and even when I came back home, she used to come every evening to enquire if I was doing well. I can never forget that," he added.

The 68-year-old walked down memory lane and remembered the incident while talking about Smita's son Prateik, who will be working with the actor in Prakash Jha's forthcoming film "Aarakshan".

Amitabh said that working with Prateik will be an emotional experience for him.

"This film is going to be my first association with Prateik. Whenever I see him, I think about his mother. The resemblance, the attitude, is very much like her. I'm afraid that it's going to be a little emotional for me working with him because Smita was a very dear friend," he said.

The film, slated to go on floor Jan 15, also stars Saif Ali Khan, Deepika Padukone and Manoj Bajpayee. It is based on caste-based reservations in government jobs and educational institutions. It will be shot in Bhopal and the makers are looking for an Aug 12, 2011 release.
Posted by Mahendra at 2:20 AM No comments: 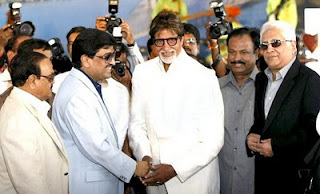 Mumbai, Dec 22 (IANS) Even though Saif Ali Khan is veteran actress Sharmila Tagore's son, the actor says he joined the Indian film industry chiefly because of Bollywood megastar Amitabh Bachchan.
The 40-year-old actor is all set to work with Amitabh in Prakash Jha's next "Aarakshan". This is the second time that both the actors will share screen space after the 2007 film "Eklavya: The Royal Guard"

"I joined films pretty much because of Amitji so it's always an absolute honour to work with him and I'm glad I got another opportunity to get associated with him," Saif told reporters here.

Big B too was elated to know about Saif's thoughts and revealed that he felt honoured after hearing what Saif had to say.

"I have worked with Saif in ‘Eklavya', that was my first association with him. I am really honoured and privileged to know that he feels that I was in someway responsible for his entry into this film industry. I'm delighted to work with him again," said the 68-year-old star.

Amitabh also remembered some of the moments that he spent with Saif.

"Today, I remember one of the very old moments. Saif was six-seven years old and he had visited my sets when I was shooting a song in Filmcity. Sharmila ji, his mother, said that he wanted to be with me and see the shooting.

"He was a very confused looking youngster then, who stood at the top of the hill, sitting on a rock all by himself and watching the shooting. From then on I have watched him grow so brilliantly to a fine actor with a lot of variety in every performance," revealed the actor.

"Aarakshan" also stars Deepika Padukone, Prateik and Manoj Bajpayee and will go on floor Jan 15. It is based on policies of caste based reservations in government jobs and educational institutions.
Posted by Mahendra at 2:11 AM No comments: