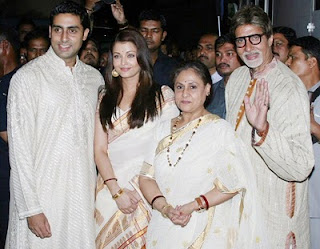 Up at 5am and off to pay my respects at various spots of divinity Haji Ali dargah the Babulnath Temple BigB
Jalsa , Mumbai       April 22/23 ,  2011        Fri/Sat  1 : 20 AM
Up at 5 am and off to pay my respects at various spots of divinity - Haji Ali dargah, the Babulnath Temple and another small dargah on Worli sea face. And it is cliched but, there are such a large number of people that are up and moving about at that hour of the morning it is difficult to comprehend. All of them it seems are most conscious of their health, for they all seem to be either on a brisk walk, or something more adventurous like a gym, substituted by the pathway of the road that embraces the Arabian Sea ..
And soon after .. it was back to the action work on the sets of ‘Bbuddah’. It is written that man shall earn his bread through hard work and women to bear child in pain. The work is the adrenalin, the power, the motivator for all that encompasses us in our little world. Without work we would all be lethargic, restless and bored beyond thinking that now it is time for our grandchildren to take over, look after us and for us, to lead a retired life. But that does not decidedly interest me or those that come under our family umbrella.
Abhishek leaves for Russia tonight for the shoot of ‘Players’ - a film that has taken him to the extremes of the hemisphere. It was New Zealand not so long ago and now from one end to the other, in Russia. He flies in to St Petersburg on the northern fringe of erstwhile Soviet Union, a city that has fascinated me no end. It is one of my most favored places. Its structures, its ambience and its people such a delight, to be in their company.Yes it is largely influenced by Italian architecture and has followed civic planning and structure through to an extreme of beauty and relevance. The Hermitage Museum is a delight to watch and visit, even if there is a limited time limit to it. But what is fascinating is the period of the White Nights, when for a certain number of days the parabolic movement of the sun, brings on days which remain days. There are no nights - the curvature of the earth and the presence of the sun and moon determine such phenomena . But the beauty of this natures blessing is that the city never sleeps during these nights of white. They are all in the streets, laughing and enjoying this unique feature and bringing in happiness and joy all around.
Another poignant feature that I visited when I was there was the monument in memory of all those young soldiers that laid down their lives for the country and in particular for the city they so loved, to protect it from being overcome by the Nazi Germans during WW II. The Russians have many things to be proud of, but by far the most distinguishable aspect is that, they never gave in to any invasion. And the way they protected their land was most unique too. Napoleon landed up in Moscow to find that the city hade been evacuated. He had nothing to conquer and had come out so far without proper provision that the deliberate delay on the part of the Russians, brought Napoleon’s troops in battle with the harsh winter. The Russians in panzer like moves dug deep away, away from comfort, attacked the German lines as they struggled in the winter, breaking their supply lines and causing the Russian troops a psychological victory, eventually turning the tide of the Nazi war. And one of the most heart breaking stories that come out from St Petersburg is that that is a certain age group of men that does not exist in the land. Its the age group between 17 and 20 years. They were the men fighting for their country and they all sacrificed their lives for that cause. It was Stalingrad until recently, and it became St Petersburg. But that honorable sacrifice is remembered by that memorial on the outskirts of the city, where through immense fighting and defense they were able to stop and push back the force of the mighty Germans. I had been there in 1985 and found the people there much happier than what I had comparatively seen in say Moscow. I have no credible answer for this.
How the memories of days gone by and the encounters that we have with them, stays with us for years to come.
Good night dearest EF … more tomorrow …
Amitabh Bachchan
Posted by Mahendra at 2:54 AM 1 comment: