Jalsa , Mumbai            Jan  20/21,  2012        Fri/Sat 1 : 32 AM
I have finally discovered the joys of being pampered by a pedicure and a manicure. I have finally discovered why the ladies spend half their lives in the parlor. I have finally discovered what an idiot I was in not succumbing to the luxury of pretty ladies looking after your feet and hands while you comfortably watch the Australian Open Tournament. And I have finally discovered what a fine art it is to get your nails in shape. All my misgivings far far away from reality. And so shall they remain.
Off again to Gujarat tomorrow and into the second phase of the tourism campaign, which I must admit has turned out to be a magnificent success. The growth rate in tourism in Gujarat has been bigger and larger than the Government of India campaign Incredible India and that has made all those of us that were involved in the working of it, very proud. All those that criticized, all those that raised objectionable content against me, all laid to rest. It is satisfying to see how the work you put in succeeds, but even more so when it succeeds despite heavy apprehensive motivations. It is not in order to talk about achievements. Achievements have a habit of talking themselves, so one shall not rub in the moment. But one cannot but lament the expense of such negativity, the energy wasted and the destruction of all the positive forces within. Its futility is a heavy price to pay. Better then to wait for results before pulling out the sword from the scabbard.
Nikhat Kazmi a generous film critic from the Times of India stable, has passed away after a long struggle with cancer. A buoyant demeanor and a genuine lover of film, she was never too harsh in her assessments and comment. She was also rather liberal with the stars that she assigned to the ratings of the films released and in general was a much loved person in the community. Our prayers and condolences.

Many readers and followers of stars and their fans, many non interested watchers, general public, have wondered why celebrities when photographed in their cars entering or leaving a venue or event, have such peculiar looks on their faces. Well the reason is the above ! The media blocks your vehicle, does not allow it to move, flashes the daylights out of you with their multiple cameras, and if you dare touch them while driving out, which you can well imagine would require some dextrous skills, they would create mayhem and their channels would only run that portion where the ‘journalist was manhandled’.

And Filmfare wishes to acknowledge two personalities that have contributed greatly to our Industry and they talk to me about them because I shall not be able to be at the function. It is a Lifetime Achievement Award for the music duo and the masters in their craft Laxmikant Pyarelal — Laxmi ji we have sadly lost. The other is for my very first leading lady Aruna Irani, a fine and most accomplished artist in any field of performance, one that began her career in the most humble beginnings and worked her way up to glory and fame. So proud of them all and the fact that they be honored thus.
Good night dearest ones .. will attempt to connect from the regions of Gujarat in the next days and fervently hoping that I am able to get internet connections in the remote areas that we plan to visit. I shall be such a lost soul if I did not …
Love
Amitabh Bachchan
Posted by Mahendra at 8:48 PM No comments:

Fashion of 1970s is back Amitabh Bachchan 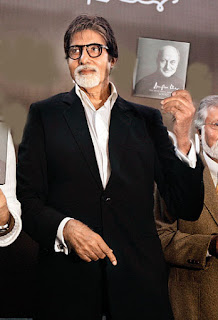 Fashion of 1970s is back: Amitabh Bachchan


At 69, megastar Amitabh Bachchan makes quite a style icon with his designer jackets, suits, sherwanis, kurtas and sometimes, also his casual look! But he senses that the fashion world of 1970s is making a big comeback nowadays.

"They say fashion repeats itself after some years, so if you have saved some of the clothes of the 1970s, it is very likely that in a couple of years, spending for new latest designs would not be necessary," Amitabh posted on his blog bigb.bigadda.com.

A style icon of his times, the tall and handsome actor, who used to wear bell bottoms, says he let go of some of his belongings of the era, sometime back.

"I threw away an entire bunch of my old sunglasses and the kids could have killed me for it! They are all back in fashion again," he added.

One with a liking for sunglasses and spectacles, Big B says he misses the shades he wore in the 1978 movie " Don".

"I met some friends of this generation at a social evening and they asked me where I had got those tinted glares I wore in 'Don'. I told them they were my personal. They yippied and yupped about it, until I told them I had thrown them away," wrote the actor, who still has a penchant for eyewear.

Posted by Mahendra at 8:18 AM No comments:

As I scan through the comments of the Blog today