A collage !! Moments of my existence 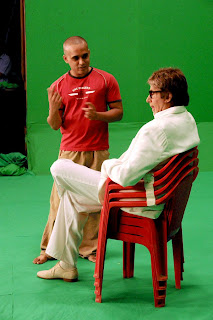 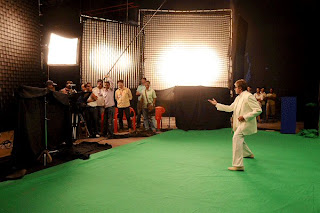 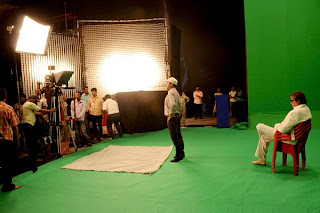 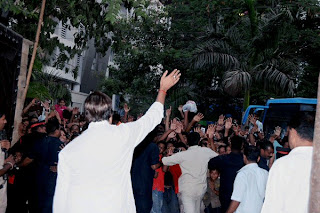 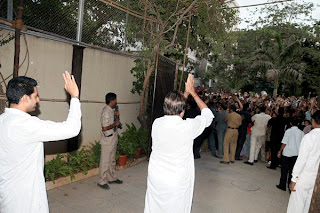 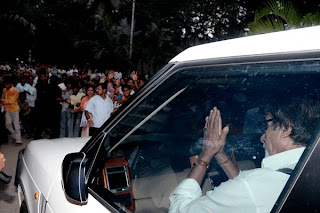 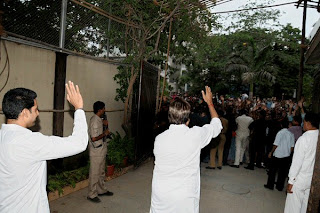 A collage !! Moments of my existence !! And, a wonder if they be of any interest within the extended family !!

The crowd of fans and well wishers outside Jalsa a few Sundays ago and their love and affection day after day through many years now. I can but acknowledge them only and express gratitude. I have nothing more with me to give them. I wish I had.

I took Abhishek out too with me. At times when the ladies are in I insist they come out and meet the people. A glimpse a wave a smile is all they ask. At times an autograph. Simple little gestures, for so much warmth from them.

And as I leave the house they remain outside and cheer and follow at times somewhat precariously perched, like the young lady behind her van. God has been very kind to me.

Some other pictures down the line show me at work for a commercial. All the green is the background which in modern film technology shall with digital finesse, fill up with visuals. I fool around in one. The crew on set seems to enjoy my humor. I sit on one pensive as the camera department lights up and focuses - the assistant on his heals to give a height indication for the lens. The director of the day in one, explaining the shot. My perch on several chairs put together to protect my bad back. I am obviously so deeply interested in what he directs towards me !! Ha ! Do not, I implore, judge my involvement in the way I look away !! Sometimes those are the moments when you are concentrating the most.

The rain… behaved !! It poured throughout the night and in bits and pieces during the day. The water logging cleared up a bit in some regions. Leakages and threats of being submerged looked distant and the traffic and life on the roads came back to life, though not entirely in other parts of the city.

I got adventurous during the day and actually supervised the breach in the wall of the basement with some serious looking technicians. And more wonder of wonders, actually accepted some of the ideas on water proofing that I gave out to them. Well.. at least they seemed to give me that impression while I spoke to them. They must really be sniggering now, at my stupidity !

The media was amusing today. Had some frantic text messages from them on whether I had built a ramp in the house to put my cars on it to save them from the flooding !! Why on earth this should be of any national interest intrigues me. I suspect they must be doing a larger piece on the inadequate facilities during the rains by the Government and the efforts that need to be made in insuring these episodes do not repeat themselves. But to be fair, what can one do against natures fury. When you have 160 mm of rain in a couple of hours, the best and most efficient administration in the world would be helpless. I have seen many a Government in the developed world brought to their knees when natures catastrophes strike ! And I must say when I had ventured out in wading waters yesterday, there was a determined presence of the police and emergency services at vantage points to bring in assistance and help.

So… I indulged again as I prepare to depart. TIMES NOW, the TV Channel anchored by the affable Arnab Goswami, who had been most impressive in his coverage and reporting during the attack on Mumbai, had done a program on me called 'Total Recall', an assimilation of 40 years of my work in cinema, interspersed with an interview. I had not had the opportunity to see it when it was broadcast and had asked for the tapes to be sent to me. That is what I put on and my immediate thought was how can I put this across for the EF to view.

So… this is not my poll question of the day, but a genuine request. How in heavens name does one get this across on the blog. To be more specific. I have 2 DVD's of the program and I suppose they will be technically proficient to go on to the net… but how does one do that..??? Some quick suggestions please !! Or else I shall go to the server bigadda.com for assistance !!

Bastille Day, the day of the great French Revolution, France, Paris and the ceremonial parade down the exquisite Champs-Elysee. For the first time in the history of the country and the parade a foreign dignitary invited as a guest of honor - our Prime Minister, Dr Manmohan Singh. And Indian troops, the Maratha Light Infantry and the Navy and Air Force, marched down along with French troops down this historic path, day before. A million Indian soldiers had fought in World War 1 on French soil and 100,000 had died. Not to mention the approximately 2.5 million Indian soldiers that fought along with the Allies during WW 2.

Felt terribly proud on seeing President Sarkozy welcoming us and giving us this honor. He, as you may know was the chief guest at our Republic Day Parade in New Delhi at India Gate, last year.

What a moment ! So many sacrificed their lives so we could live ! And we never seem to remember and honor them enough !!