Place in the history and annals of Indian Cinema BigB 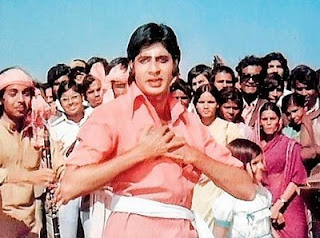 There were some more episodes of oxygen intake yesterday. The whole business of trust and the merry band of brothers overtook us for most of the while yesterday and somehow O2 did not find relative space within those confines. But it was a fascinating little walk down a small pebbled street, where thank fully no traffic was allowed. The edge of the road where this quiet lane began housed a most magnificent temple. It was spotlessly clean, had great carvings that reminded one of the carvings on temples in Southern India and there was hardly anyone in there. We stood outside, said a soft prayer and strolled down for a bit. The odd Indian that came by, waved a recognition, did not intrude and walked on. The discipline of the country infiltrates everyone, even the visitor.

A slow gentle drive followed thereafter around some of the more prominent locations. It was getting into the early part of the night and the lights of this metropolis from every floor and corner lit up the magnificence of modern architecture. Now and then early Singapore swung by - narrow lanes, old styled houses and commercial outlets, still maintained as they were, during the time of the British and maintained with great care. Wonderful to see the past kept alive.

Time constraints and urgent endorsement commitments have caught up with me and I had to ask them to adjust something here if not too inconvenient. Happily they have and we went into a huddle to discuss the commercial and the details of how when where and why. Commercial shoots have a world of their own . A five minute sequence for film would at times take half a day on set. But a 30 sec commercial could at times take more than a day to capture. Its the detailing and the eye on perfection that makes it count for these very sincere professionals and I have often admired the efficiency and the thought process that goes in to make a successful presentation.

This one is for Max New York Life the Insurance Company. They launch Max Vijay, a concept quite unique and fresh in this domain - retail insurance. It defies the conventional sale agenda of most insurance companies, where all sales are provoked and executed through agents. This Vijay is trying to instill the concept of the common man walking across to the street corner store and being able to buy your deal individually, through a process that gets over in minutes apparently. A concept where even if you missed your installment the policy does not die.

So in order that everything goes well the team has arrived from across the Bay and have set up a board room meeting to inform me of the creative. It is a bit daunting to walk in to a regular office like set up. Large conference table, chairs, writing pads, pens to scribble with, the plastic bottle of aqua, large drawing board, and very officious looking ladies and gentlemen with files of paper and laptops, almost anticipating the President to walk in and discuss an issue of grave international importance. They look at you with some reverence as they put you at the head of the table and systematically take you through the 'four lines' that have to be spoken or enacted. Its not the brevity of the creative that astonishes you, it is the amount of labor and work that has been constructed to make sure that within this brevity, the product comes out the winner. Discussions abound, camera angles, dress, tone of voice, meaning, properties… everything to the last detail. It has been always for me an exercise that I have admired. I love the professionalism that goes with it, the sincerity of effort and the energy to project 30 seconds of merchandise for a billion people.

And I am aware that tomorrow when we shall get down to shooting the advertisement, the actual process of delivering the lines will not take more than a few minutes, but the process will envelope a good 6-7 hours. Each hair in place, each leaf on the plant in frame, every little action by the actor, the speed of speech, the walk, the way we sit, the expression on the face, the correctness of each word, shall all be meticulously studied and debated and discussed by an entire panel of 5 or 6 concerned individuals, sitting in a semi circular arena by the monitor, until a unanimous verdict is obtained. This could come after a few hundred retakes !! Well not all the time, but certainly never in a single take even if all went well.

For cinema artists that rely a great deal on a spur of the moment delivery, a mood caught quite by accident because the time was right, or it just happened, the process shall not suffice when at an add., shoot. The repetition to achieve perfection is so intense that it could tire you out to such an extent that by the time you have given your 112th retake, you have forgotten your own name !!

But still nothing to take away from the effort of the team. It is a phenomenal experience and one that I believe comes from some of the most intelligent minds in the business. Their study of the pulse of the nation or the ingredients they require to capture their buying imagination is a remarkable marketing skill. It is no wonder then that many, indeed almost all film makers in today's world, deploy the services of Advertising Agencies for the furtherance of their products. And it is no wonder then that many from the Advertising world cross over into the world of film making and prove their worth.

…….. and a host of young and old, bursting through the doors of creativity, for a place in the history and annals of Indian Cinema..

May God bless them ..

Posted by Mahendra at 8:14 AM No comments: