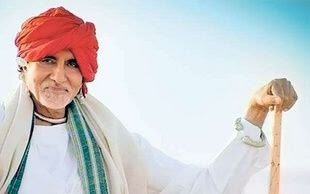 Amitabh Bachchan gets smitten by Gujarat's beauty, while shooting for Gujarat State Tourism department, in order to promote Gujarat as a tourist destination. A family visit to Dhordo in Kutch in the month of December is a proof of the same.

Yes, there seems to all possibilities that, the Bachchans, Amitabh, Abhishek, Aishwariya Rai and Jaya, are planning to pay a visit to the white land during 'Sharadotsav' in December.

As of now, Amitabh Bachchan will be visiting Saputara, for the third phase of his ad shoot for Gujarat Tourism. Sources in the state government said, "Out of seven ad films, which have time duration of 1 minute each, three films are already made and released, three films are under production and the last will be shot at Saputara, the only hill station of Gujarat located in the Dangs.

Inclusion of tourist destinations such as Rani ki Vav in Patan and Buddhist heritage site at Vadnagar are also being considered for the last ad shoot."

The official further said, "The state government will have to shell out nearly Rs 3 crore towards production of these ad films, which will be made by O&M advertising company. O&M will also be charging an additional amount of Rs 1.2 crore as fees for its creative consultancy."

However, despite the ongoing ad shoot of Amitabh Bachchan for Gujarat Tourism department, it is believed to be one of the lowest priced ad shoots. The reason is that, Bachchan is not charging a single penny as his fees. "Generally, he charges Rs 1 crore per day for ads.

However, having the country's most popular star, as a brand ambassador, could have cost the state government dearly. But the superstar refrained from charging a single penny as fee, to the state government, which is a great achievement on the part of Gujarat Government. Bachchan has already devoted 13 days for the ad shoot for Gujarat Tourism ," clarified Vipul Mitra, secretary for Gujarat Tourism department.

Posted by Mahendra at 7:09 AM No comments:

Police in action Big B on blogger harassing him 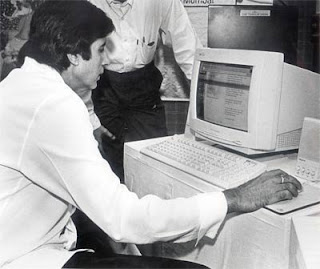 Police in action: Big B on blogger harassing him

Mumbai, Aug 30 (IANS) Bollywood megastar Amitabh Bachchan, who filed a police complaint against an unknown person who had been sending derogatory and abusive messages on his blog and mobile phone, revealed Monday that the police is investigating the matter.

"The Police has been informed of this grave and insidious act and many of the level of commissioner and equal rank who are personal friends have been wanting to seek more information, have been incensed and are in action.

"Soon there shall be a sharing of details, not just in India but in the country of its origin," Bachchan posted on his blog.

Ever since the news was made public Sunday, the 67-year-old received many supportive messages from friends and well-wishers.

"The media picked up our blog of yesterday (Saturday) and spread it out into the world of information and now for the entire day there has been a barrage of messages of support, of wanting to catch the culprits and take them to task, of grave indignation and of being incensed by this show of absolute garbage that has been directed towards me," he wrote.

The actor said he will never spare anyone who talks ill about his family.

"There is a limit to which this can be tolerated. I can be a gentleman up to a point. But beyond that I shall stop being one. You go to the level of so much as touching my family and little innocent grand children and you shall have to pay extremely dearly," he posted.

Posted by Mahendra at 7:02 AM No comments:

New Delhi, Aug 29 (IANS) Amitabh Bachchan says an unknown person has been sending derogatory and abusive material on his blog and mobile phone. After enduring it for months, he has filed a police complaint.


"There is a serious effort by a member that writes and comments on this blog to use language and expression that is abusive, filthy and utterly disgusting," Big B wrote on his bigb.bigadda.com.

"I have brought this to the notice of the authorities and (sought) corrective measures to see none of the stuff that comes from this foul mouthed individual shall ever be allowed on this platform. Any further attempt from this person shall now be under legal cyber space action, now very prominently activated in the country.

"This blog, this platform, this home for our extended family members is a sacred and revered destination and any attempt to defile it shall be dealt with in the most severe manner," he added.

Amitabh further revealed he is also receiving derogatory messages on his phone.

"Further more. This individual has been sending me the most unprintable abuse on SMS on my phone. I have, after great tolerance for months, reported the matter to the police and they will be taking serious punitive action, not just in my country but in the country of the origin of these missives."

Posted by Mahendra at 4:54 AM No comments: