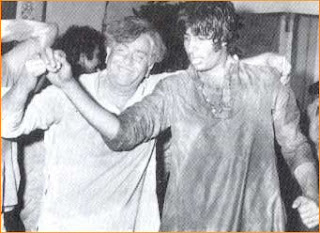 "Abhishek and Aishwarya have flown in just this evening after hectic and tiring procedures being conducted for the promotions on 'Raavan', and it was such a delight to be all together again. Took them out to dinner, caught up on events and times, laughed, went back on time when Abhishek and Shweta were little kids.

"Narrated to the 'bahu' (Aishwarya), the brattish antics of her husband when he was small, when in walked Rishi and Neetu Kapoor for dinner at the same restaurant. We talk of old times, of the numerous fun times had on the sets of the films we did together, both with Rishi and Neetu," Amitabh posted on his blog.

Amitabh teamed up with Rishi in hits like "Naseeb", "Amar Akbar Anthony" and "Coolie" and with Neetu he featured in films like "Parvarish" and "The Great Gambler".

Apart from being colleagues, Bachchans and Kapoors are relatives too. Amitabh's daughter Shweta is married to Rishi's nephew Nikhil Nanda.

"They are now my relatives - Rishi's sister's son is married to my daughter Shweta. We compliment them on Ranbir and his latest release 'Raajneeti', they compliment us on Abhishek and 'Raavan'," he wrote.

Twitter Blog
Posted by Mahendra at 7:54 AM No comments: