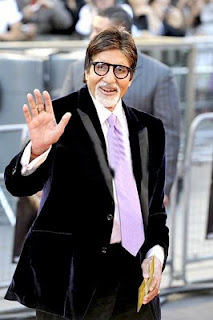 Jalsa , Mumbai          Sept 11,  2011         Sun  8:15 PM
Its a lazy day. But one that comes but once in a while … like a couple of months. And what does one do .. clean up the desk, watch sports, fill up twitter and write an early post so one can rest early for tomorrow’s first day shoot for Ram Gopal varma’s ‘Department’. Yup ! Doing a small appearance for a few days in the film. And yes I do know that many would say what is with small appearances these days. But that is what it is all about. Sometimes you do take decisions for the sake of relationships and the joy of being involved with a project because you wish to. So there. Earlier today the Economic Times wished to know a few thoughts based on similar sentiment and I said this -
My participation in Baz Luhrmann’s film ‘The Great Gatsby’ is a mere one scene appearance as a friendly gesture. Baz Luhrmann during his private visit to India last year, had dropped by my office to meet me and presented me with some paintings of a prominent painter that was accompanying him. He called last month and wondered if I would do this small role in his film and I agreed. It is a gesture. I have refused any remuneration on this too.
As to why Baz chose to ask me, is something that perhaps he would be better placed to answer. I have gone down to Sydney and had a preliminary reading of the script with the entire cast and done hair makeup costume rehearsals. It has been a wonderful experience to be a part of their system and to observe with what detail and diligence they work.
The West and in particular Hollywood is of course aware of the Indian Film Industry. Whether this little presence of mine is designed to open up ‘flood gates for more actors and collaborations’, would be utterly presumptuous by any reckoning on my part. I would imagine if and when there is a need in their stories for someone from India to be tapped they shall do so ; you have rightly observed some of the artists from here that have.
Whether the presence of Indian actors in Hollywood films shall bring worldwide acceptance for our actors remains to be seen. I do believe that this phenomenon already exists. Indian actors are a recognizable force outside Indian shores as well. I may be wrong in my assessment here, but it has been statistically proven that a larger number of the world population watches Indian movies as opposed to Hollywood – 3.8 billion to 3.2 billion. Indian films have been a significant part of the lives of various countries, prominently in regions that have hitherto remained unknown or unaccounted for –the entire North African belt from Morocco to Egypt down to Kenya, South Africa, Mauritius and the East African coast to Nigeria and many central African nations, the Middle East, Far East, Russia and now China, Japan and Korea as well, not to mention the traditional USA, UK and Europe markets where a large percentage of our expatriates reside.
Stars from India getting global celebrity managers is an individual decision. Perhaps you are unaware, but many already do. Hollywood is a richer entity and has the advantage of a more universal language, but there are several examples that I have been personally witness to, where the Indian star, with all due respect, has garnered greater notice than his Hollywood counterpart.
At the end of the day we must remember a most basic fact. We are the Indian film Industry and they Hollywood from America. There shall always be a prominence to American actors in Hollywood, just as there is a prominence of Indian actors in Indian films. A ShahRukh, Salman or Aamir may well be an unknown face in one of the towns in Mid West USA, but so would a Brad Pitt or Tom Cruise in Yevatmal or Giridih. How many foreign stars have you noticed gaining prominence in Hollywood apart from that odd Omar Sharif, Jackie Chan or Bruce Lee ? Even British artists, which really should be considered, nation wise, as individuals from the same community, have a limited presence. And how many Hollywood stars do we see in our films ? Forget Hollywood, even artists from regional cinema in India have a rare presence in our own films – Hindi film artists in Tamil, Telugu, Kannada, Malayalam or Bengali films and vice versa.
What would you think … makes sense ..?
Love to all ..
Amitabh Bachchan
Posted by Mahendra at 1:48 AM No comments:

Jalsa , Mumbai      Sept 10/11 , 2011           Sat/ Sun  2 : 10 AM
Yes it is late … but having just finished my work at KBC and devoured a meal, have realized that time has indeed flown by and it is time that I should have been in bed. But … that is a hope. Nothing goes to sleep until the EF have been connected with and with whom is shared the thought for the day.
I am afraid there is not much that can be said after my time spent among the ‘bleeding hearts’ on this wonderful programme. Today was the episode played out to help and assist in any manner possible, those of our country that have had to face personal tragedy and are now in desperate state.
Tonight was the lady who’s husband a farmer in the Vidarbha region, committed suicide because he was unable to repay his loan. Suicides in this region have reached alarming proportions. There are so many of them that are resorting to this form of ending their lives because they are unable to repay their loans and are unable to find a remunerative medium in their business of farming to earn and pay off these amounts. They leave behind a family. They have taken the easy and cowardly way out. But they are gone and they have left behind a whole lot of people that now face the consequences of their absence.
Aparna, the lady who came by for the KBC contest as a special guest has two small daughters aged 7 and 3 and no support from any quarter. Her husband committed suicide to save the embarrassment of not being able to pay back his loan. Aparna now is left all alone. She was not even aware that her husband had taken a loan. She has gathered herself together somehow, and works on the fields in farming and making ends meet. She still keeps her ‘mangalsutra’ on her neck - the necklace worn by Indian women signifying her married status, because she fears harassment from other men, who trouble her with threats and envious motives. But she is resolved. She does not want to give up. She will fight her way through she says, bring up her children, earn her living through the hard work on the fields, build a concrete house, for the present one is weak and old and made of mud and broken tiles and give half of what she earns to the other widows in India, who she says are suffering with similar conditions … just incredible !!
She won Rs 6, 40,000 ! She will clear her loan of Rs 50,000 and shall perhaps repair her home and keep some money aside for the education of her two girls.
I did not have words to be able to express my anguish and grief at this state. But there it was. Stark, brutal and honest.
More of this later .. I fear I shall drop if I continued further .. so till then then ..
Amitabh Bachchan
Posted by Mahendra at 1:47 AM 1 comment: