Posted by Mahendra at 7:20 AM No comments:

Flattery can stir me up as much as criticism if I take it to heart ! BigB 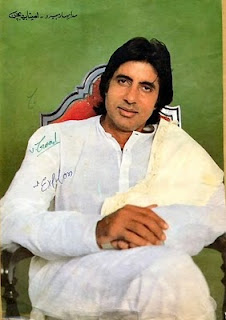 Flattery can stir me up as much as criticism if I take it to heart ! BigB
Jalsa , Mumbai     Mar 18 , 2011  Fri  11 : 45 PM
I sat down to write this around 10:30 Pm and am finally getting down to it around midnight ! Reason ? Once you open the net you just keep spending idle time in visiting a number of sites without any purpose or meaning. And then you suddenly realize that the real value of it is here amongst all the FmXt and you revert back … but by then its past midnight !!
Just an observation … nothing more !!
An entire day has gone by in the look test for the film ‘Bbuddah’ and finally by late evening the finals were approved and locked. Soon and with the permission of the directorial crew we shall be giving you a sneak preview of it ! Its tough going through all that we do in the making of film, and at an age when the 7 and the 0, ie 70 loom large before you shortly, you wonder whether one is doing the right thing or not ! Anyway ! Its too late for that now ! Once in then in .. get into it and give it your best shot !!
“Next time I will … ”
“From tomorrow on I will ….”
- what makes me think I am wiser today than I will be tomorrow !!!
Brilliant thought that I picked up in a book. So apt and appropriate in our today’s life. Truly, what does compel me to think that I shall be wiser today than tomorrow. Its the process of delayed commitment. A lazy response in desiring to delay, to postpone, to not having to deal with it today … to somehow push it to a later date, because quite frankly, either I really do not have the answer to this today or its an ailment within us of not wanting to confront. And many expressions and books and famous sayings from eminent personalities have confirmed this in their own manner. There are many among us that simply hate the idea of confrontation. Even when they are on a course that threatens to be right. Conversely there are others that absolutely thrive on this situation. They are built differently. They need to face the oppressor, the one that is with fault or the one with whom there is and shall be disagreement ! And until the issue at hand is not resolved in their favor, it will continue to be dealt with until the other simply vanishes through defeat, or admits fault merely to get over the situation. But even after the ‘battle’ has been lost and won, the victor generally continues with the confrontation. It displays to me a desire to be heard and obeyed, to be acknowledged of their power of authority, than wanting to actually resolve the issue. For such people, I would strongly recommend silence and withdrawal. I can argue with someone of sanity. But how does one tackle a fool.
Falling into the trap shall only jeopardize and endanger our own selves, harm ourselves than bring any kind of result or conclusion. The other may be foolishness personified, but why should I test myself on his account. Would it not also reduce me to their level ?
So …. ek chup sau sukh  !!
‘Flattery can stir me up as much as criticism - if I take it to heart ! ‘
I would rather be in assessment of my own worth than fall prey to compliments. If I shall possess the ability to gauge my own work, surely I shall be in a superior state. This is not to demolish the keenness with which the compliment giver gives and the compliment taker takes. That process has its own merit and standing and respect. And it must never be asked to be detached or left rudderless. After all the entire process of creation is built on that very sound platform of, desire for recognition. Now after it has come to one in abundance, to dispel it would only make you a very unattractive and disliked individual. But, after the final result, surely one must in his own individual capacity, be able to decipher where things have gone horribly wrong and where right ! And if I did not possess the ability to be able to understand this, then there really is no immediate need to even indulge in this conversation.
‘The artist must satisfy his own soul. All you can lose is your reputation.”
And with that to think and mull over …I shall take leave ..
Amitabh Bachchan
Posted by Mahendra at 5:44 AM No comments: