Amitabh Bachchan was so overwhelmed with the kind of response his latest release, Bbuddha... Hoga Tera Baap, has recieved that he got nostalgic.

Posted by Mahendra at 4:58 AM No comments: 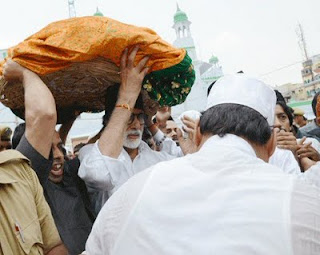 40 years ago in Ajmer Shariff to untie the ‘dhaga the scared thread that one ties at the shrine BigB
Jaipur , Rajasthan    July 4/5,  2011      Mon/Tue  12: 13 AM
In prayer and in peace … in divinity and the unknown force … in the completion of a promise made 40 years ago .. in Ajmer Shariff to untie the ‘dhaga’ .. the scared thread that one ties at the shrine. I had visited the ‘dargah’ soon after my entry in 1969 made a wish and tied a thread. The belief is that when the wish is fulfilled, you return to the shrine and untie a thread, any thread. It is not possible for you to remember which one you had tied, for there are millions of them. So the custom is that you tie one and open any other as a gesture of completion. I had been wanting to visit the holy place for sometime, but day before suddenly things worked out and here I am.
The Ajmer Shariff has a great history going back almost to the years in the 11th or 12th century. Of a Sufi saint that came here and spread the word of peace and well being. Of the great Moghul King Akbar, having walked barefoot for the blessings for his son and many more such interesting stories. The power of divinity has no end and no explanation, we simply follow and we simply believe. When the call comes we follow and get drawn. It took me 40 years to come back here again. But I am relieved today that I came and was able to fulfill what I had vouched for.
The media and the electronic went along with me. We talked with Star and their valued anchor Deepak Chaurasia. The two and half hour drive along lovely clean and smooth four lane highway, a dream almost, went by without much notice. The entrance is narrow and congested ; most places of worship in India are, and the crowds passionate warm and full of excitement. The home security along with the local police had a tough time controlling the moment, but all went well. The prayer was made, the thread was untied, a fresh one put in again for another future visit and the electronic ran several news programs on it for the rest of the day ! Sometimes the sanctity and peace that one searches at moments like these gets destroyed by the intrusions. But that is and shall always be the case. 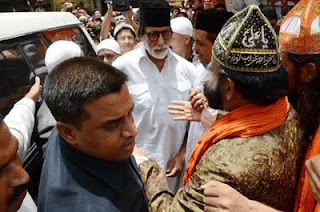 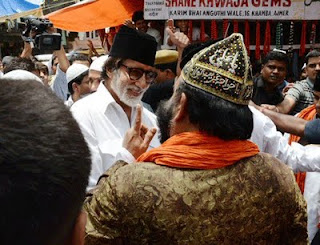 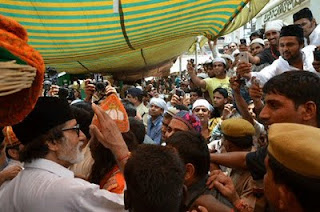 That is me in the pink scarf around the head … tied by the respected inside the shrine and those that conduct the ceremonies inside .. 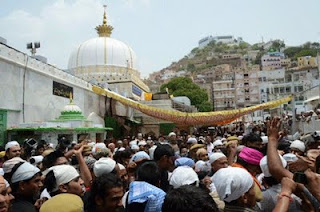 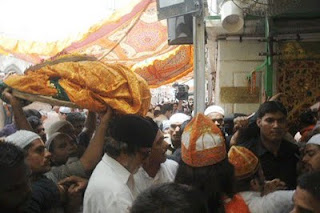 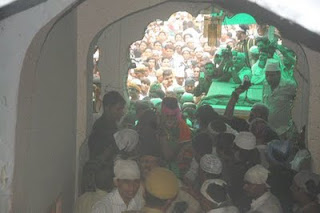 Many wanted to know what the ‘mannat’ was that I had initiated .. I felt that was a bit ambitious of them ! And when they did not get a response they made their own.

‘Its for the grandson that he had asked for !’
That is a big laugh ! 40 years ago I was not even married. Ha ha ! So what ..? I would come here to ask for a grandson even when the thought of finding my partner to produce a son had not entered my mind ??
Some people are so devoid of common sense ! So when that attempt failed they conjectured several other and more … without any meaning of course ..
This entire region is so full of history and design and culture. This region faced all the intrusions and attacks from foreign powers that crossed over to capture and rule, during the early centuries. Steeped as it is with deep traditions, geographically it provided that natural terrain to deter the enemy. All the palaces and forts and monuments that housed those that ruled here before the invasions, still reflect the thought that went into building what they did build and why. It would make a most interesting study.
I return tomorrow back to base and on to the next - ‘Aarakshan’. Preparation for its promotions and publicity is kicking off tomorrow and soon you shall all be getting information on how that goes ..
Some of the messages that keep coming in ask many queries, some put up valid reasoning and argument .. what is the exact purpose of your visit to the shrine and so on ..
During the drive to the sacred location, my tv anchor does agree that sensationalism is defeating the purpose of dignified reportage. The medium of Tv is so strong and impressionable that the necessary care that is required, gets overlooked many a time. Competition prompts one to perform in manner known, so that the other does not get away with an exclusive, resulting in hasty presentations, breaking news and definitive analysis, when in fact the subject may have required more time to find fact and to research. But with over 400 hundred channels in operation and another 1000 applications pending with the authorities, one wonders if there shall ever be any care or time for studied authentication of fact. If the channels are in such numbers the basic truth of operation is who can get what out faster than the other. Or be in a situation where they could say ‘you heard it first on our channel’ ..
Interesting times are ahead ..
Posted by Mahendra at 4:15 AM No comments: