Amitabh slams Bhandarkar allegations on Aishwarya Rai
Aishwarya Rai Bachchan's pregnancy has raised more controversies than happiness inside the industry. While some are rejoicing on the news, a few are discussing on the loss of Madhur Bhandarkar on the film Heroine. However, everything was fine till Bhandarkar himself came ahead to says that Aishwarya hid her pregnancy from them.
Meanwhile, Bachchans are upset with rumours on Bhandarkar's 18 crores loss on Heroine being shelved. Responding to all the reports Amitabh Bachchan justified on his way back from Ajmer Dargah on Monday, Whatever has happened between Aishwarya, Madhur (Bhandarkar, co-producer) and UTV (co-producer) is between them. I know that the rumours going around are not true. I hope that the truth comes out soon.
Slamming all the rumours about the monetary loss, the Bbuddah star told that everybody knew that Aishwarya was married when she signed the film. So you mean to say that actors cant get married or have children? I dont think this can be a part of any contract that you cannot get married or have children if you are working in a project, reasoned Mr Bachchan.
Amitabh is also upset with the UTV banner and talked about his film Shoe Bite with them, which has not yet been released. He expressed that he has not even asked a word on why the film has not been released yet. Though actress Aishwarya refrains to react on Bhandarkar's allegation, DNA reports that the actress has not accepted any compensation for Heroine. Bachchans, on the other hand, are not in favour of suing Madhur over his remarks. 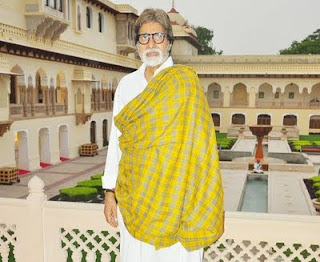 What did I do today I cannot say what did I do 50 years from now clear as crystal So why does this happen BigB
Jalsa , Mumbai      July  6/7,  2011          Wed/Thu  1 : 03 AM
What did I do today … I cannot say … what did I do 50 years from now ..  clear as crystal .. So why does this happen .. I just seem to have no idea. An advertisement on Tv on some consumer product for kids, spoke up through the mother of child - ‘ the childs brain grows 90% upto the age of 5 ‘ .. I guess that answers my query .. If it has developed to its maximum by the year 5, then what the hell are we doing now … trying to increase its size. Someone else said the human uses only 33% of its brain in an entire lifetime .. so what happens to the balance 77% ?
I work to get to the 34% mark ! I joke sometimes with the media when they keep insisting on telling them the reason behind all the work I do. Its almost as though they do not want me to continue. Well .. so long as I breathe I shall work, or let us put it simply. So long as my body can tolerate me and my work, I am fine. The day it resigns itself so will I. I hope that my body is not in the same conference room, when this issue shall be discussed. I would rather it was left free. Many wonder where I ger the energy from … as if I knew … ha ha ! So putting on the best performance of your life, in front of the media, you straight- facedly answer after the product that you endorse, and that which is unknown to most … NUTRICHARGE !!
If I really knew where I was getting my energy from, would I not disclose it. And whilst I cannot take names of products, you may understand how all this works … I mean there is not anything seriously wrong, just a little banter to lighten up the atmosphere.
I had been to a film festival once before. It was held at the Vigyan Bhavan in Delhi and since then there has been this attraction of getting to see the better cinema. What really happened is between them and they all know their jobs. My interference would attract unnecessarily the wrong attitude, and strike me dead .. This Industry is complete and fulfilled. The old time director producer has long gone away and given way to those that came after to sit and think and visually commit themselves. Their thinking will rest with the thinking of today’s youth and raise issues, which thankfully I may not have. Better to not have it and regret, than to possess one such aerated water example that shall not bring in the required clientele. It could be, but surely there has been no contact. Finding a human in this city is well a most interesting serial, which should be explored for further use. Hence the days and times spent with the room empty. And what if the walls began to talk or the bed properties move about in conversation.
At a wedding recently of family friends, I could not help but notice the opulence and sobriety was able to match any of the wonders or sights in the world ..
I need a charge … perhaps a pillow or a set up to see me through .. prayers for your well being …
And so ~
Amitabh Bachchan
News BigB blog
Posted by Mahendra at 12:28 AM 1 comment: