Amitabh Bachchan
Posted by Mahendra at 3:23 AM No comments:

Bhopal , MP  Mar  2,   2011    Wed  10 : 30 PM
The day lingers on and on and on …
And when it comes to the time when the brilliance of the sun fades, giving way to the gentleness of the moon, then do the instincts of our connection bloom in great anticipation. And till the time the location and the date and time are registered for posterity at the upper enclaves of this page, there is not the slightest semblance of what the words that hopefully adorn the page now, shall be or consist of what. I continue to write and punch words in with the hope that in time i shall suddenly through some act of providence be able to gather up expression to be contained in here and now. But till then its just words and ramblings - a word that received a grave reaction from many in their responses.
Tomorrow will be the 3rd of March and there is a delegation of makers coming over to speak and react and churn ideas and content for a documentary on Indian Cinema, which they profess the Cannes Film Festival wishes to exhibit in this years celebration of International cinema. The makers as of now consist of Mr Rakyesh Mehra of Delhi 6, and Rang De Basanti fame and Mr Shekhar Kapur of Bandit Queen and Elizabeth fame, among several other associations these gentlemen have in their contributions to this marvel of the 20th Century, moving pictures !
And I often wonder why is it that they consider my offices to be of any value, as far as expressing knowledge of Indian Cinema is concerned ? It is a disposition that I have often felt and expressed with great forthrightness, in many forums both private and public. That just because one is fortunate enough to be decorated with the tag of a celebrity, through whatever mean of business - an elegant model, a composite artist, a musician, painter or writer - does not necessarily give him or her the license to express views and opinions on how the world runs, for public consumption. Suddenly a film star or champion cricketer shall be asked under threat almost, an opinion on the latest budget, presented in the august Houses of Parliament, and its repercussions on the fate of the country !! Now, with all due respects to some of the more decorated individuals in various vocations, I have serious doubts whether they shall have an opinion to give to the Finance Minister of a country on its budget requirements and the complicated process of its evaluation, put together with great judicious concern for over a billion people ! Yes they would I imagine be able to look at it in a personal capacity. See how it would directly affect them and their profession, but to give it an entire financial viewpoint, I have my doubts. At least let me not speak of the others, I would find myself in no capacity whatsoever to make any comment - financial, political or whatever !
Just because we profess to have some knowledge of cinema, does not mean that we are gifted with possessing knowledge of every other aspect of the world and its functioning ! That is absurd. And what is even worse than that, is the fact, that opinions when given, are then subjected to great amount of ridicule and criticism. Arre ! When we have confessed that we are incapable of making any comment, that the field is not within our circumference, and that despite that we have been virtually bullied into it, why then be so damning to our remark. It wasn’t meant to be there in the first place. But … the public loves to witness a ‘horse been flogged’ ! It gives them a sense of feeling that all that is wrong with the world and with their particular circumstance, is because of that particular ‘horse’. He or she is responsible for all the discomfort that mankind is going through, the reason for all their troubles. Purely because … said individual, celebrity, call it what you may, is perhaps not being affected by the financial changes or recommendations that the system is installing.
Which is why in a society of greater have nots, the haves shall always be ridden with accusation. Its the way of the world. Best to recognize it and quietly go your way. Try to fight or justify it and you are asking for trouble. Extravagance is not an appreciated metaphor in most circumstances. Great detailing and compassionate adjectives shall dominate any description of wealth, because it is a limited commodity. Its never so and so’s house. Its always so and so’s billion dollar house. Its never, his residence. Its always, his palatial residence. And so on …
There is that funny little story, all make belief of course, on the Marwari, a business community, and by far one of the richest, on how he conducts his wealth and disposition.
A Marwari running a very prosperous business in Kolkata in billions, was living in a dilapidated little one room hole, with no modern facilities or benefits. Not even an air conditioner to rid him of the oppressive heat of summer. When asked why he did not at least put in a small cooling device, he responded - ‘I don’t need it. Every night when I go to bed, I put all the bank notes in the hundreds that I have earned for the day, on my chest and go to sleep - it has the most cooling effect ever !!’
Moral of the story … if you have it, don’t flaunt it !
Love to you my dears … sleep well !

Amitabh Bachchan
ps : was I apprehensive of what I shall be able to talk about in today’s blog ? Hmm .. its suddenly gone down to 930 words. Not bad eh … for a bit of uncertainty !!
Posted by Mahendra at 3:20 AM No comments:

My goodness gracious ! Got my site back ! Thank you Lord

Bhopal , MP     Mar 1 , 2011      Tue  11 : 47 PM
Ohhh ! My goodness gracious ! Got my site back ! Thank you Lord ! Thank you Bigadda …
Pressed a button which said upgrade your page medium that you write on and by error it got pressed after I had written my blog for the day… AND … the entire site disappeared .. gone .. not available at all !!
Desperate I called the server and spoke to the technical team of bigadda and they have restored the site ! I would never have forgiven myself if it had gone for good. Now so many suggestions pouring in on how to behave with this technology. I shall follow all. I shall follow even those that are not asking me to follow. Just do not deprive me of this medium, please. Its like my entire life in there !!
Fine, so now I breathe easy ! And need to recollect what I wrote earlier. Ahhh ! never mind. I cannot remember now. I mean I can. But its not the same. The thrill of getting back my EF isbeyond explanation. Its like loosing everything. Never panicked so desperately ever before.
I had written earlier on my surprise and extreme joy in going through all the responses of the day and how a simple discussion or call it a debate could garner so many reactions. Overwhelming ! It has been a most rewarding day, one that educated me, informed me, corrected me, suggested to me. there were so many aspects that I was unaware of. And what a delight to be now in the know of it. I must continue this debate later on someday. It is indeed most interesting.
My apologies also to most of the EF that got left behind, without the yellow lines. I did make an attempt to answer all, but it was getting impossible to do so. One look in the mirror and the deteriorating red eyes and I had to make a stop.
I think what I initiated today on the fresh blog was the matter of relationships. Their status, their departure when associations break and how we seek the company of those we feel are in similar condition when distressed about it. It was pretty exhaustive, but now that it is gone, I feel not too keen to bring it up again at this juncture. When it needs reference again I shall revisit. For the moment let me just remain content with the fact that the entire site was not lost and is safe and been restored.
I need to rest now. Do excuse my early departure and some rather inane writing. I need to prepare for the 4th recital of my Father’s works. I need to rehearse. I need to get it correct. I need to do it so I can represent my legacy ably. A legacy that has been gifted to me by my Father and by his surname that I carry.
Good night dearest ones .. I almost lost all of you tonight … what a scare ..
Love and more ..
Amitabh Bachchan
Posted by Mahendra at 2:58 AM No comments: 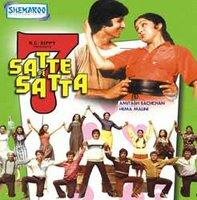 Satte Pe Satta: Part 2
If you have to name one Hindi remake that ranks even better than it's original Hollywood version, I am sure "Satte Pe Satta" would be a strong contender. Remake of "Seven Brides for Seven Brothers", Satte Pe Satta was a funny charming tale of seven brothers who run a farm together. Who can forget some of the most comic moments on screen. I, in particular, remember that one scene, where Amitabh is drunk and starts blabbing about how drinking is bad for the liver and how once at a wedding he was forced to drink 4 bottles of alcohol... then he kisses Amjad Khan! LOL. So, I was pleasantly surprised when this news broke to me that Raj N Sippy is remaking his own classic movie.
And I just can't stop thinking over who could fit into the roles played so brilliantly by Amitabh, Hema Malini, Amjad Khan and the rest comprising of Shakti Kapoor, Sachin, Paintal, Sudhir, Kanwaljeet and Ranjeeta. I guess it would be very difficult to match the chemistry and charisma of these stars.
Besides, I can't even imagine anyone coming close to R D Burman's superlative compositions like "Pyar humein kis mod pe", "Dilbar mere", "Zindagi mil ke bitayenge", "Mausam mastana", "Jhuka ke sar ko" and the title song "Duggi pe duggi ho ya satte pe satta". Raj N Sippy has a tough job at hand but it would be, nonetheless, very interesting to see how he fares in his second innings. For starters, he has approached Sanjay Dutt to step into Big B's shoes, which is a good decision. If any actor fits well in the dual role of Ravi and Babu, it's our own Munnabhai.
Posted by Mahendra at 2:31 AM No comments: