New Delhi, Aug 19 (IANS) The fifth season of ‘Kaun Banega Crorepati’ hosted by megastar Amitabh Bachchan has catapulted Sony TV to the top spot after opening at the Television Viewer Ratings (TVRs) of 5.24.


The show, which went on air Aug 15, opened with 5.24 TVRs in the three metros, taking Sony to the top spot in three metros Mumbai, New Delhi and Kolkata, according to Television Audience Measurement (TAM) ratings.


‘We are delighted with the performance of KBC. These numbers show that we have yet again touched a chord with our viewers,’ Sony Entertainment Television Business Head Sneha Rajani said in a statement.


‘The impressive opening numbers for KBC is an emphatic endorsement of our promise of delivering wholesome family entertainment,’ she added.


Amitabh emerged victorious among Dharmendra and Hrithik Roshan, whose shows ‘India’s Got Talent’ and ‘Just Dance’ opened at 4.5 TVRs and 4.0 TVRs, respectively.

Posted by Mahendra at 3:43 AM No comments:

Concern over the robbery at Anat’s house, birthday wishes for Jaishree 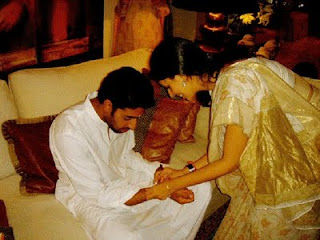 Jalsa , Mumbai      Aug  20,  2011         Fri 11 : 56 PM
Concern over the robbery at Anat’s house, birthday wishes for Jaishree and grateful thanks to Shankar for the execution of the blood bank and its success in the UAE. Also thank you Reeham for the gifts sent through Shankar …
The exhaustion of yesterday was carried forward and even though there was no shooting as such, I did have an early start due to a fresh endorsement that I had to attend - Force Motors Ltd., launched their new car, an SUV called Force 1, and I had to be there as their brand ambassador.
Its remarkable that an SUV with such high technical worth and input should be available at the most generous price of Rs 10.65 lakhs only ! This is quite an incredible proposition. I sat and drove by at the launch and it was truly great. Have ordered a couple and hopefully will be in possession of them by September after ‘Ganpati’.
Also the Supreme Court of India, the highest legal body of the country cleared the film ‘Aarakshan’ for release form areas where it had been banned, reassuring all of us and the people in general that the rule of law prevails in this country. The reasons given by the honorable justices was that once a film has been passed by the Censor Board no State or organization has the right to ban it. Which is something that we had been saying from day one. I do believe that this late clearance shall affect the collections of the film, because 11 days in the life of a film in todays time can be a lifetime. Will those that opposed the film and stopped its distribution and exhibition now compensate the producer for deliberate and illegal procedures used for harming the financials of the product ? I guess not …
Anyhow … the film has received both critical and box office acclaim and this is good. It is indeed a pity that those that opposed the film never even bothered to see the product before deriding it. Had they done so they would have realized that the film indeed is in fact pro them and their reasons for their anger is so unjustified. In fact during my conversations with Prakash Jha, he told me how the various factions that had expressed their anger and dissatisfaction over an unseen film were now asking that the script of each film be sent to them for clearance before going on the floor !! That is quite audacious ! They would have to rewrite the Constitution of this land before that can be complied with ! So in fact what it tantamounts to is that there is a suggestion of a body which shall function above the governance of the country and more, the Constitution of the land ! Nothing could be more ridiculous than this !!
The initial guess ratings for the KBC have emerged and show signs of being good. Indeed the channel says that it is now the best non fiction opening ratings of all shows on all channels. So .. a gentle cheer and a feeling of some reassurance. The shoots and recordings of the episode however continue at a vigorous pace, and the charm of meeting an exciting contestant from some part of our country, has become a moment of great expectation and desire. The cheers from the audience in the game show that come along voluntarily has been stupendous. They are a knowledged lot and most patient and accommodating. There are time delays at times dure to the rain and the electronics that fail as a result, but they remain steady and steadfast, bearing all this just to be a part of this historic game show that continues to  draw great interest even after 11 years of its initiation !!
I wish to express my gratitude to those that support the game and continue to do so year after year, season after season. Your interest generates interest in us to give it more than what our capacity may be, but when you spur us on we elate and expand and indulge. That really is the reason to keep coming back. Trust me. You make the show !!
The figure of a million and 50,000 followers on Twitter has gone by unnoticed by those that generally notice it. It is good that they feel so. I would like it it to be so - unnoticed and of little consequence. It indicates I need to do better. And I shall try !!
Love to all …
Amitabh Bachchan
Posted by Mahendra at 3:41 AM No comments: