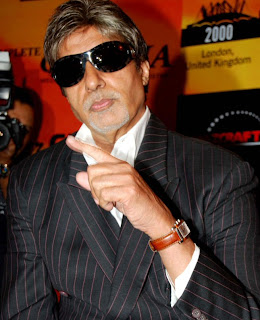 New Delhi, May 26 (IANS) Animal welfare organisation People for the Ethical Treatment of Animals (PETA) has urged members of the India International Film Academy (IIFA) and its brand ambassador, Bollywood icon Amitabh Bachchan, to avoid non-vegetarian meals at the forthcoming event to be held in Macau, China next month.

On behalf of PETA, its chief functionary Anuradha Sawhney sent a letter in this regard to Sabbas Joseph, one of the directors of Wizcraft that organises IIFA, and its vegetarian celebrity face Amitabh after learning that the event will have a 'Go-Green' theme, said a press release.

"We were thrilled to hear that this year's IIFA Awards are going to have a 'Go Green' theme, and we commend you for helping to once again draw attention to the global climate crisis. On behalf of PETA India and all our members and supporters, we respectfully ask you to serve only green (vegetarian) food at the event.

"By doing so, you will send a strong message that people can save the planet simply by changing their dietary habits," Sawhney stated in the letter sent Tuesday morning.

IIFA, in its 10th edition this year, will be held from June 11-13 at The Venetian Macau-Resort. It will also present a special 'Green IIFA' award to a film personality who has been working in the area of creating environment awareness.

IIFA has been addressing the issue of global warming since 2007 and this year too they will take their concern forward. It has been hosting an eco-friendly award function by rolling out a green carpet instead of the conventional red.

"Kicking the meat habit is the best thing that anyone can do for animals, their health and the earth," Sawhney said.