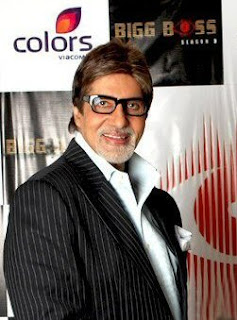 "After the tremendous success of 'Bigg Boss' last year, we want to take it to even higher levels this year - in ratings, in novelty and in appeal. With Mr. Bachchan on board, we strongly believe that ?Bigg Boss' this year has all the ingredients to surpass its last year's popularity," Kamat said in a press release.

Amitabh, 66, who created waves in the TV industry as host of superhit game show "Kaun Banega Crorepati", is making a comeback to the small screen after a gap of four years.

His role in "Bigg Boss" has been defined as that of a ?Pop Philosopher', which is a unique concept that will be one of the differentiators of this season.

In this role, Amitabh will bridge the gap between "Bigg Boss" participants and viewers through contextualising events, simplifying emotions as well as analysing developments that happen within the "Bigg Boss" house.

Talking of his association with the show, Amitabh said: "This is one show that has intrigued me immensely as a viewer - its format, its contestants and the psychological battle within the house. That intrigue, coupled with the unique concept that Colors shared with me for this season, excited me to be a part of ?Bigg Boss' this year."

It has celebrity contestants locked into a house under the surveillance of multiple cameras for a period of three months without any contact with the outside world.

In the third season of the show this year, viewers will get to decide who they want to see in the "Bigg Boss" house. Amitabh will be urging viewers through ads to send in their entries, on the basis of which a few celebrities will be approached.

The show will begin in October.