Big B gets a blast from the past in Aladin 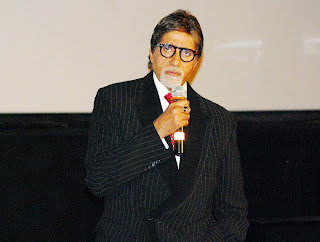 
Mumbai, Oct 12 (IANS) Filmmaker Sujoy Ghosh is such a huge fan of Amitabh Bachchan that he revisited many of the megastar's hit films, studied key scenes and dialogues and came up with his own take by presenting them in his forthcoming fantasy adventure "Aladin".

As a tribute, he wanted audiences to get a sneak peak into Amitabh's past movies and incorporated those elements into the character of Genius - The Genie that would instantly find a connect with the audiences.

"As a fan of his work, you also want him to do something that you know would keep millions of his fans and followers worldwide happy. It's a good mix and I really had fun putting it all together. As for the inspiration factor, it's for the audiences to see once the film hits the screens. I would be keen to see how they catch on and then react to it," Ghosh told IANS.

Amitabh was Ghosh's only choice when he conceptualised the character of Genius - The Genie for "Aladin". It is a known fact that Genie is set in contemporary times and the character is flashy, vibrant and not many were aware that Ghosh has extended his real life tribute to the actor on reel as well.

"When you have someone like Mr. Bachchan working with you, you naturally become a lot greedy. You want to talk to him about his work over the years, the way he approached his character and then also try to present him with a characterisation that he has never been seen in before," he said.

The director was always intrigued by the way the megastar has continued to re-invent himself over all these years.

No wonder one can already see Amitabh shaking a leg a la "Pag Ghunghroo Bandh" in "O re Saawariya" with his pink 'pagdi' and trademark white 'kurta' intact. His song "Tak dhina dhin" too has a "Jahan Teri Yeh Nazar Hai" flavour to it.

Moreover, there are also certain scenes in the film that are inspired by the Big B's old movies.