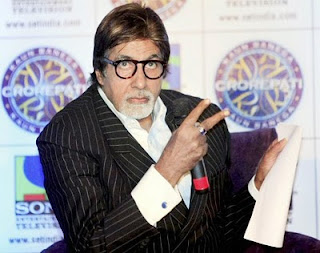 The fourth season of "Kaun Banega Crorepati" to be hosted by megastar Amitabh Bachchan will go on air from his 68th birthday on October 11.

The phone lines opened at 9 p.m. yesterday and by 10.30 p.m, the number of SMS had gone up to seven lakh... Phone calls to be compiled... the Bollywood legend said on the microblogging site Twitter.

Bachchan said, "Questions to first round of entry to the show starts today. Broadcast starts October 11. KBC lines opened at 9 p.m. and in the first 5 minutes, there were 1.5 lakh SMSs."

"This is scary. Need to get back and start rehearsing to deliver what these numbers indicate and expect," he wrote.

Incidentaly, KBC phone lines opened on August 2 which Bachchan's family members also consider as his "Happy 2nd Birthday" because he came back from the hospital on this day after he was declared "clinically dead" when he suffered grave injuries during an accident on the sets of "Coolie".

Bachchan's children Shweta and Abhishek greeted their father on the occasion.

Shweta tweeted, "family wish him coz it's the day he came home 4m hospi... every fam has a defining moment, we hve had several. The 82' incident was perhaps the most grave nd public."