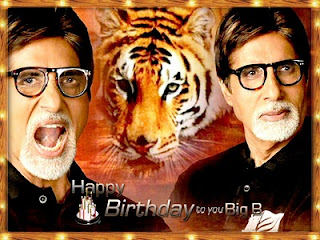 Allahabad, Oct 11 (IANS) An artist Monday celebrated megastar Amitabh Bachchan birthday in a unique way by creating 68 sand sculptures of the superstar around another 11 feet sand sculpture of the actor in this Uttar Pradesh district, which also happens to Bachchan's native place.

"I am his (Bachchan) big fan... It's just a small effort to express my feelings for the great actor, who has fans not only in India but across the globe," Chitera told reporters in Allahabad city, some 200 km from Lucknow.

"I created the sculptures on behalf of residents of Allahabad as they wanted to mark his birthday in a special way... I am quite sure that with the help of media persons, Amitji would surely come to know about the unique style in which his birthday was celebrated in his home town," he added.

It took nearly six hours for Chitera to complete the sand sculptures.

"All the 69 sculptures (including 68 sculptures each of 2 feet) are more or less same. They all depict Amitji in a cheerful mood... The megastar is smiling in all the sculptures," said Chitera, who claims he has not missed out any single movie of the superstar.

People started converging near the banks of the Ganga, since 7 a.m. when Chitera started creating the sculptures.

Later, fans of Bachchan assembled at the site in large numbers and offered prayers for his long life. During the process, the portraits were also showered with colourful flowers.

"Besides his (Bachchan) contribution, his association with Allahabad makes him very close to us... People of Allahabad feel Amitji is like a family member to them," said Viresh Shukla, a resident of Civil Lines area, who along with several others, prayed for the actor in front of his sculptures.

Pawan Kumar, a student of Allahabad University, who was also present at the site said: "Amitabh Bachchan is a role model for many. It's been a long time since he (Bachchan) visited his home town. I hope Chitera's work would serve as an invitation for the superstar and he visits his hometown soon."