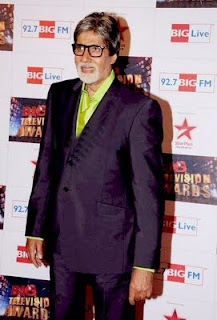 Mumbai, June 15 Bollywood megastar Amitabh Bachchan was named the most distinguished personality of 2010 at the BIG Television Awards here. He says TV is a "complex and vibrant" medium and he admires the small screen fraternity that works tirelessly.

"So I went to the BigFm TV Awards and came back with one .. the most distinguished personality of the year in TV for the last year...," Amitabh posted on his blog bigb.bigadda.com, following the event Tuesday night.

"The TV industry a revelation for me...a most complex and vibrant medium .. a difficult medium to be in, and most of all a tough medium to be connected with. It takes the mickey out of you when you are asked to perform for it...and I speak from experience," he wrote.

"Hence my great admiration for all those that are connected with it, and continue to work each day for its betterment .. takes a lot out of the artistes and personalities that labor day and night in its working," he added.

Amitabh made his TV debut with the first season of "Kaun Banega Crorepati" in 2000, against the wishes of his family and friends.

"When I was given the opportunity to work in it for the first time for 'Kaun Banega Crorepati', everyone told me I was making the biggest mistake of my life. Today, after receiving recognition, I am happy to have made that mistake!"

"Kaun Banega Crorepati" is the Indian version of the internationally popular "Who Wants To Be A Millionaire?" The upcoming season will be aired on Sony Entertainment Television.