Over 500 comments ! Must have an Anniversary every day BigB 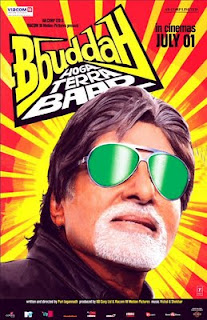 Jalsa , Mumbai       June 3/4  , 2011    Fri/Sat  12 : 52 AM
Whoooaaah .. ho ho hoo  ! Over 500 comments ! Must have an Anniversary every day to get those kind of numbers ! But seriously though, thank you so much for all your affection and love and greetings and blessings .. we could actually feel them the entire day. And when it became overwhelmingly large the heavens opened up ! Thunder and lightening and slashing rain, hard, merciless in its strength and more than welcome ! A repeat almost of that day 38 years ago. Just that, it wasn’t as harsh as today.
So it began late evening, the clouds and rain. Suddenly getting very dark with the black rain laden clouds flying in low over the city and then wham ! It almost stopped all activity in and around. Abhishek and the bahurani were taking us out for dinner, and it almost got cancelled. But we persisted and went ahead. A lovely new place called TwoOneTwo at Nehru Place. Great food, good pleasant service and Ketan who looked after us, turning out to be the son of the actress from my time Sonia Sahni, who had worked as Hema Malini’s friend’s in a film we did together -Kasauti ! A small world indeed.
We asked Ketan the significance or reason for naming the place so - Abhishek and me having a side bet on it. Me saying it had something to do with New York, because of 212 being the area code for NYC in their telephony, and he disagreeing with some other reason, not the right one. Turns out it had something to do with the boiling temperature of acqua ! Water boils at 211 degrees and turns to steam at 212 degrees. Steam being symbolic of going beyond boiling, the ultimate, and also it being a power that runs an engine - so twoonetwo !!! Cute !! And no … no one disturbs you or mobs you either .. as some of you had expressed concern !
A fulfilling day ! Some good discussions with the team on the promotions, some good ideas being formulated, but by and large a very healthy looking outlook towards the film and the way forward. A lot of the suggestions that had voluntarily come forward are all being looked into and soon some of them shall be incorporated, executed and connected to many of you. I know that you wait impatiently to push this film ahead, but there are several factors that need to be looked into on a wider scale and which is something that may not occur to you immediately, but trust me, all is in good place and time ..

So …. now what does all those who were lamenting the lack of publicity have to say .. This is just Mumbai, and in select places .. not able to catch the entire city’s pictures .. there are 650 of these and these sizes all over the country. Some of the pictures have been taken and posted to give you also a perpective of the size of these banners. They are massive. Comparisons are also given so you can gauge what the others are doing and what Bbuddah is. Do not forget that the recent films like Ready were put up just a week before the release, which incidentally was today. The practice of putting up the posters of Bbuddah a month before is unprecedented. Now this is just the beginning, many other aspects are being planned. You would have to wait and see !
God night dearest ones … love and more !
Amitabh Bachchan